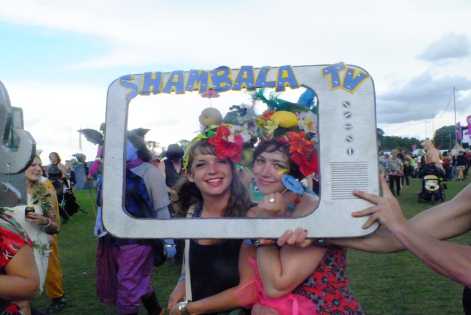 Last weekend party people populated Kelmarsh Hall. The family-friendly, party-vibe festival was fun-filled from street theatre, to dancing and sporting madness in the shambolympics arena. Then there's the crazy costumes and the neverending carnival line (over 1000 people took part), which left everyone flabbergasted.

Here, you only have to stand still for two minutes and entertainment will come to you! You'll often find yourself chilling in a cafe and before you know it a band will start up and everyone will be dancing! My favourite venue though, was The Social Club! With comfy seating booths, an awesome circular dancefloor, and a theatre-style stage. Plus there's a brilliant atmosphere: for instance when there was a power cut halfway through the 'This is the Kit' set the unstoppable crowd started doing the conga - and I mean the entire crowd!

A musical highlight was political, punk-influenced artist Billy Bragg who brought a tear to my eye. With still an ever-improving voice, he was on top form and took the festival by storm. As usual, he didn't hold back with his political views - but that is why I love him.

There was a safe, contained and spacious kids field that played host to a ton of activities including gymnastic classes with the ever-patient Audra and Jeremy that went on all day so you could join them when ever you wanted to. You could make masks, create costumes, design jewellery, and there was circus skills and trampolines - all for free. This year there was evening-time magical family fun to discover on site, like a funfair, kids disco, fire shows, wandering entertainers! I think this attention to everyone's needs made my younger sister's festival.

It is clear that at Shambala the line-up is only part of what's on offer. I stepped back in time with the likes of a free vintage 50's hairstyle, a game chair in which you can play classics like Pacman, and a dancefloor where you only had to stamp to change the era!

There were lots of spare slots for musicians and DJ's to play to a fully appreciative and up-for-it crowd. As usual I took full advantage of this and managed to get a set broadcast on the Shambala radio.

Lots of us loved sitting down and chilling out in the Wandering Word. The stage played host to charismatic, characterful, punk-poetry originator John Cooper Clarke and bottleneck blues rocker John Fairhurst! Another venue saw Tony Benn and Roy Bailey talk - they gave me goosebumps and were as inspirational as ever.

The site is pretty compact so you can get about fairly easily. Despite the party throng you can get away from it all. The Enchanted Woodlands were magical and peaceful with outdoor theatre space, intriguing sculpture, and yet another covered venue.

The big finale was 'the big burn': a breathtaking firework display and the burning of a massive wooden pyramid. It may still be burning when I go back next year!

I had a great time - so much so I lost my voice and my shoes. Overall my first Shambala was fun-filled and unforgetable!

Published on 29 August 2012 by Ned Mansfield