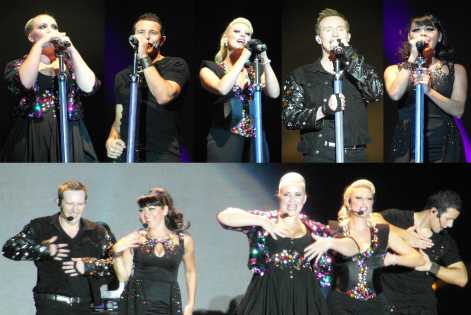 Four great days of entertainment were set to be bought to Rochester castle this July and it was definitely that on Thursday 19th when 90’s pop group Steps were headlining the event.

Support acts included Ukrainian singer Kamaliya Zahoor, new girlband Vanquish, who have already supported Westlife on their tour this year. Plus Pete Waterman’s newest signed artist and fantastic Abba tribute Bjorn again took to the stage and got the crowd ready for Steps.

After recent downpours throughout the week, it stayed impossibly dry when Faye Tozer, Ian ‘H’ Watkins, Lisa Scott-Lee, Lee Latchford-Evans and Claire Richards hit the stage. Fan’s were definitely excited about the Steps reunion, with many sporting t shirts from the bands successful 2012 tour earlier this year and cowboy hats were also seen on many fans heads to represent one of their many famous song’s ‘5,6,7,8’.

Steps took to the stage with ‘Deeper shade of blue’ and ‘Here and now’. Though after their third song there was a slight technical hitch, however this gave fans time to get their adrenaline going again and the band were soon back with ‘Better best forgotten’. Ian ‘H’ saw the funny side of it by adding “I know we're playing in a castle, but you would have thought somebody would have put 50p in the meter” when they returned to the stage.

Each member of the band had fantastic vocals and this was definitely proved when they performed some of their slower tracks such as, ‘One for sorrow’, 'Love's got a hold on my heart' and 'It's the way you make me feel'. They then speeded things up with ‘Stomp’ and ‘Chain reaction’, as well as including their iconic dance moves, where the entire crowd joined in.

The concert was held on the beautiful Rochester castle grounds and it seemed that fans of all ages had turned out to see the band perform live, some who had obviously been fans for years and little ones who had recently been introduced to Steps fun music.

Steps clearly liked Abba, with Bjorn again as one of their support acts and then they covered one of Abba’s famous hits. The five-piece finished with an encore of the Bee Gees' hit ‘Tragedy’, which was obviously the one the crowd had been waiting for.

After 10 years since Steps left the stage it was easy to see that none of their fans had left them since they announced their split. Some of their most dedicated fans were seen in the first few rows away from the stage, with some even travelling from Wales to see their iconic 90’s idols and they were definitely going home thrilled at the chance that they got to see the group live in concert.

Published on 23 July 2012 by TasminAnderson