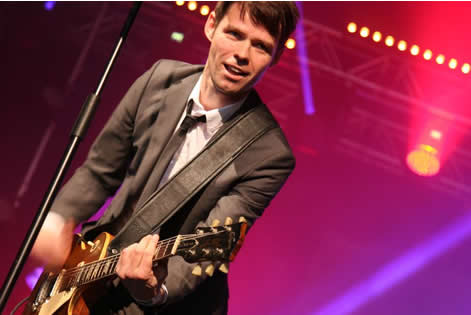 Only in it's fourth year, the Relentless Freeze Festival is the UK's only snow, ski and music festival. Set in the industrial grounds of the iconic Battersea Power Station, the organisers crammed an impressive array of activities, tents and spectacle into the site.
At 32 metres high, the skiing and snowboarding ramp stood as the centre piece of the 2 day showcase and lived up to expectations as over a hundred athletes battled it out for the 6 titles up for grabs. James Woods claimed the Ski Union Battle of Britain title and Jossi Wells placed first in the International Freestyle Ski Big Air Finals on the ski front while Billy Morgan was victorious in the Battle of Britain Snowboard finals. Full run down of results and interviews can be found on the Freeze Festival website
With my snow sports knowledge being limited, I was more than keen to have a look thru the 5 stages of music on show and wasn’t disappointed with the offerings as Rizzle Kicks kicked of the main Friday offerings on the main stage with some questionable dance moves and a set list that included their current chart hit ‘when I was a youngster’. Dub Pistols Live were next and their cause wasn’t helped by the poor sound or the overcrowded stage so I made my exit and stumbled on a gem in the Relentless dome in the shape of Spycatcher. Catchy songs and energetic performances in this tent made it a clear winner for the day as both spycatcher and Xerts put in powerhouse performances to a painfully small crowd. The Tuaca Lodge, Apres Ski Bar and Desperado dome were, to fit a better description, bars with Djs playing throughout the day.
Zane Lowe and Groove Armada rounded up the day with the former pulling out some crowd favourites.
The Friday was overall less crowded and missed the vital spark, perhaps due to the fact many of the festival goers were only keen on seeing the Snowboarding and skiing finals or The Streets last UK show on the Saturday.
Saturday was almost entirely a different vibe from the onset as the site was completely packed, with the excitement running through the air at the prospect of seeing the competition finals and The Streets. The Relentless Energy dome again seemed to be the place to be with both Dirtyphonics and Modstep completely filling out the tent with long queues outside of more people trying to get in. Perhaps the festival could have anticipated this with the massive rise in dubstep and the popularity of these artists. Modstep put in a real barnstorming session as we got caught up in possibly the first moshpit of the festival and they are definitely one to look out for in the next couple of years. Over at the Main Stage The Joy Formidable played the crowds entertained despite a power cut and delivered a strong performance. Next on were Everything, Everything who played an average performance... Finally the moment everyone was waiting for The Streets, appearing on stage a few minutes early played a set of his most loved favourites, with a songs such as Blinded by the Lights, and finishing with Dry Your Eyes Mate I really did have to dry my eyes, however he came back with an encore finishing off with Fit But You Know It and Going Through Hell, he certainly ended his show with an almighty bang and an air of sadness for those watching. I was lucky and managed to catch the end of Does It Offend You, Yeah? It's a shame they were on at the same time as The Streets because as usual they delivered, yet again perhaps the festival  should have worked around this giving them more of an audience...
What more can you ask for than good bands, beautiful snow sports, a cheap cigarette stall selling Vogues for only a fiver and a vast array of entertaining bars and activities to see and watch, as well as being completely child friendly! The Skiing and Snowboarding for me was a new experience and an impressive sight to see. Behind the scenes the snowboarders were friendly with one telling me how exactly it works. Although knowing absolutely nothing about the sports as a first time watcher I was just as enthralled as those who knew exactly what they were about.

Published on 02 November 2011 by sarahpeace