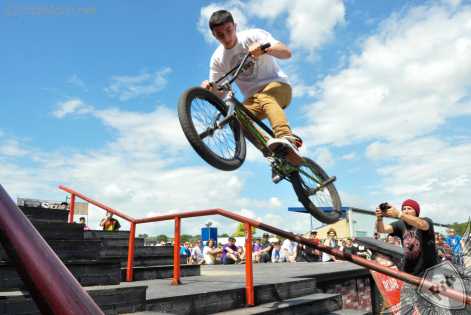 Upon entering the festival, everyone was praying for a dry weekend. We arrived there at about 8am Friday morning, setting off at 5am to beat the traffic, after traveling back and forth from campsite to car with our various belongings, we were eventually let in to put up our tents at about 10.30.

Upon sorting everything out, the heavens opened to send some drizzle our way, little did we know that this would last for the duration of the weekend. Although wet, everyone’s spirits were still not to be dampened, NASS festival had begun!

The site was arranged with many different trading stalls, food wagons, fair rides, and indoor and outdoor skate parks, you could pretty much buy anything from sport accessories to flavoured oxygen there, the festival food pricing was what you would expect as well, but that didn’t stop everyone from queuing nearly as long as it took to get into the festival for something that was going to be consumed within the space of a few seconds, but the wait was well worth it once you got your food of choice, from full English breakfasts to foods from the orient, there was a food wagon to suit everyone’s needs and desires.

The festival a few years ago was originally focused around extreme sports but the line ups for the past few years have seen more and more bands and artists coming to play and get involved in the action, and this year was no exception to that, including some of the biggest names in dubstep and drum and bass, from the likes of Dj Fresh Live, Datsik, Andy C Alive, Doctor P, Friction, Roni Size to name a few, as well as some exceptional live bands:  Rolo Tomassi, While She Sleeps, Lower than Atlantis and the mighty Sum 41! What more could you want from a festival weekend with this exceptional balance of sports and music.

During the day going through the trade stalls and seeing many people ride around on their own skate board’s, roller blade’s, scooter’s, BMX’s and even 80’s style roller skate’s, everyone found themselves drawn away from the grey weather to see the inside skate parks, which was to house the various tournaments ahead. Ranging from huge vert ramps to spine boxes and rails, these courses was designed to suit everyone’s needs, allowing riders, skaters and bladers to create intuitive, creative and incredible lines setting the standard for all other amateur and pro riders alike, and in the corner was a huge digital score board ready to begin tallying up each competitor for the challenges ahead. With competitors coming from all over the world to compete, and a huge panel of judges to assess each sport and heat, you really get a sense of the scale and magnitude of the festival.

Due to the weather conditions outside not showing any signs of stopping, it was making camping conditions in certain campsites incredibly muddy. Green camp was possibly the worst out of the selections on offer, with rows and rows of tents pitched in what can only be described now as being a boggy marshland, campers were dressed more suited for a fishing trip rather than a festival, with combinations of wellingtons and rain coats. Campers that didn’t venture out to check out the sports events were waiting out the storm, relaxing, socalising and anticipating the evening music events to follow.

After each long day of competitions and determination for competitors, the evenings set in to give everyone a chance to relax and have some fun, after knocking back a few drinks and dancing into the night, the last thing on anyone’s mind was caring about the rain anymore, it could pour as much as it wanted this weekend, everyone was having way too good of a time to care, sadly 3am rolled around each night a lot quicker than everyone hoped it would, and at which point everyone was forced to retire to get a good nights sleep ready for the following days installments.

By Sunday everyone had given up hope on the weather and had accepted the fact everything they had with them would potentially get soaked, but it wasn’t till I was pleasantly woken up in my tent by sun beams from heaven shining down on me that I believed it, the clouds had dispersed and blue sky’s had appeared to kick off the final day of this already incredible festival. With the sun now shining brightly and everyone hyped to enjoy it the outdoor street course and the dirt riders bmx trails was opened ready for competitors, and to kick off the outdoor competition events for the afternoon.

With this new unexplainable weather shift everyone was now in overdrive flying around on every brand of skateboard, bmx, scooter you could think of, soaking up as much of the sun as possible, making up for what felt like three weeks of monsoons in the previous two days, one couldn’t have asked for a better day to conduct the final heats on, the weather really gave the competitors the perfect conditions in which to compete for the top spots.

Come late Sunday afternoon everyone was dismantling their tents and leaving the festival grounds, with only one challenge left of getting out of the swamped car park, the weekend was coming to a close, but what a hell of a weekend it was, music, sports, adrenaline, tension, atmosphere and memories. It had everything a festival needs but with so much more, most people go to specific festivals based solely around music, but I tell you, you haven’t been to a proper festival till you have experienced NASS for yourself.

Published on 12 July 2012 by PaulMalinPhotography