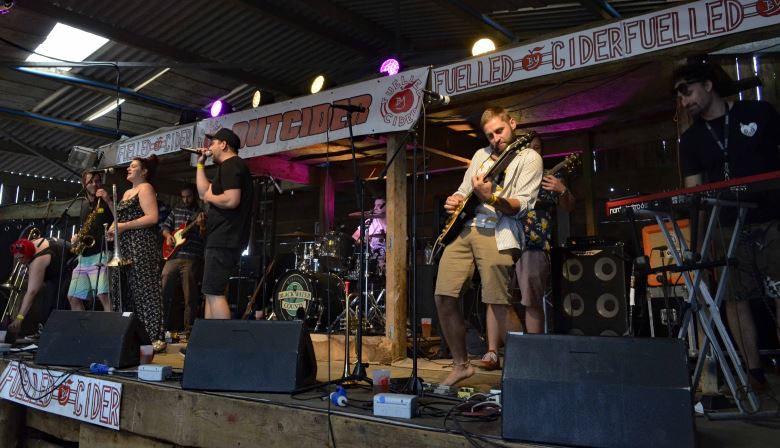 The advert said “Fighting their way out of England’s cold, conformist, consumerist majority come The OutCiders.

No tribute bands. No X-Factor. No Carling lager. No hipsters. No tossers”

This all sounds like something straight from the 80`s anarchist peace protest era, so I thought I’d take a look, not that I’m even close to being an anarchist. But festivals can get bogged down in the commerce side of life, so too can people, each demanding higher standards of the other, when sometimes all you want to do is get off grid in every sense.

Its location is Fernhill farm in Somerset and just the journey to and from the site alone is worth the effort, particularly the Cheddar Gorge route, a totally stunning natural phenomenon carved out through the rocks of the Mendip hills.

This festival is set out on an actual working farm, not a facade re-created to make you feel you’re somewhere you’re not, so it can get dusty and you`ll likely be sat on huge feed bags filled with wool watching the bands and keeping a careful eye out for gifts from the animals if you’re walking around in sandals, but it all feels so real and among nature.

Performances take place in two barns and to be fair, with all the difficulties of a rattly old barn to contend with, the sound was extremely presentable! These barns are plenty big enough to house the entire population of Outcider festival, so no one need get stuck out in the rain to watch the bands, and as one band finishes, the next starts in the other barn, it all works really well.

This is a small festival, even by other “small” festivals` standards, with just 500 capacity, it’s almost a wonder how they can afford to pay for nationally renowned festival bands artistes like Beans on Toast, Gaz Brookfield and the Skimmerty Hitchers, let alone the super cool Alabama 3, but as their promo would suggest, I don’t think they are in this for the money.

As the name implys, this is a festival that is no way shy about the fact that it cites Cider as one of its main inspirations and the bar is rammed with different varieties of the stuff, the bar is in a separate tent out in the farm yard and was very well manned, it seemed that everyone working there mucked in at whatever they could do to help, some of the bar staff were also members of the punk karaoke band that were just kicking off as I arrived on site Saturday lunch time, a really good tight band and it would have been rude not to have joined them for a song or two!

The bands on the bill were a great mix of styles, not just the punk that you might think you were in for, or the advertised headliners, but Mad Apple Circus`s ska hip hop had the punters rockin` from the off, the raw punk blues and thoughtful song writing of the Husky Tones, the frankly, disturbing antics of Rev Schnider and the band of Angels, the tongue firmly in cheek, hip hop/reggae of Monkey Bizzle, the rawkus tones of the Wood Burning Savages, Outcider heroes The Skimmerty Hitchers, and The Barstool Preachers all  give this festival something more than you might see at others.

This appears to be a child free festival, I say that because I didn’t see any and because unless your child has been brought up in the 70`s when watching your parents getting drunk, listening to Live music and the occasional game of I spy was enough to entertain, there is really nothing here to keep kids occupied, it is also quite noisy late into the early hours, so probably best to leave them at home anyway.

The toilets were an unexpected luxury for such an earthy location, quite rustic, but plumbed into the mains, with a proper flush and not oversubscribed, which can be the case at many festivals

Walking down to the site through the camper van field was reminiscent of a scene from Mad Max, littered with converted busses, camouflaged & graffitied battle trucks and vans appearing match fit for the day of the revolution, but the truth is, I’ve rarely met such a nice bunch of people, mostly drunk, yes and some proper characters, but sound as a pound.

In spite of its generally unpredictable weather, Britain does festivals better than most and there must be hundreds of this size up and down the country each year, so why would you pick this one?

Well, first off, it literally does what it says on the tin, it’s about music and cider (with a nod to the real ale brigade) with no pretence, there’s no heavy handed security, the punters all seem to know each other and look after it for their own good as much as the festival and now in its 6th year, somethings obviously working.

Even if youre the type of person who might be put off a festival with this type of public image, I would give it a go, i`ts just so friendly, reasonably priced, relaxed and genuine, and I saw no Anarchy or signs of civil uprising.

Published on 09 August 2019 by Keith Dennelly