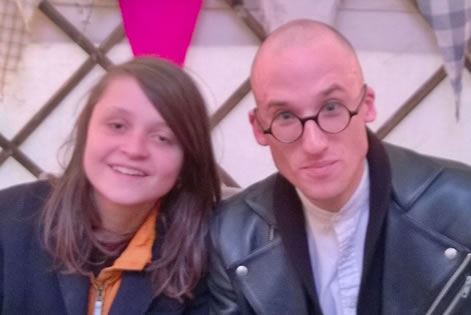 'Has Hay-On-Wye ever seen a crowd surf?’ cheekily quips Mr Bruce before launching himself onto a crowd of philosophers turned party people. The Correspondents have packed out the room, proving they're a not-to-miss live act wherever they are - whether it's Secret Garden Party, Glastonbury or Hay Lit's little sister upstart festival HowTheLightGetsIn.

However The Correspondents are much more than the crowd-pleasing Kings of electro-swing. Their sets are consistently exhilarating and entertaining to watch not only because of Mr Bruce's theatrical stage antics but because they also feel like a breath of fresh air. There is always an unpredictable element - though they play their distinctive blend of electro, drum 'n' bass, witty lyrics and swing, there is often a twist in proceedings. 'It depends if we think people are going to go for it.' Mr Bruce tells me, regarding whether there will be any Jungle in the set - from seeing them go all out on Jungle before, you can tell the band's satisfaction of sneaking it in at the end of a sweaty set - 'we might just force it upon them and they'll have to deal with five minutes of Jungle.'

It's not just the UK live circuit that The Correspondents have in their hands though. Over in Australia they are the subject of a new 11-cast circus, theatrical, cabaret 'experience' dubbed 'Fear and Delight' after one of the band's best-loved tracks. 'It's really confusing to be honest. I'm confused,' Mr Bruce eagerly tells me, 'we were asked to collaborate with a whole load of circus performers, acrobats, dancers, musicians and clowns, to put together a show that is based on the themes within our music... ...It's like getting loads of really amazingly choreographed music videos with really talented performers and acrobats throwing themselves around, then shaping that into an hour. These people are doing things I could never do in a million years!! It's exciting.'

Topping off an ambition-fuelled year for the duo is a never-seen-before reimagining of their repertoire for their Secret Garden Party and Womad sets this year. 'We are going to be putting a band together, an actual live band for Secret Garden Party and Womad... ...There'll be a certain amount of playback. Some tracks are actually getting re-written. We use certain melodies that already exist and then we'll adapt them. Some are relatively simple, so it's nice to have a talented keys player like Graham to improvise over the top,' Mr Bruce tells me, clearly revelling this new project, 'It's going to be weird having other people onstage, I'm not sure how my ego's going to deal with that!'

Despite their multiple outputs Mr Bruce thinks 'multi-platform artist sounds very grandiose, I think we just do what we do. Chucks is a really good producer so he does all that stuff. I definitely see The Correspondents as a multimedia project. I work as an artist as well. I think of things in terms of aesthetics and the overall look... ...It's a cool thing to have control.'

Mr. Bruce also has no worries about his infamous dancing, outfits that only he could pull off and much-loved live act, overshadowing his music. 'I think as long as we have an open discourse within the band then it's fine.' The music is never ignored by fans or critics, nor should it be. It's an instantly infectious sound that strikes the balance between old school hip hop, the vibrant electro-swing scene of recent years, jungle and drum 'n' bass. Coupled with Mr. Bruce's witty, observational lyrics, eight years on from the band's inception, they're still bursting with ideas.

Considering the band infamously put off releasing their debut album 'Puppet Loosely Strung', for seven years due to the amount effort they were putting into live shows, it surprised me when Mr. Bruce told me that 'Sometimes when we make tracks, we think that's a dance floor friendly track, but other tracks definitely aren't and we never really play them live. Often we make a track and then try it out on a live audience even when it's completely unfinished and see how it goes down.'

Whatever the Correspondents do - whether on record or on stage - it never fails to be innovative, mesmerising and original. With every year topping the last for this unmissable band, the UK dance scene's brightest talents are a long way from burning out.