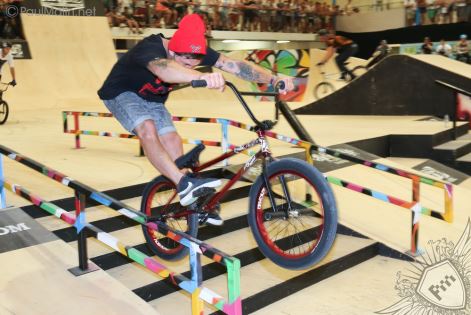 NASS is a beautiful blend of action sports by day and genre varying music by night. Whether you bring your wheels or not, there's a variety of adrenaline fuelled activities to take part in or just to observe. Throughout the day there were such events as free running workshops, FMX demos and an array of white-knuckle rides to try if you dare- leaving no excuse to sit around and relax. This festival is not for the faint hearted.

The Festival is located just outside of Bath, at the Bath & West show ground in Shepton Mallet. This is one of the smaller festivals in the UK, alongside its sister festival Boardmasters, NASS was that perfect balance of busy but not over-crowded. The festival site itself is actually fairly compact, a relief for most as it meant not having to trek a huge distance from campsite to main arena and vice versa. One thing I will recommend is to check the prohibited items before packing your bags for this festival if you are planning to camp, glass bottles and aerosols are on the no go list for example, checking these details out before hand could save you a lot of time. You can even pay a bit extra for a VIP pass that can give you access to a campsite even closer to the main arena if you so wish.

The campsite opened at 4pm on Thursday, with the pro park open for practice sessions and the warehouse arena opening for a silent disco, the main events kicked off the following day. The weather was the polar opposite to the year before but just as extreme, with sunshine beating down all weekend, this definitely added to the festival atmosphere.

During the daytime across the three days you could head to the pro park or mini ramp to watch a variety of action packed and adrenaline filled sports, whether it was bmx, Inline or skateboarding, you could see the best in the business compete for prize money. On entering the pro park an array of spectators could be seen fighting for space around the overlooking balcony to get a closer look, with cheers filling the arena in response to any big tricks an electric atmosphere could be felt throughout. These events were really at the heart of what this festival is about- pro athletes showing us their skill set and the extent to which extreme and street sports are growing from strength to strength.

This year animal set up a large mobile rig on the festival site. Called the Animal WD-40 action Sports tour, the likes of trials rider Martyn Ashton and amazing jump rider Blake Sampson showed the crowd what they could do during shows spanning over the three day period. As well as watching their awe inspiring and sometimes terrifying tricks, there was also the chance to win some limited edition gear, leaving the crowd that gathered satisfied fully.

On Saturday the warehouse played host to a live art battle from Secret Walls: two teams, one white wall and an array of black markers, the teams had a matter of hours to do battle to win over the crowds favour. In the interlude incredible sounds from the beat boxer Reeps One was welcomed to the stage. Secret walls has pushed boundaries over the last few years and offers aspiring artists a platform to showcase their work internationally, this was a real highlight of the weekend for me.

The evenings played host to artists covering a spectrum of musical genres, including Rock, Punk, Dubstep, DnB, Hip Hop and House which ensured that this festival catered to everyone’s taste. Starting with the main stage; NME award winner Katy B got the crowd dancing with a solid stage show including some pretty impressive dancers on the Friday night. On Saturday night the main stage welcomed Hip Hop legend and rap icon Nas who drew in festival goers of all ages, with the crowd spilling out of the main arena you could tell this was an eagerly anticipated event. He pulled hit after hit out of the bag from a career that has spanned over twenty years. Prior to Nas on the main stage on Saturday was Skepta who attempted to instigate NASS’s biggest mosh pit with good effect.  Other acts to grace this stage over the two days included Monsta from skrillex’s label, live band Hadouken! Zane Lowe, Kids in glass houses and Loadstar.

This year NASS had two indoor dance arenas for festival goers to carry on dancing until the early hours; the drum and bass arena and the get darker vs is this is dubstep arena. Digital soundboy took over the get darker arena on the Friday, fronted by veteran Shy FX and home to the likes of breakage, B.TRAITS and Dismantle, this label has gone from strength to strength in the past year and definitely didn’t disappoint. On the Sunday, the master that is Benga presented this arena, displaying dubstep heavy weights including Roska, cookie monsta and Funtcase.

Andy C took over the drum and bass arena with a fierce two hour set on the Friday. Regarded as one of the world’s most influential drum & bass figures, the crowd went off. Other drum and bass big names included Wilkinson, DJ Marky, Crissy Chris and the mighty hazard.

Back for the 4th year running were the collective Sika studios bringing with them the cream of underground UK Hip Hop and Grime. Throughout the day and into the night you could relax in a covered chill out area or get involved in the dancing whilst listening to live UK hip hop acts. In keeping with the festival theme Sika studios also had Breakdancers, Graffiti artists and fire dancers entertaining festival goers.

Overall this festival caters for both music and sport lovers, with no shortage of activities to take part in or watch-there’s no excuse to take it easy, For the adrenaline junkies and music lovers alike.....this one’s for you.

Published on 17 July 2013 by Phoebe Arbuthnot