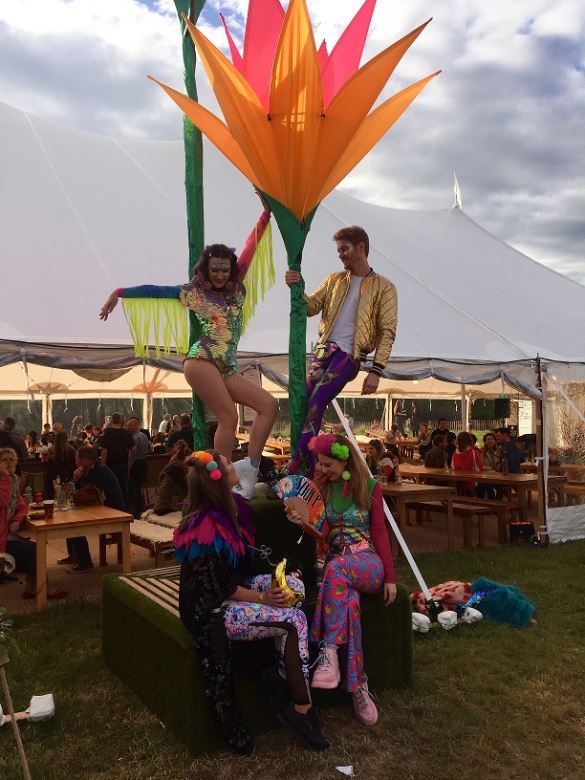 Even with a trio of degrees under my belt there are moments when I can feel horribly dim and these times were unnervingly frequent at HowTheLightGetsIn. I have never before been to a festival populated by such a preponderance of professors, scientists, intellectuals, politicians and studious, er, students – indeed many of the conversations I overheard in the bars and campsite were more than worthy of the manicured lawns of Oxbridge.

Hosted by The Institute of Art and Ideas, HowTheLightGetsIn bills itself as the ‘world’s largest philosophy and music festival’. And it very probably is, it’s a limited field after all. It would though be a fiction to suggest that this is where this mid-sized festival begins and ends – there is something more or less for everyone and a healthy smattering of good-timers and party animals, young and old, can be found milling around doing their lowbrow thing. Indeed after my initial shock at the brain-boggling nature of the talks I quickly found my level: comedy, bands, dancing and – just once your honour – wanton drunkenness.

Talking of music, the irresistible and sparkle-tastic satirical duo Bourgeois and Maurice were an absolute highlight of the festival for me, a gorgeously moreish delight ingested best, I recommend, when somewhat the worse for wear. For me though most of the music on offer, and there was plenty of it, rarely scored higher than lively-foot-tapping on the international ‘lose yourself to dance’ scale, with only Mr. Tea and the Minions and CoCo and the Butterfields really getting my body awkwardly thrusting and pirouetting. Irish comedian Eleanor Tiernan was another highlight of the weekend, she was brilliant and well worth searching out, albeit I may have been put off vaginas for life (yikes!), and Brighton based Laura Lexx wasn’t half bad either.

In a forlorn attempt to convince myself of my immense cleverness I attended a number of the many hugely well-attended talks and debates that were held over the long weekend. Notable amongst these were The End of the West, A Mad World, The New Politics, Populist Correctness, and an interview with planet-brained Roger Penrose. I would expand in detail on the content of each but, well, let’s just say it’s still, er, sinking in. Ashamedly though I was busy washing my hair for the majority of the talks, not least The Case against Reality, Philosophy of the Senses, Truth, Post-Truth and Technology, Economics and Uncertainty, The Mathematics of Thought, and Pride, Prejudice and Philosophy. Phew, I need a lie down!

Luckily a debauched Saturday evening banquet proved an excellent antidote to any brain-swelling issues. I wouldn’t go wild about either the quality or quantity of the food, but it was excellent to drink a bottle or two of wine with a table full of highly articulate strangers, many of them speakers at the festival (some very well known), and witness their articulate-ness gradually – well pretty swiftly actually – declining into ‘I loff you, I really do’ territory. Fortified by this combination of wine and fallen gods I felt liberated to dance the night vigorously away in the crowded disco tent. I even remember parts of it.

The festival site itself, on the edge of Hay on Wye, was an unusually dense mix of music and talk/discussion venues, a bijou healing area, bars and shops. In some ways this somewhat cramped set up made it feel more like a visiting fair than a festival, or perhaps a pop-up village high street, which took a little getting used to for a seasoned festival goer such as myself. While I missed the sense of space of many festivals, significant benefits of this design included the ease of shuffling from venue to venue to check out what was going on and a consistent buzz as it felt pretty busy even at quieter times. The magical Wye river ran along one boundary of the site but unfortunately it felt rather neglected as most of the tents faced away from it; this wasn’t helped by it being fenced off – health and safety apparently, gone mad obviously. A shame.

I also had mixed feelings about the camping. The campsite itself was very fine – albeit the toilets and showers, although good quality, were as ever not numerous enough – but getting to it involved leaving the festival site, passing a Coop and crossing a fairly busy road, which made it a challenge to stay in the festival bubble. Having said that it was great to be able to walk into lovely Hay on Wye and mooch about for a bit, as well as wander down to the far-too-corporate and overcrowded literary festival on the other side of town and have a poke around.

HowTheLightGetsIn is also held on Hampstead Heath in London (in September), and coming from near Brighton – with traffic it took six hours to drive to Hay – I suspect this is where I’ll head another time. And there may well be another time as, all said and done, it’s a very well organised festival, very intelligent, definitely worthy and worthwhile, and a lot of fun. It’s most definitely not a festival for serious stoners though and alternative types were, in truth, in short supply. The vibe is more Radio 4 meets the Edinburgh Fringe, and it’s certainly none the worse for that. Attend, enjoy and have your mind totally boggled.