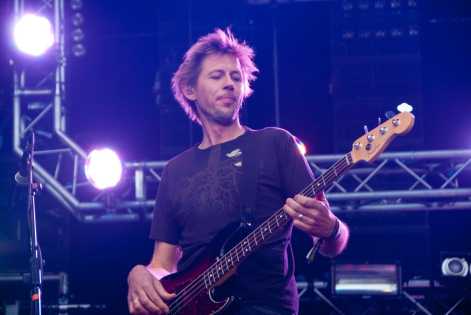 Knowing for a fact that Lovebox, despite its relatively young existence, is one of the most rapidly growing year on year festivals, gaining its popularity from raving reviews, quality performances, great atmosphere and positive vibes I was preparing myself for an almighty weekender.

Situated in Victoria Park, the oldest green hang out in London, Lovebox put itself in a very heart of London and the line up marking its10th anniversary was just jaw-dropping and breathtaking! A real jubilee for soul and deep music lovers and an unmissable chance to see the Royals – Her Majesty Chaka Khan, Her Craziness Grace Jones, the coolest princes in the house – Andy Cato and Tom Findlay (Groove Armada), joined on stage by their fairy Godmother Candi Staton.

The weather was a bit unpredictable, but didn’t stop anyone marching steadily towards the gates; it rather was fantastically expressed in looks of the festival goers – the usual and standard shorts, socks, wellies, waterproofs, warm jackets, tiny tops, hoodies and hats. But then there were flowers, feathers, animal fancy dress, G-strings (literally just thongs, on men), stockings, balloons, blow up toys, flags, body painting and so on.

Colourful as it was Lovebox seemed very inviting and friendly – the staff at the box office, catering and gates were nice and organised and the police’ superb discrete approach to sniffing around was in more of a casual walking the dog in a park style, rather than aggressively acquiring a great deal of illegal substances.

The event was organised like a funfair; stages at opposite ends and the gap in the middle filled with stalls, carousels, the things that tip you in the air and make me feel sick by just looking at them, tobacco and beer bars and my favourite, the herds of festival goers: organising themselves in mini tribes - on benches, blankets or each others laps, loved up, cuddling, canoodling or collapsing, indulging themselves with every possible nectar on offer.

The choice of food was mesmerising – anything from ostrich burger, Thai, Indian, the usual chips and burger suspects to fancy salad boxes and crepes.

If you could not be bothered to eat or even stand in the queue to fetch a drink you could get very lucky and meet one of the “camel guys” - geezers with tanks on their backs filled with Tuborg cider, poured for you, on the spot, in the duration of an average pint pulling in a pub but for a mere 30p more than at the bar! Massive timesaver if you want to hop the stages.

An impressive gala of acts entered the main and side stages on the Saturday – Rita Ora, Crazy P, Adam F, Kelis and Maverick Sabre, but the look of anticipation on people’s faces as the dusky evening was falling down indubitably was proving that Groove Armada, followed by Friendly Fires were the most desired. Lot’s of acts that I wanted to see were on at the same time and I found it hard to stage hop and enjoy the march through the muddy funfair bit in the middle, while missing out on the music.

There was a lot of interest and joy of ravers at the NY Downlow, a little crowd was admiring the swivels and pirouettes of the drag queens and trannies on what appeared to be Hotel ruins stage and the inside was filled with a dark, deep house beat, very much in tune with a slightly seedy, dark atmosphere inside.

But by that point we were all making our way to the main stage eased by soulful Emily Sande who warmed things up with her amazing repertoire and strong vocal chords. Her own version of One Love made everyone sing and her beautiful finale was loudly cheered by the crowd’s chorus to her famous “Next to me”.

I got to talk to a 14 year old girl right at the front barriers of the main stage. Her eyes gleaming/glaring, cheeks painted in orange and black Groove Armada logos – it was her third Lovebox, and her escort’s – that is dad of course - fourth. Both devoted fans and dedicated family style ravers who follow GA and Lovebox year on year. Good on them, what a lovely people!

I headed backstage not long after as GA kicked off with their most famous tracks, instantly cracking up everyone, creating an electric energy and waves of frantic dance moves. With help of three singers GA proved again to be the best and delivered an outstanding performance.

Sing-along and dance-off carried on to …., but the pinnacle was when Candi Staton came on stage, with GA’s own Veba as her backing vocalist and they sung together “You’ve got the love” flawlessly!

The GA performance finished with “Shaking your ass”… Oh yes, I was shaking my assets – I also danced my socks off and my calves are hurting till today from jumping up and down. The ecstatic crowd was shouting, whistling at the back, front and centre, and I vividly remember a girl scowling behind me “they are so good, I can’t take it anymore”.

Friendly Fires were amazing, and I have known them before for their impeccable live performances but on this occasion I admired them from a short distance, having a good hard listen but not admiring the visual feast as I was sucked in backstage with the crazy entourage of GA.

Sunday was so much calmer, in a broad sense – the weather was less dramatic, wind wasn’t so gustily, the temperatures stabilised and the lesser crowd seem to walk at a slower pace.

Knowing that the Chic, Chaka Khan and Grace Jones were taking over the main stage that night, the park seemed to be filled with Queens of all sorts, and you could feel what a celebration was about to come.

The NY Downlow stage, massively popular on Saturday night was embedded now in the Sunday crowd and we were all awaiting the mighty stars of soul and our hearts.

The Chic performed all they most popular hits, with usual trick – let’s get as many people as possible on stage, creating vibrant, fun and easy going atmosphere – smiley faces and boogie moves were all around me.

Then the Queen herself, the fabulous Chaka Khan, looking gorgeous, brightened up the stage and sung – with a little help of all of us her biggest hits: ”I feel for you”,  “Ain’t nobody”,  “I am every woman”, “

Unfortunately there was a problem with a sound which let us and Chaka Khan herself down, as she disappeared backstage two songs in just to come back after a few minutes with a question to the baffled crowd “Can you hear me now?”

Also, I missed Lana Del Ray, who was performing at the same time as Chaka Khan, and I found that on the downside and hard to believe no one thought that same people would like to hear the both artists.

I had to leave when Grace Jones was coming on stage. Having still not recovered from Saturday night and facing a hard week of work, I had to make my way back to the gates, with a doze of melancholy and a grin on my face I closed the weekend and the Lovebox behind me – it had all ingredients of a perfect weekend I will never forget: great music, fantastic people and unmissible atmosphere.

Published on 21 June 2012 by AgataMastalerz