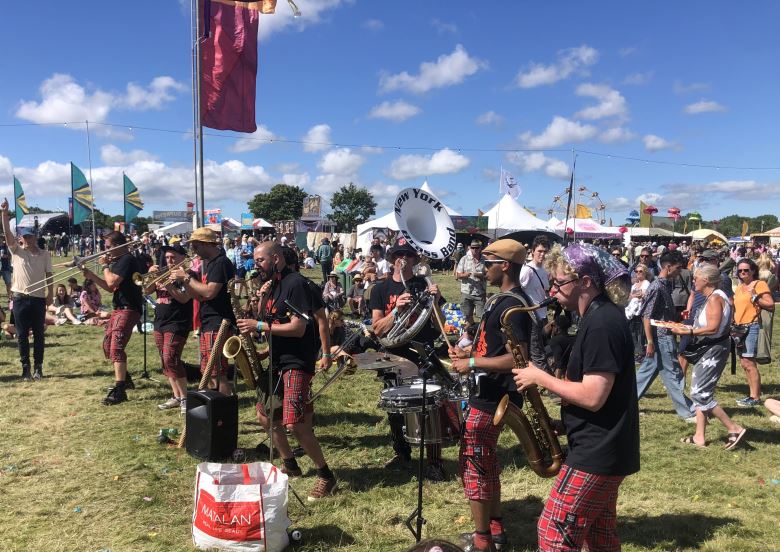 Whoever booked Erykah Badu to headline at this year’s comeback Love Supreme deserves a biscuit, and a chocolate one at that. She was an inspired choice. At 51 years old, with a voice that sounds like the errant lovechild of Billie Holiday and Minnie Riperton on acid, it seems she appeals – somewhat mystifyingly – very much to the youff. There were a fair few grey hairs who didn’t, er, totes dig her, but the swollen number of young people on site on the Saturday made proceedings feel much more exciting and relevant than usual.

Things reverted to normal on Sunday, with the usual heady array of deck chairs and pastel chinos surrounding the main stage, where the Brand New Heavies and Sister Sledge were the crowd pleasing favourites. Jazz may be the Devil’s music but these days his core worshippers are mainly be-frocked ladies and portly bearded gentlemen from Guildford.

I’m being unfair of course. While the Love Supreme demographic is primarily middle-aged and middle class there are always a fair few young people in attendance, including some still in their mother’s arms. This stunningly located festival has its own friendly and languid charm and – year upon year (excepting lockdowns) – it offers an extremely broad, interesting and often dance-worthy interpretation of jazz music. You might say there’s something for everyone.

Talking of which, let’s return to Erykah Badu. She has extraordinary stage presence and charisma. After an overlong but nonetheless rousing build up she appeared on stage looking like a moody Egyptian Goddess in a spectacular multi-coloured coat. Add a fantastic light show, a heap of enthralled young fans, and 51 years worth of sassiness and I came away feeling that I had witnessed something special. A ‘happening’ as I believe the jazzers might say.

Indeed I was so pumped after her gig that, instead of heading back to my camper to mainline some Horlicks, I decided to spend some moments in the big-top dance tent. I’m not sure when it came to an end, I didn’t stay all that long in truth, but I can report it was absolutely heaving with sweat-wild individuals of all ages and denominations when I left.

Perhaps the greatest pleasure of Love Supreme though is just wandering around the stunning site and chancing upon all sorts of engaging acts and activities in the numerous venues (I counted upwards of seven stages including the smaller ones). For example, after cunningly avoiding a packed salsa class early on Sunday morning I chanced upon a political debate in the Rough Trade tent which, while a little intense for the time of day, nonetheless warmed up my radical blood. There was even a rather muted call for revolution, albeit from the look of the attendees it’d be one step up from a Velvet one; a Laura Ashley revolution anyone?

Other unexpected pleasures of the weekend included a poetry and rap session in the Jazz Lounge on the Friday evening, followed by some wonderful jazz singing by Lady Blackbird in the South Downs tent, topped off by the quite fabulous Ezra Collective who got the crowd jigging around like crazy things. I’d hardly heard of any of the performers at this year’s festival beforehand, but the joy of discovering these new-to-me talents is an essential part of Love Supreme’s appeal.

A few prosaic details: the camping areas are good if sometimes a little crowded (what’s new at a festival?); the loos are generally clean but, presumably due to the sell out crowd, there were queues for them all weekend, especially for the women; likewise the showers; the choice of food was really good (if, as ever, a little overpriced); and the bars are well situated and the beer was good (albeit a little overpriced too).

The biggest blessing of all was the weather, which was beautifully sunny all weekend. This is often the way with Love Supreme as it’s held in the heart of the summer. Next year I must remember to bring some sun cream…