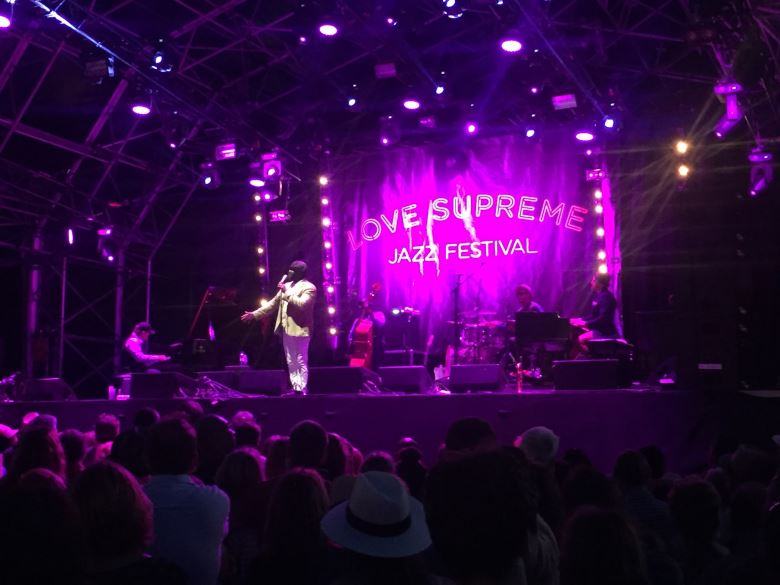 Is it possible to enjoy a jazz festival without liking jazz?

Is it possible to enjoy a jazz festival without liking jazz? Indeed it is, and believe me I know – I’m just back from Love Supreme and it was a hoot…and a bebop, a modulation and a trombone-full of scatting. It must be said though that whoever is in charge of booking the acts has, shall we say, a somewhat loose view of what jazz is. Since when, for example, does an Indian Ska band(!) count as a jazz ensemble? Since now it seems and I, for one, am not complaining. Ska Vengers, whose high energy set stormed the Arena tent late on Friday night, were one of my highlights of the weekend.

There were though enough hardcore jazz acts to justify the festival’s billing...and more than enough to cause a non-jazz fan like me some aural distress. Except that they didn’t. The dangerous and mellifluous spirit of jazz spent the weekend gently seducing me, until I finally succumbed, falling into the arms of mesmerising nineteen-year-old-star-in-the-making guitarist Mansur Brown of Triforce, who played an astonishing late night set in the pocket-handkerchief Jazz Lounge.

At five years old this mid-sized festival has come of age, and on the admittedly slight evidence of my two visits to date it’s improving year on year. It has, more or less, got it ‘right’ – a very good selection of new and old acts, perhaps the friendliest crowd I've met at a festival of this size, a good mix of ages (predominantly middle aged granted, but there were plenty of teens and twenty somethings gamboling around in the dance tent and many young kids about the site too), three major stages (and two or three smaller ones), a handful of colourful fairground attractions, the usual food and clothes shacks, a crèche for younger kids, a hidden away healing area, good access for the disabled and, well, that's about it. Oh yes, the camping was okay too, a bit intimate perhaps but okay, and the portaloos were acceptably clean, if not a delight. I’d have most definitely liked a few more showers though, the morning queues were too long to bother for one smelly festivalgoer.

Love Supreme is not the wild frontier, it’s not the place to get off your face on acid and share visions of anarchy and a better world, but there were plenty of jazz-cigarettes to be smelled, a healthy quorum of wacky festival outfits and glitter to be seen, and an agreeably broad enough selection of drinks to sample in the inevitably over queued-up bars. The weather was good too – it seems even God is onside.

The line up this year delivered a variety of major stars (it usually seems to), some well beyond their best for sure, but all crowd pullers in their own right. George Benson and Herbie Hancock aren't my thing at all, albeit they did it for the majority, but Gregory Porter totally surprised me, such a warmhearted man...I almost swooned - I don't think I have ever seen more middle-aged couples romantically embracing in my entire life than I saw during his set (do people of that age still kiss? Have sex? Yuk-a-duck).

Of particular note in my world were the Colombian band La Mambanegra (it was impossible not to dance – an inspired choice for Sunday openers) and the utterly soultastic St Paul and the Broken Bones whose set was just brilliant, with St Paul writhing about on the floor amongst the wires while belting it out plaintively like an albino Otis Reading (it’s so much better he’s spending his time doing this these days rather than writing all those letters). The Jacksons weren't half bad too; something of a tribute act for themselves, they were still managing to do a bit of polished rockin' robin in-between over-frequent breaks flogging their latest book and deifying Michael. There weren’t though only these older and more established acts in attendance, there were also a fair few newer and, to me at least, undiscovered artists knocking about on the smaller stages, many of them very excellent.

It's no surprise then that Love Supreme was a total sell out for the first time this year. Even so the festival site – a sumptuous green-grass heaven nestled between the plump thighs of the Rubenesque South Downs – never once felt overcrowded, just pleasantly full. I'm surprised to say this as I didn't so much enjoy my first visit to this festival (as mentioned, this was my second), but while Love Supreme is not radical in the least, not a place for wild abandon or extreme hedonism, it is very much a warm beating musical heart of a festival weekend. I’m already planning my return next year.