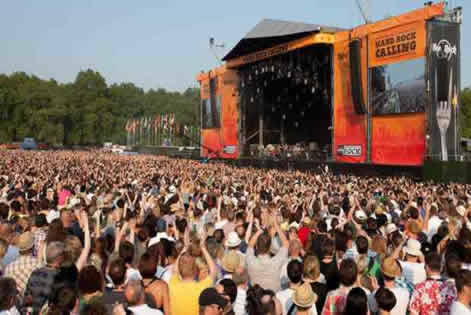 After a massive Glastonbury 2011 ticket-obtaining fail, I was partially consoled by the prospect of attending Hard Rock Calling in London’s very own Hyde Park. It’s like a festival, yeah, but you can go home and have a shower afterwards, not just daub yourself with wet wipes. Result. Having missed out on tickets for Saturday headliners Bon Jovi, I was still very much looking forward to catching Kaiser Chiefs and The Killers on Friday, and even more excited about Stevie Nicks and Rod Stewart on Sunday (this is betraying my age).

Arriving on Friday in a rainy fug, it was clear that Hyde Park-goers could expect to share Glastonbury’s damp and muddy weather conditions. Uh oh. Things had taken a turn for the worse; we had forgotten our waterproofs.

Cheered marginally by the gratis cider (thank you, Press Area), it was with bedraggled trepidation that we trudged towards the main stage in a bid to be rejuvenated by cheeky anthemists Kaiser Chiefs. This better be good, I thought, as I wiped precipitation mixed with eye makeup from my face. It turned out I needn’t have worried.

Ricky Wilson & Co, sensing the crowd wanted a pick-me-up, took us all back to those Indie halcyon days of 2005 with their sing along belter Every Day I Love You Less And Less. Energetic on stage as ever, the Kaisers brought a much-needed smile to the drenched audience with their madcap capers.

Following this classic with a song from their new album, The Future is Medieval, could have been a risky move but luckily Little Shocks is a great tune. With its eerie ‘80s keyboard riffs, it sounds like the product of a more sinister and rockier Human League.

The highlights of the Kaiser Chiefs set were, perhaps predictably, the ones that we all know and love. Ruby, Never Miss A Beat, I Predict A Riot and the well -judged finale Oh My God brought the house down and got everybody shouting out the lyrics with gusto.

After a brief cider and bog break, it was with renewed vigour that we returned to the main stage for The Killers. Front man Brandon Flowers summed up the whole ethos of the night with well-known opener Glamourous Indie Rock & Roll, although I confess to feeling less than glamourous myself, standing there shivering in my wet Converse. Flowers was clearly marveling at the British audacity of withstanding treacherous weather conditions in the name of Rock. ‘What are you doing here? Didn’t you get tickets for Wimbledon?’ He quipped.

The Killers kept spirits high with a very hit-heavy set that included Somebody Told Me, Smile Like You Mean It, Losing Touch, Human, A Dustland Fairytale and Mr Brightside, accompanied intermittently by fireworks coming out of the sides of the stage. There was even a shower of confetti into the audience during an up-tempo All These Things That I’ve Done.

No fan could have been disappointed with such a comprehensive showcase of the band’s talents, which was supplemented by a surprise rendition of Moon River from Breakfast at Tiffany’s.

The generous encore sealed the deal, with Jenny Was A Friend Of Mine and When You Were Young rounding off a high-octane set that managed to go un-dampened by the horizontal rain.

Arriving at Hyde Park on Sunday it was SPF20 not waterproofs we needed. Phew! What a Scorcher! as the red-tops would have it.

Chilling in the press area with a pear cider while listening to Barenaked Ladies and Mike & The Mechanics on the Pepsi Max stage proved just the ticket for steeling myself for the main event, namely: Stevie Nicks followed by Rod ‘The God’ Stewart on the main stage.

As a huge Fleetwood Mac fan, I was delighted to hear Stevie in fine voice singing Rhiannon and Dreams. She also looked amazing, her lustrous golden hair shining in the unusual sunlight.

As Stevie’s set drew to a close with the melodic Landslide I looked around and saw that, despite some unfortunate cases of sunburn, the crowd was on top form and eagerly anticipating the arrival of ‘The Tartan Crooner’, as my friend Bob calls him.

Rod opened his two hour set with soul stormer Love Train from the O’Jays and Sam Cooke’s Havin’ A Party, songs which were as glitzy as the first of his many luxurious jackets that evening.

Rich vocals on The First Cut Is the Deepest proved that Rod has definitely still got it. This being one of my absolute favourite songs, I don’t mind telling you, I was fit to swoon.

Next, Rod upped the tempo with Baby Jane, a number that couldn’t fail to get everyone singing along. The first guest appearance of the evening saw Stevie Nicks returning to the stage for a duet on Young Turks. The performance was a perfect encore for Nicks and allowed Stewart to show off his trademark suavity with the ladies.

But the real splendour came when Rod introduced to the stage ‘me old mucker’ Ronnie Wood amid jokes about the pair’s advancing years; ‘Bruce Forsythe is up next!’ Rod teased.

Ronnie thrilled fans with his collaboration on Maggie May and Faces stonker Stay With Me. The meeting of these titans of Rock was truly a momentous occasion. Older they may be, but Wood and Stewart still look and sound amazing, and bring a whole new meaning to growing old disgracefully.

Hot Legs and Do Ya Think I’m Sexy? seemed the natural conclusion to this phenomenal set, we would have been happy with that. But Rod, pulling out all the stops, sent us off into the night with a dulcet rendition of Sailing.

Elated and star-struck, I left Hyde Park on Sunday thanking god that I hadn’t got tickets for Glastonbury.

Published on 28 June 2011 by Nathalie Tidman