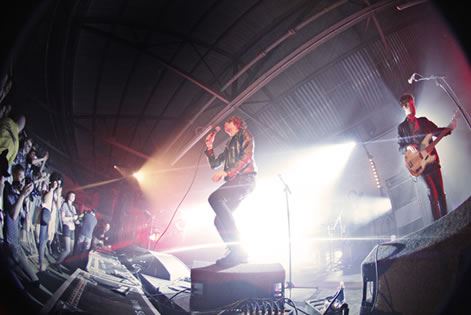 Liverpool Sound City 2014 boasted 350+ diverse bands playing at 25 venues across the city over a 3 day period, attended by thousands of music fans and delegates from around the world.

Prior to the vast array of musical activity in the evenings, there was chance for delegate pass holders to attend the daytime conference at Liverpool’s waterfront Hilton hotel. It featured talks and panels with industry experts, with this year’s focus being on the key themes of football and music – the two things for which the city is most famously known. Liverpool is a city that is buzzing at the moment, it feels like a special place to be, and at the heart of that is both its football and music. Its two football teams have played attractive, attacking football with style and swagger all season long, whilst its music scene is blossoming with great events and bands.

It is one of these bands - The Hummingbirds, a well-dressed Liverpudlian 5 piece, who kick off the festival’s first night with a packed out gig in the small independent Bold Street Coffee shop. The gig is a lock out, with crowds standing outside listening in. They played a short set, finishing on their fitting and popular ‘Back in Liverpool’ track. From the smallest venue used in the festival to the largest - the grand stage of Liverpool Cathedral - a massive, impressive and visually stunning venue, where recent chart toppers Clean Bandit brought their pop music to the party. They’ve had a rapid rise in the early part of 2014, due to their track ‘Rather Be’, and it is this track they ended their set with to send the thousands in attendance away happy.

Across town at Nation (home to iconic Liverpool clubbing brand Cream) Jon Hopkins laid down a live set of beautiful, thumping techno complete with impressive visuals and melodies. Hopkins’ track ‘We Disappear’ featuring Lulu James was Zane Lowe’s Hottest Record on BBC Radio 1 this past week, and his live set tonight left the crowd in awe, confirming his rise is very much in the ascendency.

Night two of Liverpool Sound City kicked off with some al fresco gigs at the Moon Museum and Kazimier Gardens. The Moon Museum, an outside pop up venue played host to local bands Sugermen and Broken Men – who played some catchy and upbeat tracks. Across the road at a very busy Kazimier Gardens were Hooton Tennis Club, who ended on the lovely ‘Kathleen Sat On The Arm Of Her Favourite Chair’. Next up were Academy Strangers at The Attic. This young Scottish band have been rocking venues across Scotland, and they didn’t disappoint here South of the border either! Next door to The Attic in the non-alcoholic Brink was Maya Avgar, providing beautiful laid back vocals perfect for the venue. Over at Liverpool Cathedral Albert Hammond Junior ended on The Buzzcocks ‘Ever Fallen In Love With Someone’, whilst big queues formed at East Village Arts Club for Wolf Alice. Inside was even busier, and the sweaty, hot Theatre room crowd loved every minute.

Drenge then provided a set of loud, noisy tracks at The Kazimier to send the venue into a wild mosh pit! This young drummer and lead singer/guitarist duo have a big career ahead if this gig is anything to go by. Next door at Nation Fuck Buttons played a live set of progressive, psychedelic techno sounds whilst controlling various keyboards and synthesizers. This was a lovely set full of melodies and great colourful visuals on screen behind the pair. It was an electronic music fan's aural heaven.

One of the major advantages of Liverpool Sound City is that its venues and pop up stages are in the same vicinity and within quick walking distance from each other. With the very welcome addition of the free Liverpool Sound City mobile App it also made planning your gig itinerary much easier. Most of the activity is centered around Wolstenholme Square, which was given an impressive transformation from previous years. Venues here included the previously mentioned Kazimier and Nation, as well as the specially erected Duke Street Garage - a car park during the day! It is here that The Hold Steady took to the stage. Hold steady they did not. This American rock band played large rock n roll songs. Craig Finn, the lead singer, gave a charismatic and energetic frontman performance.

The third and final night of Liverpool Sound City started with Death At Sea at Factory, and Kodaline at Liverpool Cathedral. Both were impressive performances. Over at Korova – a nice, small intimate space famous for being the venue of the cover shoot of the iconic Arctic Monkeys album ‘Whatever People Say I Am That's What I'm Not’ were Mirror Signal, Highfields and The Hummingbirds. Highfields’ gig here was one of the highlights of the festival. They’re a young Liverpool based group from various places around the world – Canada, Norway, Jersey, South Africa and Singapore, bringing all of their different cultures and musical influences together to rock the party. They played an upbeat and energetic set, the crowd were bouncing – definitely the surprise package of the festival! The Hummingbirds then played their 3rd set of the weekend and 2nd set of the day, after playing on the delegate only Mersey Ferry boat party earlier in the day. Their track ‘Talking Of Tomorrow’ went down a storm.

Festival headliners The Kooks then headlined at the full to capacity Duke Street Garage. Many punters (including myself) were forced to watch/listen to the majority of the gig from outside the venue in the massive queue. It was evident that this year’s Liverpool Sound City was busier than previous years, and as the festival’s popularity continues to rise in future years, maybe the organisers will have to find larger capacity venues to stage the headline acts, as not to upset some of the ticket buying public who missed out. Once inside the venue however, I heard The Kooks provide this year’s Sound City ‘sing-along moment’ by ending on their endless anthem ‘Naïve’. Earlier, they had played a mixture of their classic older tracks mixed in with new material from their new album, such as the ‘Around Town’, ‘Down’, ‘It Was London’ and ‘Westside’.

The gig to close the festival was Mixhell at a packed Kazimier. Comprising of two members – Iggor and Laima, Mixhell are a DJ project with an innovative live element. Laima used samplers, CDJs, synths and drum machines whilst Iggor’s accompanying live drum set on top provided the most energetic performance of the weekend. It was a set of driving techno at its finest, with some dance classics thrown in such as Josh Wink’s ‘Higher State Of Consciousness’, Chemical Brothers’ ‘Burst Generator’ and Switch’s ‘A Bit Patchy’. It was a proper rave up, and the clubbers in attendance went mental to what was easily one of the best live electronic shows I’ve ever seen.

David Pichilingi, Liverpool Sound City CEO said, “Liverpool feels like the most fantastic place to be right now. This year Sound City received no less than 9,000 applications from bands around the world wanting to play our humble festival, from over twenty countries worldwide. This shows how serious we are now taken on a world stage - for both music and business.” David is right, and Liverpool Sound City 2014 was a thoroughly enjoyable, frantic and hectic few days. It’s a unique festival, organised by locals providing great music, artists, crowds, atmosphere and venues. Without doubt Liverpool is one of the world’s most exciting musical hotbeds and Liverpool Sound City is an important yearly fixture of that. Here’s hoping the festival will return even bigger and better in 2015.