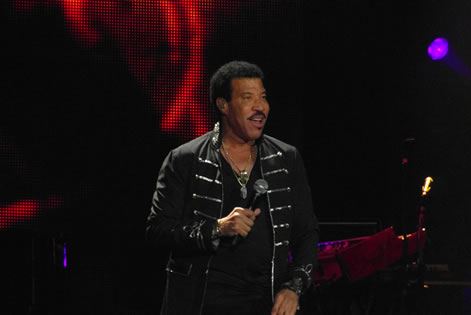 Whether happily single, or taken and in a relationship, there was a lot of love in the air at London’s O2 Arena on a particular Tuesday night. This was all due to Lionel Richie, the living singer-songwriter legend that can bring the sense of romance to anywhere, taking his ‘All The Hits All Night Long Tour’ to the Greenwich venue.

It is incredibly difficult to believe that Mr Richie is indeed 65 years old with such a youthful appearance, and also judging by the way he smoothly manoeuvres around the vibrant stage set, of which could be mistaken for the inside of a funky nightclub.

Filling 150 minutes with 24 tracks could seem draining, but Lionel superbly does it like a pro. All dressed up in a bling jacket that is matched with a variety of gleaming necklaces, he begins the show with ‘All Around The World’, which is the perfect choice having transported this specific tour to many other countries too.

Along with songs from the early days as a singer in ‘The Commodores’, it is made definite that later-released fan favourites are not missed either, when he settles at his piano for a deep performance of ‘Hello’.

Witty comments by the musical expert consisted of “We have been together for a very long time, but whilst you have aged, I have stayed young” – in reference to the audience. Plus “This is the 25th year Diana Ross has rejected my invite to duet on ‘Endless Love’, are only a couple of jokes to name.

Extremely well known classics ‘Dancing On The Ceiling’, ‘Three Times A Lady’ ‘Say You Say Me’, ‘Easy’ and ‘All Night Long (All Night)’ have the crowd singing word-for-word. However, when Lionel returns to the stage for the finale in a dapper white blazer the big surprise is the inclusion of the U.S.A. for Africa cover “We Are The World” and, a tribute to his fellow chart-topper, Michael Jackson.

Members of his band showed breathtaking skillfulness from start to finish and Lionel continued to praise their talents throughout the evening. The people working backstage were also invited on stage at the end for a deserving round of applause.

Devotees of the American male artist were certainly pleased as could be with how they spent their hours of darkness, and to learn that not only does Lionel Richie match his sensational record voice when playing live, but also because he really is a genuinely nice man too.

Published on 01 April 2015 by TasminAnderson