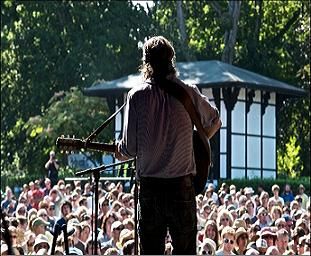 Celebrating its 20th anniversary this year, Larmer Tree Festival has grown to provide some of the best, most interesting and diverse entertainment on the festival circuit.
Kick starting it off on the Wednesday night the headliner is none other than that of a legend, founder-member of Squeeze Jools Holland  is appearing for another unforgettable night of boogie woogie with his Rhythm & Blues Orchestra.

With it's beautiful location in the Larmer Tree Gardens the site plays host to a famously family orientated, friendly and ethical festival that combines diverse music and spectacular street theatre with comedy, therapies, stalls, food, carnival and talks with something for all ages.  The magical Lostwood area hosts poetry, storytelling and spoken word, and in addition the festival boasts over 150 free workshops, shows and activities, proving that it is so much more than just a music event.

Established in 1990 the Larmer Tree has managed to hang on to its independent and non-corporate ethos, and with 6 stages and over 80 artist's this sell out festival is non like any other and needs to be scene to be appreciated.


“Bringing together their unique blend of music, street theatre, art and workshops – the team behind the event made sure that despite the bad weather, the festival was a great success.”  - Listed Magazine
“The line-up of artists, performing on six stages is so eclectic as to defy categorisation. One minute, you might be listening to drummers from Mali, the next an acoustic punk combo from Mexico. The facilities are excellent – clean toilets, drinking water, showers – and there is a Secret Garden, where you can kick back and get a Thai massage or a reflexology treatment.” - The Sunday Times
“The Larmer Tree event is one of the best kept secrets of the British world music scene, set in a green idyll on the Wiltshire-Dorset border that – were it not for the odd Eastern temple and Nepalese pagoda – could be straight out of Victorian England. There are even iridescent peacocks, which sit watching laid-back crowds laying back on well-tended lawns.” - Songlines
“The most beautiful festival venue in the UK… if you only go to one this year, it has to be the Larmer Tree!” - Whole Wide World Records
“There is an infectious feel to the place. Larmer Tree, which stops selling tickets once its 4,000 limit has been met, is on a manageable scale. Our children could make forays on their own and easily find us again.”  - The Times
“The Larmer Tree is magical. There’s something about the trees – you can see them growing… the music gets their boogie muscles twitching.” - Jools Holland

Published on 06 February 2010 by Wayne Feltham