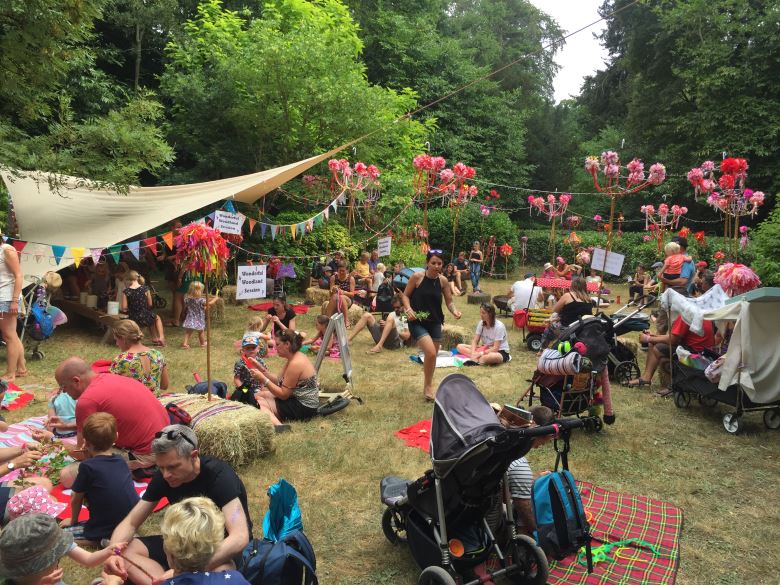 Leonard Cohen confidently assured us way back that 'there is a crack, a crack in everything'. He clearly hadn't been to the Larmer Tree Festival. There was not a single crack to be had, and believe me I was searching for one (apologies Carry On franchise). This is the most organised, tightest run festival I've ever been too...perhaps, dare I say it, just a little too well organised. It sounds churlish I know, but there's virtually nothing of the hairy, smelly, free love, acid trip wonderful weirdness of festivals past on show

For me Larmer Tree is a perfect festival for people who don't really like the discomfort of festivals. If that sounds pergorative it's not meant to be, people were loving it, it's just that this seems to be a festival for the more radical end of middle England, for those who feel wild is putting on a well ironed tie-dye T shirt and wacky hat and drinking prosecco chilled in an ice bucket outside their designer tent. I was jealous obviously - why didn't I think of that? Bastards the lot of them.

There's a bit of a happy camper meets country fair vibe going on, with a stall selling weekend newspapers at the entrance, a craft tent (they called it the artists quarter), a really good range of food stalls (fancy a pheasant Jalfreizi anyone?), exceptional shopping opportunities (too many for my unreconstructed male taste), and endless activities for kids all over the place. In fact this festival excels at the latter, it's a truly fantastic place to bring your youngsters and gaily abandon them for a few days. I've never been to a festival that's set up better for this. Unsurprisingly there were lots and lots of young families in evidence.

The festival is sited in an attractive enough Victorian garden with three main open areas, six or so stages of various modest sizes, and a little bit of pleasant woodland. Oddly they really don't make the most of the open space with a lovely view over the big-sky Wiltshire countryside, which is - inexplicably to me at least - used mainly as a carpark. It's a strangely cramped site all said and done, just about big enough to contain the large weekend crowd but not to allow anywhere larger than a postage stamp for ad hoc lounging about on the grass half pissed doing nothing much (my sometime speciality at festivals). And hush now, don't make too much noise...for a music festival it was often remarkably quiet, with little in the way of general background cacophony going on.

I suspect this highly civilised feel appealed a great deal to some of the 70 year old plus members of the crowd, of which there were a good number (which is a good thing, well done festival...disabled people were also well catered for), and a fair few of the country-wealthy-weekend-alternative types who looked like they were simply itching to put on a pair of Hunter wellies. It was far too hot for rubberware though (my latex nightware stayed in my bag), southern Spain hot in fact, a sombrero stall would have made a killing, as the beer tent(s) indeed did, selling an admirably wide range of excellent beers and ciders. Hic.

Don't come to Larmer Tree though looking for anything more potent than alcohol, one whiff of dope was the final score, and I saw no one frothing at the mouth with kaleisdoscope eyes throughout the whole weekend...excepting perhaps a couple of old boys in the Arc tent who'd overdone the sun. This tent, bizarrely, was completely seated, making it very hard to dance or fill it beyond the seat capacity. This was particularly irksome when, after a fabulous set by First Aid Kit on the pocket-handkerchief main stage (the festival did really well with female acts), we all rushed to see Sara Pascoe being hilarious in the Arc...or rather I didn't, as the nearest I could get was a crowded walkthrough outside the tent, more or less out of earshot and certainly out of eyeshot. I'm sure Sara was excellent, darn and blast, if only I'd put a towel down on a seat earlier on.

What with all the excitment and all, I would have loved to have taken time out to relax in a hot tub and sauna in the shade filled woods, but these delights were for me rather overpriced at £30 for a couple of hours, so I made do with...well without. The nearby healing area was pretty good, notable in fact, set in a pretty corner of the woods with quite a few excellent options on show, but again the prices were a bit high for me, although in this case normal enough for a festival. I guess I just need to earn more, or get over myself.

Fortunately it was very easy to locate alternative attactions to the above as the festival what's on booklet was both a work of art and very practical, never have I seen one so well produced, and while I could gripe at some of the somewhat askew formating for the activity section, I won't bother. It was a excellent piece of work, informative and attractive, and I found it easy to follow.

Of course I have to mention the toilets...not because of the tourettes, but because it's an obligatory part of any festival review. They were good, clean, and the showers were warm and feisty. There weren't nearly enough showers mind you, but there never are. I guess it's a cost thing? My British politeness gene lapses a bit after an hour of queueing. It was also a design fault to put most of the toilets inside the site and then not open it until 9am. I'm not sure why there was this 9am thing, I suppose it's set aside for setting stalls up and all, but I'd suggest bining it. On a positive timings note the festival offers some late night action, not least a silent disco in the woods into the early hours, an excellent option which I missed as I was hacked off at missing Sara Pascoe and wasn't in the mood.

So Larmer Tree is a very friendly, very safe festival with a good deal to offer, with some excellent - if for me rather undemanding - bands and loads of activities for families as well as plenty of interesting things to do for all ages and tastes (I enjoyed, for example, listening to a discussion with three local authors). If you are wanting a festival that gives you most of the normal festival action with a fair bit of the comfort of home thrown in then Larmer Tree is for you. And most definitely bring your kids, they'll have the time of their young lives running amok around the site, but don't forget to pick them up again when you leave...