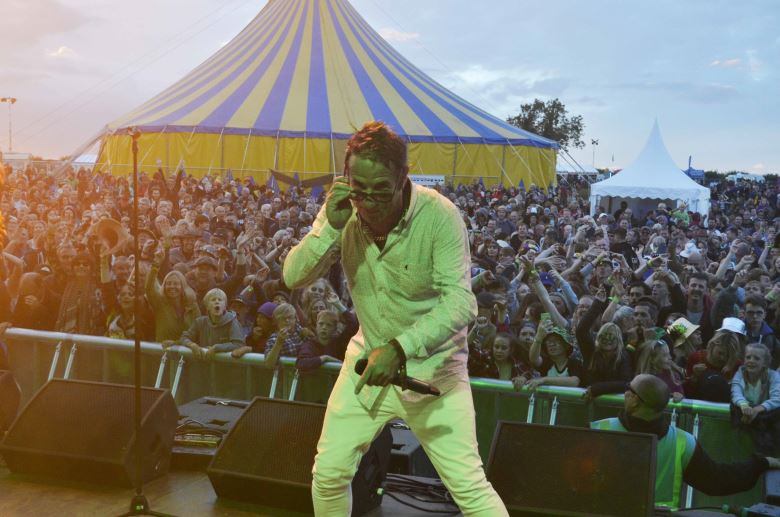 If you fancy a 5day stint in dreamy old England, where memories of over- crowding, traffic chaos, and dreary news reports seem a mere thing of another worlds future, and only the music gives you an idea of when you are, then look no further than Larmer tree festival.

Set in the pristinely manicured Victorian paradise of Larmer tree gardens, bustling with floral dresses, Pimms and BBC English, this is the quintessential festival for those who can afford it.

Renowned for its majestic opening night headline act, this year’s Wednesday night showstopper, was Grammy, Golden globe & multi Brit award winning Jamie Cullum, the most successful UK jazz artist ever, who set the pace brilliantly for the week ahead with his own unique blend of jazz, pop and signwriting mastery, that just made everyone go, ahhhh….and relax.

With four main venues, all bursting at the seams with everything from music, poetry, top class comedians, talks & lectures to yoga, & creative workshops, the art of getting the most from what’s on offer at this festival was in the planning. The festival guide was brilliantly well laid out, and made it easy to put together an itinerary, but it would be nothing short of crazy to think you could see much more than a small percentage of what’s on offer, especially when there was so much relaxing to do.

At £235 for a 5 day ticket, this is obviously not the cheapest festival on the circuit, and you can add to that, £400 for a pre-pitched wig wam, or £515 for a luxury caravan if you fancy letting go of the purse strings completely, but what you get for your money is a week of 5 star everything, attention to detail that is almost beyond compare at a festival, super clean and plentiful toilets, hot showers, full range of eateries and even Larmer tree wine, not to mention stunning scenery, Topiary bushes, water gardens and resident peacocks.

The Friday night headliners were the Stranglers, with their roots in the punk & new wave scene of the late 70s, later branching out into baroque rock & edgy pop and by the late 80s amassing 23 top 40 singles, this was probably the busiest night of the week, and the only time I saw the normally, pleasantly calm main stage bar anything like stretched.

It was almost implausible that the same PA system that had made Jamie Cullum and Caro Emerald sound so perfectly clear on the previous two nights, was now dealing with the abusive, distorted bass guitar of JJ Burnell which forms the backbone of the Stranglers, his sound almost tangible dragging itself like a 10-ton bag of horse shoes across a wooden floor, snaking menacingly through the audience, to tunes like Peaches, No more hero`s, and something better change. It was a truly awesome sound, I didn’t get a close up look at the sound desk, but I’m assuming it was probably Bang & Olufsen!

The trade stalls, a favourite of many a festival goer, were also plentiful, many of them selling vintage clobber, all adding to the lost in time feel of the festival, some of them also offering have a go workshops, I even did a bit of glass blowing at the Fox glass stall, and went home with a shonky shot pot …and certificate of authenticity!

Punk poet and self-proclaimed motor mouth, the Bard of Salford, DR John Cooper Clarke was one definitely not to miss, packing them in at the Arc tent with his quick fire poetry, gags and stories from the North captivating young and old alike.

Those of you with more transcendental expectations of a festival can rest easy, as all this talk of gentile, vintage England, doesn’t come at the expense of a nice gong bath, or chakra re-alignment, for hidden in the woods, are a whole manor of otherworldly goings on, a virtual one stop for all your spiritual requirements, including group meditation, tips on holistic parenting, Mindfulness, and of course Kundalini dance sessions.

The woods also played host to activities as diverse as story-telling, knitting, tightrope walking, writing and poetry classes, a master class in fairy drawing, an audience with Kate Adie, as well as the marginally more esoteric practice of pregnancy yoga.

Of course, at the heart of this festival is music, with a great clutch of established names, such as Jack Savoretti, Afro Celt Sound System, Caro Emerald, Calexico, and Sunday night headliner Tom Odell, plus some awe inspiring emerging talent like BBC 6 Music playlisters this is the kit & Sound of the Sirens.

A few others I caught that impressed me were, the country blues, gui-tar slidin` and a pickin`, Rev Peyton`s Big Damn Band, The Easy Star All-Stars, dubbin up classic albums like Dark Side Of The Moon, and Ok Computer, singer/songwriter Will Varley, and a young psychedelic pop/rock band called Coosbay.

Also resident at the festival, at a secret and un marked location in the woods, behind a gate manned by security 24/7, was the hallowed Songs from The Shed, with entry only granted to those lucky enough to find tickets around the festival site, and the performers themselves. The shed normally resides in Somerset, and is the place where curator Jon Earl records bands, many of them household names, and beams live around the world. There are some incredible moments available to watch at www.songsfromtheshed.com  including Alabama 3, K T Tunstall, Fairport Convention. I was allowed in only after undergoing many checks, tests and forfeits, to see Lori Campbell perform, it was a rare treat, a privilege, and definitely a weekend highlight.

Larmer tree organisers couldn’t really have wished for better weather, the sun and dry ground always makes a festival easier and more enjoyable, but this would have been a cracking weekend, whatever the weather. It’s easy to see why Larmer tree won the N.O.E.A small festival of the year 2015, and it’s pretty obvious that this festival is the result of many years of fine tuning and thought about how to make a festival better, not bigger.