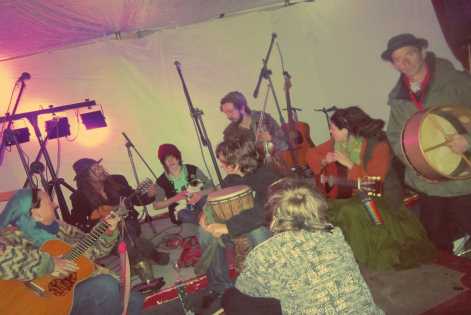 Armed with cheese and hot sauce sandwiches, chocolate mini eggs and Shiraz, the drive down to Tewksbury was all without incident, except that is, for the joint sigh, just south of Birmingham, when the heavens opened and a glance across the horizon confirmed in dense greyness that this could get muddy.

We set up station with ease, as camp was just a two minute stroll from the car-park, a far cry from the horrors of the ‘Glastonbury Mile’.

Off to explore we were met by a huge marquee, a terrifying looking fairground ride and a twee row of little stalls, peddling the usual festival wears, albeit at very reasonable prices: I almost purchased a rather scary looking silver skull ring based purely on the £1 price tag, before the smell of hot samosas next door, thankfully, diverted my attentions.

Gnawing on soggy pastries we ambled across the path to the lake side field, discovering en route that there were water sports and canoe hire and other cold and wet sounding activities that we would not be participating in. It was in this small enclosure that things began to get interesting.

All the stalls, stages and tents had arrived via the traditional horse and vardo, which were a dainty prop in themselves. We sat for a while and listened to a 3 piece on the Sanger’s Stage, which, in its untouched-up rawness, was both haunting and mesmerising. When the trio took a break we fell in to a deep discussion with the chap of Wooden Books, Ian, a man with a ruddy nose and a wispy ginger beard, we spoke about hemlock and sacred geometry and witchcraft. He liked us and we liked him and so when two of his fellow traveller chums joined in on our red-wine fuelled debate, the five of us became inseparable for the night. I like to think the five of us tromping around the place appeared a rather unlikely looking and shoddy entourage.  After, we retired back to their musical hub and we sat up until the early hours, captivated by their enchanting folksong and tales and legend.

EMF, the county’s biggest stars wowed the crowd, preforming their 1991 hit album Schubert Dip. That went down very well.  There was also Reef, 3 Daft Monkeys and Toploader which drew great applause. But my Lakefest heroes were the unknowns: nothing tweaked, nothing censored. An alluring tribe, that we know so little about…