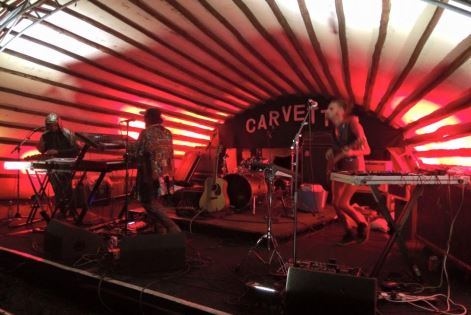 ‘See you in the fields!’ they called, and to the fields we came. Now this is no ordinary festival field, set in the beautiful Cumbrian countryside in the heart of Lowther Dear Park, Kendal Calling is a fast growing independent festival which in the space of 10 years has moved from a big two day party, won best small festival in 2011 and best medium sized festival in 2013. So here we are to celebrate its 10th year with what is billed as the biggest line up yet full of anticipation and expectation of what party delights they have in store for us.

With an extra day being added we arrive Thursday night to see Kendal favorites James who are opening headliners, when we arrive the festival is already in full swing. This year we upgraded to the Emperors field camping giving us a site nearer to the main arena, showers (still rather grim but an option if you can’t bear a weekend without), but the main appeal was being able to park right next to the camping area- bliss! This is probably not the field for you if you’re planning staying up all night having campsite parties- get yourself to Wolf Woods for that. However if you don’t want a 20 minute walk with all your kit in the rain and mud this is definitely for you!

Now everybody knows about the main stage at the festival- it’s the place to be right? Well actually, Kendal is so much more than just the main stage.

The glow dance tent/giant circus big top tent is ready for some serious raving and massive sounds system action with a DJ line up to rival some of the big dance festivals with Grand Master flash showing how its done, Marabou state, Bondax and the mighty Groove Armada who brought the roof (of balloons) down to a rammed tent.

The Chai Whallah tent is an escape from the main hoypoloy but bringing the sounds with everything from Mr Scruff to the Broken Brass Ensemble and offering everything from a bouncing party to some lush chill out spots and delicious ‘pick me up’ treats at the bar.

The Riot Jazz tent brings you circus meets eclectic with some of the most creative acts and original music. If you fancy hoola hooping, dressed as a pirate to acts such as the Thingumagigs, Buffalo brothers and Gypsies of Bohemia this is the tent for you.

The Calling out stage every year presents some of the best new bands and singers, many who have gone on to big things and even moved up to the mains stage such as the Augustines and The 1975. This year presented the likes of Bi Polar sunshine, Kate Tempest and Public Service Broadcasting ending each night with a full on indie disco until 3am.

We all know it’s easy to forget where you are after a few ciders and a bit of gentle mosh pit action but Kendal Calling have utilized ever bit of nature here. A short walk along a woodland path takes you to the woodland stage which feels quite mystical and like its own mini festival. Especially when you rock up mid afternoon on Sunday and can barley move through a massive crowd singing ”I want a chippy tea’ along to the Lancashire Hotpots, only to be pulled along in the middle of a giant crowd Conga. Or as you wander through the woodland into lost Eden to find a trail of creative and wacky arts which at night quite literally came alive with lights, fire, moving performers, giant robots, paper mache horses and a 10foot high ball with rave bate images projected onto it. Following the art parades and crazy signage led us to stumble upon a small stage where the wonderfully bonkers Age of Glass were playing and Aziz from the Stone Roses was being interviewed. All this Lost Eden art finally ending on Sunday by leading us to a secret rave in the woodlands-just superb!

Now the fun didn’t stop there, further through the Woodlands to celebrate its 10th Birthday, the former VIP Lakeland stage has been opened up, and what a party it was, party hats and crazy costumes galore, deckchairs and even a giant mud based danced off. Whist the sun sparkled down on the lake and the wellies stamped down in the mud to the bass and disco tunes blasted out by Horse Meat Disco, Browlin and DJ Yoda.

Tim Peaks was there as always with his wonderful dinner serving up a “proper brew’ and a selection of celebs on the decks from Tim Burgess himself, The Kaiser Chiefs and Clint Boon. Jagermeister was on tap at the Jagerhaus in the form of a massive wooden hut bar inclusive of beer garden, cosy seating, top floor VIP bar, stage and DJ booth. For the fruitier cider lover Bulmers brought some extra fun with a dance off stage and colour challenge- which mainly involved blasting you with powder paint, just to add to the mud that is already engrained in all of your clothes. It wasn’t just alcohol based fun either, Kendal is a great family festival with loads going on for the kids with the soap box comedy tent and cinema tent for the big kids too.

All in all Kendal had put on one hell of a festival, but why take my word for it- we accosted an Augustine and gave him his first true UK festival experience beyond the main stage, and after 5 hours of dancing, fair ground rides, riding in golf buggies and sampling pretty much all of the above in one go Billy told us “This is AWESOME”…. need I say more?!

So it just leaves me to say- get your wellies to Kendal, you’ll have a blast! Oh and if the headline acts and main stage are your main interest, fear not-Elbow, The Vaccines, Kaiser Chiefs, Super Fury Animals, Augustines and the notorious Snoop Dog absolutely smashed it on the main stage!