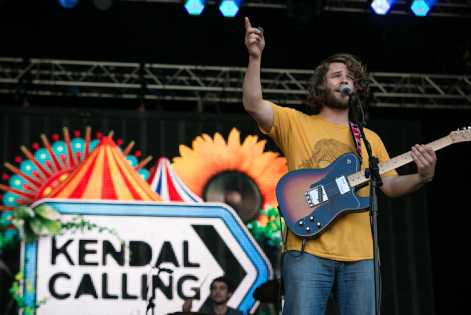 “I wish I knew what I was letting myself in for,” mumbled an extremely brooding looking female artist onstage while holding her guitar aloft. Huddled inside the Chai Wallah marquee sheltering from one of the many downpours that weekend, those around me seemed to be mulling over that very same question. Although, the city kids seemed far less concerned about the possibility of catching pneumonia, but more with stomping their feet in an almighty strop because “there is no Wi-Fi. Or Internet. This isn’t anything like London!” Well, considering that we’re not shy of being 200 miles north of the capital in a field in Cumbria, the lack of technology and similarity to a major city shouldn’t really have come as a major shock. But, I managed to look on the brightside; there may have been no Wi-Fi, but that meant I wasn’t going to be bombarded with nonsensical rubbish about the Olympic ping-pong or women’s weight lifting.

But it’s not just the lack of Internet access that throws you back at Kendal, it’s the acts, too. The giant mock tapestry that was draped around the perimeter of the stage charted the festivals rapid voyage and the acts to have already made appearances in previous years – a crudely drawn picture of the late Frank Sidebottom being my favourite. From old heavyweights to unsung heroes, cult figures and world famous acts, Kendal has had them all. It’s become a festival that has managed to find that perfect balance between nostalgia mixed with contemporary acts. Despite it only having a relatively short journey in comparison to other major festivals, the history it has already carved out for itself certainly rivals that of its older, yet not necessarily wiser, competitors.

One act that are steeped in history are Manchester legends, James. The enormous spindly-limbed frame of Tim Booth sauntered out on Sunday evening with a swagger and air of self-assurance that has become a hallmark of Mancunian acts. Though the scale of the gig was vast, the group were able to create a beautifully intimate atmosphere as they treated the crowd to stripped down versions of old favourites ‘Fred Astaire’, ‘Johnny Yen’ and ‘Out To Get You’. The ability the group have to effortlessly flitter between creating that level of intimacy and leaving an audience member feeling solitary within a crowd of thousands, to commanding everyone on mass with a wave of your hand is a skill that groups strive years for, with some never even coming anywhere close to attainting it. Having been educated as a musician under lead guitarist Larry Gott, I know of his deep loathing for unprofessionalism and his desire to create something special as apposed to going through the motions. It also must be a view shared by the rest of the group due to the sheer precision and tremendous musicianship their set was executed with. The band even had the gall to tease the crowd by leaving the stage for a short while without having played anthems ‘Sit Down’ or ‘Laid’. Although the group did return, Booth told the crowd that there were some nights they didn’t play “it”, but the Kendal crowd had “earned it” and were given a brief yet chaotic encore.

It wasn’t as heaving as I’d anticipated for the Friday evening headliners Maximo Park. Although, that may be down to the fact that in far flung corners of Kendal Calling, you can find some wonderful hidden gems if you’re willing to let your curiosity get the better of you. Tim Peaks diner, the brainchild of The Charlatans Tim Burgess, was a log cabin set beside the phenomenally picturesque lake that offered some rare acoustic performances from the likes of Scottish post-punk legend, Edwyn Collins who was joined by Burgess himself. Other corners of the festival attempt to inspire a more fairytale style of childlike awe within you, with hundreds of multicoloured enveloped “thank you” messages hanging from trees left by festival goers, to the giant gingerbread and candy houses scattered around the wooded areas – although, the only wolf I managed to see huffing and puffing was the one smoking Marlboro’s and drinking bitter in the real ale tent.

My favourite hideaway at the festival, which just so happened to be serving my beloved poison, was The Riot Jazz stage. On the Friday evening, it was the setting for a frenzied midnight set by a bunch of young upstarts who’ve been on a meteoric rise in the past couple of months. It’s been gradually snowballing for Dirty North since Reni of The Stone Roses gave the band a sparkling recommendation during the reunion press conference in October. They then managed to grab themselves one of the coveted supporting slots at the homecoming shows at Heaton Park and haven’t shown any signs of relenting since. The lads carry that same “streetwise, gang with guitars” attitude that worked for The Mondays and The Roses before them, taking influences from dub and reggae and fusing them together with gritty riffs and a do it yourself punk ethos. They are being tipped as ones to watch for the future, and with new releases on there way, I’m guessing it might not be too long before we have another main stage festival act on our hands.

Minus a touch of sunstroke and a few sleepless nights, the festival was a thoroughly enjoyable weekend and seemed to have really turned a corner in regards to establishing itself as a major player on the festival circuit. The family atmosphere at the festival keeps at bay the underlying unpleasantness and potential for trouble you can sometimes experience at other festivals as the evenings draw in. Its low-key format is clearly a crowd pleaser for the thousands that attend year after year. But, whether we see the commercialisation of something considered to be still at a pure and grass roots level in an attempt of turning it into a money making behemoth, remains to be seen.