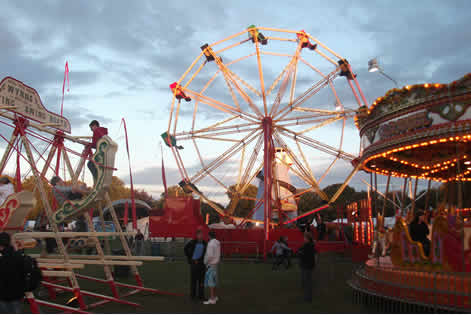 Jolly Day Out was set to be the family event of the year and it sure was, being held on the Hampton court grounds, spreading over four days of rides, fun and music- there was something for everyone.
Rides included the teacups and a Ferris wheel, there was also a petting zoo where children could get up close to many animals, various workshops so children could get their creative hats on to make mosaics and more, plus show’s which included horrible histories and various food and sweet stalls.
The main act of the day on Sunday the 28th of August was successful pop band McFly, who have had seven numbers one’s in the UK alone and were the youngest band to have an album go straight to number one- a title previously held by The Beatles.
Supporting McFly were Size 9 and band City Stereo- who had also performed with McFly whilst on tour with them back in March/April.
I had the chance to speak to the 5 piece who say their dream band to support would be either rock band the Foo Fighters or Paramore, their favourite venue to perform at whilst on tour with McFly was Wembley arena, though they did tell a humorous story where they had their photo taken outside Wembley stadium and told people they’d actually performed there!. When asked about whether they had an album out one of the member’s kindly went to collect an album for me- ‘Dance like you mean it’ was their 1st album- containing 11 tracks, they are now working on their 2nd album. The band was also making the most of Jolly Day out as two of the members had been on a couple of the rides and said it had been great fun. Later on in the evening they played a half an hour set warming up the crowd for McFly.
I spoke to McFly’s lead singer’s and guitarist’s Danny and Tom, bass player and singer Dougie and drummer Harry before they went on stage and they were a nice group of guys who truly have their feet still on the ground after eight years of being together and were happy to be at Jolly day out.
Scream’s were all around as they started their set with Party girl- taken from their most recent album ‘Above the noise’, other songs included Corrupted, Nowhere left to run, if you see Kate, Falling in love and number ones- Obviously, All about you and 5 colours in her hair.
Danny put down his guitar and put on his shades to cover Tinie Tempah’s hit ‘Pass out’ which proved not only can he sing but he can also rap.
McFly dedicated ‘The heart never lies’ to fans who had supported the band since the beginning- including myself, who has seen the band 22 times live and been to various signings etc, front man Tom changed the word’s from ‘It’s not always easy, but I’m here forever’ to ‘Its not always easy, but McFly’s here forever’ which everyone cheered and screamed too.
Finally they finished off with an encore, playing ‘One for the radio’ and every fan’s favourite ‘Shine a light’.
During the show McFly chatted and joked with each other and the audience, to many it felt that you had been friends with the band for years, Danny also threw McFly t shirts into the audience, plus plectrums and Harry’s drumsticks at the end- for fans who were lucky enough to catch one.
Dedicated fans had travelled from all around the country to see their favourite band in the flesh and to see their last show of the year- some fans had even come from Spain.
Throughout the show fans of all ages- including parents danced to McFly’s hits and it was positive everyone who attended had a brilliant time.
McFly were definitely a hit, Tom, Danny, Harry and Dougie proved how brilliant they sound live and made a lot of people of all ages very happy.

Published on 30 August 2011 by TasminAnderson