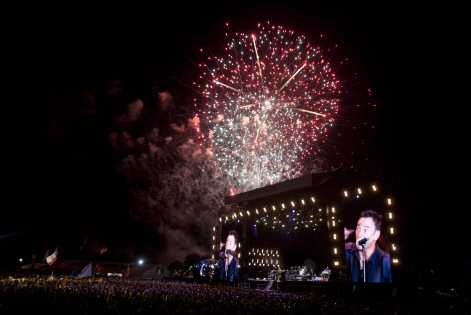 From The Sex Pistols, David Bowie and The Rolling Stones, the Isle of Wight festival has seen some of the world’s biggest artists perform during the span of its 14 year history, and the 2012 headline acts certainly did not disappoint. With a headline trio of some of the biggest names in rock music including Tom Petty and the Heartbreakers, Pearl Jam and Bruce Springsteen, this year’s Isle of Wight Festival promised to be a raucous affair. The weather forecast was heavy rain but could the eclectic mix of performers ranging from contemporary urban music to classic rock give the 55,000 strong crowd something to cheer about?

After some rain and strong winds, causing a slight problem with the Big Top tent, the festival kicked off early on the Thursday evening, the ‘Campers Night’, with exclusive performances for those who were camping at the festival. Punk rock band The Stranglers and the Bobby Gillespie fronted Primal Scream were highlights of the night. The Stranglers delivered a set of songs packed with hits from their near 40 year career including crowd pleasers Golden Brown, No More Heroes, covers of the Kink's All Day and All of the Night and Dionne Warwick's Walk on By were all well received by the crowd that was high in spirits and clearly excited for the weekend ahead. The Stranglers set was faultless and proved to be one of the best performances of the weekend as a whole. Primal Scream finished the night with their brand of psychedelic rock, playing hits from their seminal 1991 album Screamadelica as well as treating the audience to their best Rolling Stones impression with songs like Country Girl and Rocks.

Friday, the official start to the festival, saw a slightly smaller amount of acts perform out of the three day festival. The first band on the main stage was Feeder, due on at 4pm, the main arena didn’t actually open until 4 because of adverse weather conditions from the previous day. It was becoming clear that despite the weather warnings the festival organisers were ill prepared for the conditions that ensued. It was a bit surreal when festival goers were allowed to enter the empty arena whilst Feeder had already started their set – a signal of the poor organisation that echoed through the whole of the festival.

The much hyped Lana Del Rey sang her way through a lacklustre performance of her recent chart hits that didn’t quite fully capture the audience’s attention. Warming up the main stage for Fridays headline act Tom Petty and the Heartbreakers was Example and Elbow, which made for an eclectic line up that undoubtedly catered to the diverse audience. Tom Petty and the Heartbreakers took to the main stage that night and didn't disappoint, playing classic songs I Won't Back Down, Free Fallin’ and Learning to Fly. Much to the content of their fans, they also performed the Travelling Wilbury's Handle with Care. During the latter part of their set things moved up a gear when Petty asked, "Are you ready for some rock ‘n’ roll?” before playing Refugee and American Girl. Hoping to catch the last 10 minutes of Crystal Castles after Tom Petty had finished, it was a bit disappointing to realise that their set time had been altered and they had somehow finished earlier than stated.

From the new and old, from pop to rock, day 2 saw an equally sundry mix of bands and artists prevail. From main stage acts like pop’s rising star Jessie J, to 70’s SKA band Madness to a performance by Miles Kane and The Charlatans on the Garden Stage. Unfortunately the latter two clashed with Saturday’s headlining act, Seattle grunge legends Pearl Jam – but clashes are to be expected at festivals! Pearl Jam themselves rocked through an energetic and breathtaking 23 song set. Lead singer Eddie Vedder was on fine form giving an impassioned performance interspersed with the occasional scathing attack on the world's banks. Their set was packed with material from a variety of their albums with plenty of songs from their debut album, Ten. The band played 2 encores and the audience would have happily listened to more given half the chance.

Sunday’s line up over in the Big Top tent had a rockier note to it, with rock bands The Virgin Marys, Black Stone Cherry and Pulled Apart By Horses all performing electric sets. Over at the main stage Noel Gallagher’s High Flying Birds played a slightly disappointing set, especially for those who wanted to hear some of his own, newer stuff as he just ended up playing a lot of Oasis material. It was a good job the headline acted needed no build up. Closing the festival on the Sunday evening was none other than blue collar hero Bruce Springsteen and the E Street Band. Playing an energetic, soul boosting 3 hour set The Boss was on impeccable form playing songs from his latest album Wrecking Ball and giving the Isle of Wight congregation a mixture of rock, folk and gospel. The anthems were out in force: Born in the USA, Dancing in the Dark, Born to Run, Glory Days, Badlands to mention but a few. At 62 years of age Springsteen is showing no sign of slowing down as he worked the crowd perfectly with his showmanship and charisma. Finishing his set along with a firework show Bruce performed a rendition of The Beatle’s Twist and Shout "I'm not leaving the stage ‘till the fireworks come on" he teased. His performance galvanised the crowd and made it possible to forget the horrendous weather conditions that everyone had had to endure. This was how you put on a show.

Extreme weather conditions, short sighted planning and overpricing, you could be forgiven for loathing the Isle of Wight Festival but the headliners provided enough to remind everyone why they were there and surely that is enough to say the festival was a success after all.

Reviewed and written by Emma Daniels and Lewis Tighe.