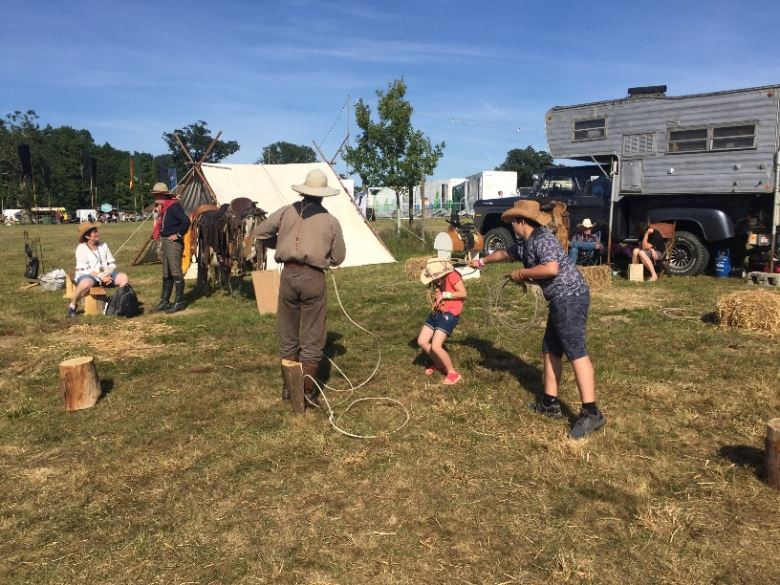 Yeehaa! The inaugural Black Deer festival was a foot-stompin' tear-jerkin' bronco-buckin' success. I'd been long under the impression I had no time for country music (let alone western), but after this feel good weekend my opinion is well and truly revised. Okay, it's not the coolest vein of music you'll ever pierce, it's often laughably lyrically unsubtle too, but I have a taste for the emotional stuff and most definitely for musical storytelling and both of these were present in spades. I'm not ashamed to say (well maybe just a little bit) that the weekend's many tales of heartbreak and disaster wheedled their way straight into my goddam ole heart - I found myself in tears more than once.

Black Deer was homely and friendly and, well, just fun. And its undulating weald setting was so utterly beautiful it took my breath away when I arrived on the Friday night, driving over the dusty lip of an almost African grand vista into the green gorgeous natural bowl of the festival site. I knew, and know, virtually nothing about country music so I didn't have any expectations of the main acts, bar Passenger - albeit I'm not sure how he qualified to headline this festival (I suppose as somewhere in the folk lexicon) - who was utterly brilliant, a true talent, a man with the softest soul and most heartfelt voice wielding lyrics like daggers.

As it happened he was pretty much the only main stage act I liked. It's a personal thing, the hard core country fans seemed to be lapping them all up, but for me the magic took place on the seven smaller stages. I just wandered around for most of the weekend, dipping in here and there, sometimes chancing across a mesmerising hoedown act, at other times listening with quivering lip to some of the most beautiful and melancholy tales of sorrow I've ever heard in a song. For me country is all about live music, believe me I'm an expert, as listening to this stuff on youtube afterwards didn't have the same effect. Some of the singers are so emotionally honest and authentic that it's impossible for a heart not to be broken - step up in particular Ashley Campbell, Glen Campbell's daughter, whose rendition of Remembering - a song about her father's descent into alzheimers - at one of the extraordinary songwriters' rounds was as beautiful a live performance as I've ever seen.

These songwriters' rounds were the highlight of the festival for me. Each day four or five of the main acts came to the marvellous Superjam stage to sing their songs unplugged to about a hundred or so punters, one song at a time in turn (around three or four songs each in total). The performances here far outstripped their main stage performances for me, it was the informal intimacy of the whole thing I think, the feeling of being amongst friends, dare I say it the heart connection...

Black Deer is a feeling festival, come along, have a great time, but most of all come along with an open heart. Perhaps it's because the festival is set up by two women that it's this way, but I've never felt this so keenly at a festival and the wealth of thought and caring that was evident in the excellent children's areas, in the variety of acts (a great many female acts by the way - the balance for once was wonderful), the well sited camping areas, the reasonably clean toilets (for a festival they were very good), the wide spread of ages, the even wider spread of types (country fans, bikers, young hipsters, farm boys/girls, a good number of disabled people, you name it), the good ole USA country entertainments - bucking bronco and lassoing to note two, the cowboy boot and other US country-tat stalls, and just the whole darn warm-hearted vibe, was very notable. The weather helped mind you, it was fantastic.

It's a kind of bijou Americana country version of Womad, (I've never heard Nashville mentioned so often in my life - my daughter suggested a drink each time we heard it from the stage, but if we'd gone for that I'd be dead), with some bone fide wonderful surprises amongst a fair bit of more run of the mill fodder. As well as Passenger and Ashey Campbell, the unplugged version, I loved Blackwater County, a rip roaring set, Stu Larsen, who played his set to about ten of us in the shade of a tree as he got held up by Eurostar and missed his stage time, Catherine McGrath, Dana Immanuel & The Stolen Band, Sarah Darling, and a whole host of other acts that I stumbled on by chance and just didn't get to hear their names.

The downside? Well I would have liked a few more main stage acts that were my sort of thing, it was a bit too anodyne up there for me, and it would have been good to have had a few more food choices for veggies, vegans and your gluton, lacto etc free types. Mind you, if you like meat you'd have been in carnivore heaven. Oh, and the signage to the festival wasn't much cop. And that's about it.

Maybe it's my age, I'm the right side of 50 (that's over 50 to all you ageist younger f**kers), but I've a feeling in my bones that country Americana, country Englandcana too, the good stuff that is (and there is some good stuff, it's kind of white blues at its best) is going to move more into the cooler mainstream in the near future. Perhaps though it'll ever remain a guilty pleasure, something to listen to behind closed doors, wearing a false moustache and straw wig. Whatever it's fate, hold onto your hats (Stetsons obviously), country music is comin' to get ya!