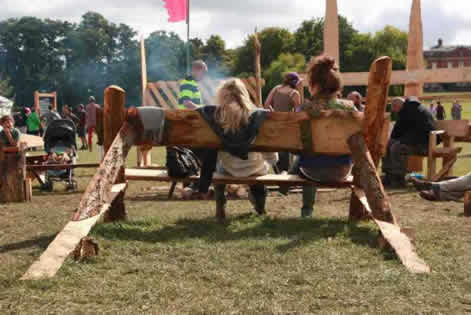 I made the decision to take my three children to Shambala after going without them last year. Of all the festivals I have been to it is still the friendliest and after watching my friends with their children last year I knew this year I could not leave mine behind. It was partly the practicalities that persuaded me, the site is just the right size for little legs not to get too tired and it is not hilly so there are no dragging sleeping toddlers in buggies up steep slopes in the dark. Family camping is very close to the car park so it is not too far to carry all the inevitable stuff that children need to camp. The toilets are practically always spotless so I had no worries about the children finding anything horrid.
However it was all the thoughtful details that really made me want to bring my children to Shambala. There are a few festivals that really cater well for families with young children and babies - and Shambala does too, with a baby bath yurt, a breastfeeding tent, milk warming facilities etc. But my children are not very young and we have struggled at other festivals to find them something to do and this is where I was surprised and pleased to see all the different craft activities available all being taught by wonderful patient souls. They whittled their own wooden mallets (which actually came in very useful) and kazoos (don’t forget your earplugs), painted parrots, wove baskets, made garlands, sculpted clay dragons, learned some circus skills, did a dance workshop, I could go on and on. Some activities are free, others require a small donation and some you pay for materials. What was so nice for the children is that because of the size of the festival they are able to be a little independent and suit themselves with what they want to do and when they want to do it and they could easily come back and find the adults when they needed, particularly when they wanted feeding, although for once they were more interested in what they could do than what they could eat which is a rare occasion and a fortunate one since I had forbidden them to bring computer games or consoles!
Saturday is fancy dress day at Shambala, actually every day is fancy dress day at Shambala but there is a huge effort made far the parade on Saturday evening and I have never seen the like. Last year I was surprised at how so many people took part this year I was astounded. Even my 13 year old who is not known for getting involved with dressing up when he saw the extent of the fancy dress started furiously making himself a costume out of boxes and rubbish bags so he could join in. My daughter, who is into getting dressed up made use of the many stalls selling ears and tails and all sorts of accessories to go with her costume and so we joined the parade - I really think everyone at the festival was in costume and at the parade and had made a massive effort so forget your costume at your peril you really will be the odd one out.
After days spent pottering around making things and joining in with whatever we could find going on we wrapped up warm to enjoy the nights of music and dancing. Whatever music you are into you will find it at Shambala along with poetry and performances of all kinds, there is always something different on the main stage and various types of dance music in various tents. I have to say I think the music from what I heard was better than last year and I did hear it going on until the early hours but we didn’t last long at night apart from making it until midnight on the Friday they were all too tired from running around and being entertained all day so we stayed at our tents whilst the party continued.
It’s hard for me to think that I might not have Shambala to myself for the next few years but the children had such a good time and it felt like a safe place to let them have fun that I think I will have to take them back there, it really is the most family friendly festival I have been to. I was even handed the Festival Newsletter as I left which had been put together and written by children at the festival.
Shambala was as entertaining, as beautiful and as friendly as ever- if harder work with three children in tow- but it was worth all the effort. My only advice would be if you haven’t been in a roller disco for 25 years, the floor is a lot further away than it used to be!

Published on 13 September 2011 by Cathi Moore