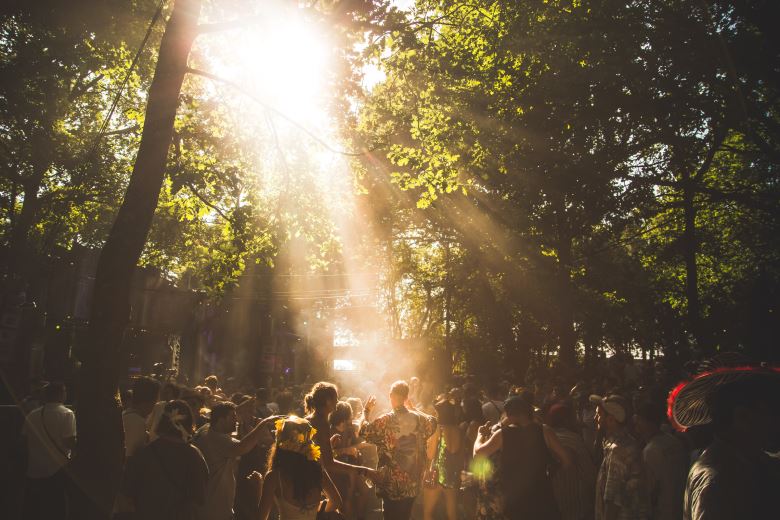 This year the team behind Farr pulled all the stops and gathered the people under what has now become a household name on the house and techno scene. Now in its 9th season, names like DJ Stingray, Dixon, Mr G and Or:la were to be expected, but it was the festivals efforts at change and adaption that we were most interesting to observe and report.

This year The Factory (main stage) really came into it’s own. With increased sound levels and a more considered and live booking approach, this area became an obvious highlight.

Tom Misch has progressed from being a quiet unassuming beat maker and guitarist to a showman extraordinaire. With hip hop and jazz at the heart of things, Tom has now gathered a considerable fan base and despite a movement towards a more pop orientated sound, he still holds true to his influences. An obvious but thoroughly rewarding booking for any festival- good choice Farr.

Mount Kimbie were brilliant. The use of Silhouette was a clever touch, as the band pumped out their synth heavy festival-ready set as black shadows against an ever-changing and vibrant backlit stage.

Maribou State opened with tropical guitar led melodies. The band were soulful, professional and led us through the best sound quality we received at The Factory stage all weekend. The set was laden with catchy vocal samples, playful upbeat synths and casual friendly vibes.

Another positive development at Farr this year was the introduction of reggae, dub and soundsystem culture. The weekend saw some big names on this circuit, with Jah Shaka, Earl Gateshead and Adrian Sherwood all showing up to represent. After a weekend of brutal sun and heavy techno, Sunday morning saw Peng! Sound taking things slow and bassy with an extended set full of dub plates in a bid to showcase their underground Bristol sound.

Unfortunately for the reggae and dub artists, as the festivals audience seemed to consist of mostly house and techno lovers, their sets were fairly quiet. However the change in tone, sound and speed was extremely welcome and definitely added a necessary new dimension.

Mifalda set things off funky on Friday with feel good sunshine music in the forest. This year there was an effort to counter sound limitations with more top end being provided by tree mounted Funktion1 monitors, and the slow afternoon soulful jams took to these like a charm.

Even Tuell killed his set in the Campfire Headphase stage. There was a trim and consistent 4x4 set up to the bass lines with licks, tricks and spacey displaced synths to keep the avid tepee stomper dancing.

Terekke was a huge surprise and the contrast from his set last year could not have been greater. Last year in the very same tent he mostly sat on the floor and played atmospheric minimal sounds in what was an interesting delve into his chilled and quite selections.  This year the tepee den was not the slow relaxed zone of the past and Terrikke responded with super loved-up disco vocals on a silky bass lined funk odyssey. Whether or not the quiet recluse we saw last time has fallen madly in love in the past year or just reinvented his approach I’m not quite sure, but either way this was probably the best disco set of the weekend. Interstellar Funk followed by Antaal and then Hunee to close was serious. Hunee went way harder than I’ve seen him play before which was nice to see.

Another aspect of the festival this year was the undeniable lure of the World Cup. The fixture was shown on a big screen at the factory and those that managed to sort a ticket piled in for the game. A nice touch from the festival who obviously went to a lot of effort to sort this out… festival football was a pretty nice way to see out the end of our campaign success!

However, not everything can go to plan and there were a few ways the festival stumbled this year…

They really struggled to prepare for the sunshine. As much as we all dream of an actual tropical summer, this year it arrived and not everyone is used to partying in it. People were half collapsed and sleeping everywhere – on the paths, outside food stalls and across the entire floor of the only communal tent spaces. I think it was easy to assume that the expansive forest used at the festival would provide enough shade, but the lack of seating areas meant that was simply not the case, and as a result the party lacked a lot of pace and energy.

The Campfire Headphase area was an escape zone last year and pretty much solidly stuck to a more relaxed programming. This year this only really happened in the daytime…by night the heavy house and tech sounds of the forest rolled out into the other spaces and didn’t really allow those that were struggling or not on the same level to ease themselves into the party.

Smirnoff paid a fortune to have their name splashed everywhere and took ownership of the Ma Dahu stage. Everything about this move went wrong; they switched the layout which made it more of a pass through zone than a party hub, the décor was minimal and a bit haphazard and the whole thing seemed to be focussed on making sure the Smirnoff signs were in all the photos. Despite having the best sound set up by far, this area really struggled to hold punters all weekend and was a big let down from the absolute vibes of last year.

All in all Farr put together a really good line up this year. They struggled a bit with the sunshine and a massive influx of a very young crowd, but they did introduce some interesting developments and have set themselves up nicely for their 10th Anniversary next year.