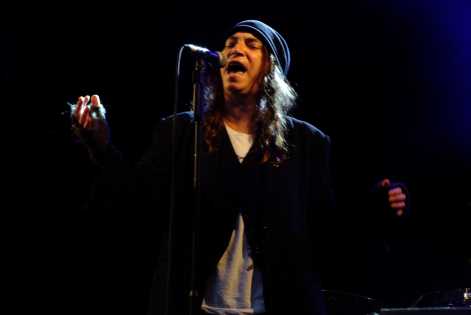 One of my favourite festivals, End Of The Road took place at the beautiful, breathtaking Larmer Tree Gardens last weekend. The diverse family-friendly, cutting-edge music festival played host to a huge range of bands from Folk Singer-Songwriter Roy Harper and legendary Punk-rocker Patti Smith, to new kids on the block Alt J and Alabama Shakes.

As I wander through the gates I remember that here at End Of The Road there's always live music on the go and everyone gets along like they've known each other for years. The site is a wave of T Shirts with pictures of old alternative bands, that most of us have forgotten. This festival is run by music lovers for music lovers.

The place was packed for buzz band of 2012, Alabama Shakes. The band brought their mix of rock, country, and of course soul, topped off with the refreshing soulful raw-sounding voice of Britanny Howard! After her exceptional high-energy show, sweating all over Britanny gave me a quick interview. She told me that the festival seemed great fun and that the crowds are amazing, in fact friendly bassist Zac Cockrell thought they made the show and said he was feeding off them. She also said that her most major influences are Tina Turner and AC/DC. Then in her warm voice she told me about how when they started out they used to turn up at bars and say 'we're the Shakes, here's Let There be Rock!!!'

One of the coolest areas of the festival is the woods. There is a magical atmosphere, especially after midnight. On the last night I found myself bumping into a human jukebox. Decorated with fairy lights and red drape  'Pip's Jukebox' plays live what ever you feel like hearing out of his 300 songs of many genres! Then there was the piano stage where quiz addicts can get their fix with loads of games and quizzes the best of which was Ringo:Music Bingo. The outstanding moment on this stage was of course when Patti Smith did a surprise and inspirational talk. Patti told us about how we, the people, have numbers that will scare the people who take power away from us, how pussy riot shouldn't have been jailed, how everyone could form a band - "JUST DO IT", how we should listen out for new voices all the time, and about her book 'Just Kids' on her relationship with Robert.  As night drew in you can find people jamming on the piano stage and most of the audience singing along. Further into the woods  you will find a pirate ship housing a disco with great DJs and packed dance floors until the early hours.

I also spent a lot of time in the woodland library. The library has a book shelf that winds round a tree topped with a life-sized unicorn head. Plus there’s cool seating, gorgeous lighting, and a book shaped stage! That all adds to what makes it one of my favourite literature areas on the festival scene. There are loads of quality acts, booked by the excellent compere-librarian Julian Mash, that are right up my street. Most of the authors write about music, often at a different angle. My favourite talk was by Guardian journalist Dorian Lynskey about protest songs. I thought the best bit of the talk was the large part about Dylan and all the different points of view on him at the end of his newport folk days. I also loved his chirpy always half-smiling style.

My favourite stage though was the garden stage, where people would lie down on blankets and watch the great music on offer while taking in the scenery around them. There was of course the hardcore punters standing at the front, but everyone could still see. This stage was great for parents as right by the sound desk there was an area that was left for kids to run around while you could still see and hear the music!

A friend’s kid, Jack, came to see us in the woods smiling all over holding up a really cool telly he'd made,  it had dinasours bouncing around inside. He'd just come from the kids area and told me to check it out. I wander in, trying to remember the last time I set foot in the childrens section at a festival, only to see one of the best circus skills tents I've seen on the circuit. Organized by circus entertainer Steve Kaos, everyone seemed to learn loads while having lots of fun. Then there was the croquet lawn which both kids and adults enjoyed, plus Bristol Folk Tales ran a storytelling yurt, which merged into another yurt which played host to kids songwriting workshops, and finally the craft area of course!

Punk legend Patti Smith sang in her powerful voice and played a passionate set. My set highlight was an extended version of Gloria, in which she payed tribute to russian rockers Pussy Riot by spelling out their name, leaving me and many others with goosebumps. The set also featured her big hit - Because The Night, which she sang brilliantly and just in the way everyone imagined her to. It actually woke me up to what a great song it is! It was a show that everyone there will be talking about for a long time.

I managed to get an interview with Patti before the show. As Patti & I sat down, I was trembling all over. She's  extremely friendly but when Patti's presence is near you can tell she's an incredible person. She told me how she thought the festival was great and loved the way they'd mixed nature and music. She also said that sometimes she dreams up a song and when she wakes up she quickly scribbles it down. Although most of the time the band come up with music and she fits the lyrics around it. She finished by telling me that she's just done a new record, Bangra – (that means ‘dog’), that she's touring and then after that she's going to be taking a break to write another book! My hat’s off to you Patti.

I finished my festival in the ti-pi by watching the Hurrah for the Riff Raff. Their gorgeous heartfelt country tracks feature the amazing powerful vocals of Alynda Lee Segarra. Their lyrics are also great. They closed with their version of The Ronettes 1963 single ‘Be My Baby’. The Riff Raff invited lead singer of Alabama Shakes, Britanny Howard onto the stage and also me (Ned the Kids Dylan) to join in on the vocals. Festivals are full of spontaneous moments – but does it get any better than this?!

These were my personal favourites but you are spoilt for choice with great acts: Graham Coxon, Anna Calvi, Alt J, The Dirty Three. I had one of the best weekends of the whole summer. It was great to be at such a pretty festival where there are so many of those little things that you just bump into to make the festival unique. Thanks to Simon and Sofia and the crew, for putting on another brilliant well organized weekend in Dorset!

Published on 05 September 2012 by Ned Mansfield