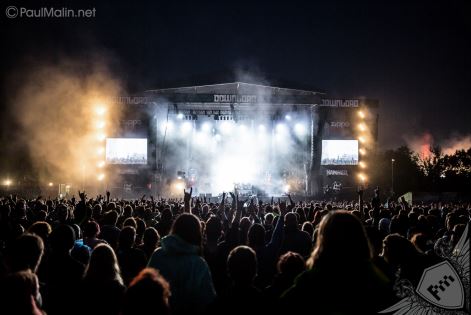 Looking at the lineup ahead of time, it would be easy enough to think that the UK's premier heavy metal festival was suffering from a serious identity problem. Download has often raised an eyebrow with its band choices in recent years, but in 2015 - as Muse and Enter Shikari joined the likes of Slipknot, KISS, and MarIilyn Manson as headline acts - it looked more divisive than ever. But should that really matter? Festivals are, at their very purest, a celebration of music with like minded people, and Download is the absolute epitome of pure music celebration. In fact, the first three festival goers we spoke to on Friday gave probably the perfect responses to sum up the atmosphere:

* "Do you know what time Muse are playing?"

* "Why won't it stop raining? KISS lied, God didn't give rock and roll to us, he hates it!"

The first two comments are typical responses for the common festivalite - drunken people looking for the music they like in a rush, and others dazzling crowds with asinine chants for bands that aren't even playing. But the last comment, well that's just typical Download. Once again the festival found itself cursed by the terror that is an English summer.

This didn't stop Friday's headlines Slipknot from unleashing a violent metal assault on the baying crowds of Download amid a frenzied downpour. But a little rain and ankle deep mud wasn't going to be enough to stop the crowds of Donington from launching into violently energetic circle pits for the likes of 'Wait & Bleed' and 'Before I Forget'.

Truth be told, it was the perfect end to a positively soaking day of music. At The Gates summoned a small but lively crowd for their early morning ageing death metal sound, while southern rock outfit The Cadillac Three managed to deliver a tight and mega groovy set in spite of a 20 hour flight from Nashville to reach the UK. But it wasn't until blues rock legends Clutch took to the stage that everything came together. From the monstrous sing alongs of 'The Mob Goes Wild' to the dance-tacular grooves of DC Sound Attack (who doesn't love a little cowbell?), Clutch set a furious pace that Judas Priest, Dragonforce - even with a surprise appearance from BabyMetal - and Five Finger Death Punch failed to match.

The rest of the weekend was no less of a good time, but something of an exercise in exhaustion as the crowd braved the swamplands of Donington. Despite the weary spirits, an on-form Marilyn Manson and unsurprisingly well-received Muse went to great lengths to keep the people partying.

Where should we begin? Perhaps with the extravagance of indie rockers Muse; not only battling the notion that they weren't suitable headliners, but also the high-speed winds that threatened to tear apart their sound from time to time. Regardless of whether you're a fan or not, it's hard to dispute the band's relevance following a thunderous set that featured all of the visual splendour and effect-ridden riffs that we've come to expect from Matt Bellamy over the years. In fact, Bellamy - a self confessed metal fan - revelled in what could only be described as the biggest crowd of the Saturday night, delighting the sea of bobbing heads with hit after hit and the occasional Led Zeppelin riff thrown in for good measure.

But it was on the adjacent stage where a rejuvenated Manson proved he could still pull a bloody good time out from years of ceaseless self destruction. Last time out at Download the malevolent beast was a sweaty, incoherent mess, this time, however, it was pitch perfect performances of timeless tunes 'The Beautiful People' and 'Angel With The Scabbed wings' that proved the goth king still has plenty of life in him. As we eventually got to a, frankly, ridiculous duet with rapper and Bodycount frontman Ice-T, Manson perhaps proved once and for all that he still has the stones and energy to headline a major festival in this day and age.

The good times didn't stop here of course, and for those that were willing to brave the battleground-like conditions, rock n roll joy was in plentiful supply. From Andrew W.K's pure party antics that whipped a sweaty tent into a mosh-frenzy and the southern rock styling of a wonderfully chill Blackberry Smoke, to the overflowing confidence of Billy Idol's hit laden set and a wonderfully joyous Guns 'N' Roses heavy set from Slash & friends, there was plenty to smile about and enjoy at Download - even if time between sets was left to deliriously trying to purchase a plastic bag poncho that would survive shoulder to shoulder crowd.

By the end of what can only be described as an exhausting weekend of heavy metal induced awesomeness, Mötley Crüe had little to do to get the packed crowds singing along. As the glam outfit said its final farewell to the Donington crowd following a pyro and hit heavy set that didn't skimp on the spectacle, there wasn't a frown on the ground. This, truth be told, got everyone in the perfect mood for a final eruption of good times. The almighty KISS once again proving that they deserve a place in the pantheon of rock gods with an hour and a half of glorious harmonies, zip-wire acrobatics and more fireworks than a Fourth of July celebration. Better still, if glam rock majesty isn't you jam, Suicidal Tendencies brought their particular brand of punk-thrash heroics to the smallest tent on the grounds, gearing the crowd up to tear apart what was left of Donington park. Whether you finished your festival caught in an earth-shattering sing along to 'Rock and Roll All Night' or a ferocious stomp mosh to 'War Inside My Head', Download 2015 won't be a weekend anyone in attendance will soon forget.

Published on 18 June 2015 by PaulMalinPhotography