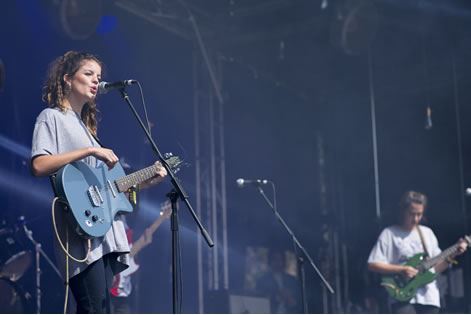 The Deer Shed Festival has just come to a close for another year, with Andy Kershaw just leaving the stage after a three hour DJ set of global dance tunes.  Kershaw’s set might have been Summery but the weather on Sunday evening was not; but whilst the rain might have dampened the ground, it certainly hasn’t dampened anyone’s spirits.

For most, the highlight of Deer Shed 6 will John Grant’s rather special Saturday night performance, which saw him finish his Pale Green Ghost Tour and turn 48.  This was a show that began with a spontaneous rendition of Happy Birthday from the crowd, included a guest appearance from Connor O’Brien of Villagers and ended with a beautiful version of Queen of Denmark.   All this in front of the back drop of a hot air balloon glowing majestically against the clear, night sky.

However, Deer Shed 6 wasn’t a one trick pony and certainly had plenty of other musical highlights.  SLUG kitted out in full naval gear was a surprising highlight of Friday, whilst Cash+David put on an amazing show that had people talking for hours.  Later Friday evening, festival-goers were given the headache of trying to choose between the edgy, rock stylings of Du Blonde and the pop-soulfulness of Dan Croll before everyone headed to the Main Stage to sing, laugh, and learn with the incomparable Billy Bragg.

Saturday too brought a plethora of incredible performances.  Hind’s Main Stage set was exceptional enough to coax even the sun from behind the clouds for a few hours.  As afternoon bled into the evening, The Wedding Present took to the stage wowing audiences and ending with the fantastic My Favourite Dress, whilst Dublin’s Damien Dempsey offered a mesmerising show stunning the crowd with his powerful voice and more powerful lyrics ending with him leading his ever-growing contingent of Yorkshire fans in an impassioned sing along.   And after that, festival goers were treated to a beautiful and confident set from Villagers before everyone settled in for the amazing John Grant.

Whilst Sunday brought an afternoon of rain, the festival wasn’t finished yet and the crowd were treated to two shows from the wonderful Rozi Plain, an incredible, weather-defying stage performance from Ibibio Sound Machine and the main stage finished with the always delightful The Unthanks.

As always with Deer Shed Festival, the music is only half the story.  The cabaret and comedy line-up was stronger than ever with Funz and Gamez, Pappy’s, Slightly Fat Features, Shlomo, and Racing Minds all drawing fantastic crowds in the Big Top.  Over in the literary tent, people were treated to an array of stories from the great and greater of the music industry including Billy Bragg, Viv Albertine, Rick Buckler, and Andy Kershaw.

Unsurprisingly for a festival whose audience is almost 50% children, the workshops and science activities and the outdoorsy treats such as a field of swing balls, Quidditch lessons and den building all proved popular too.

The UP IN THE AIR theme encouraged people to keep their eyes to the skies, where they would have seen hot air balloons, bubbles, spitfires, and rainbows (most of which were organised by the festival).  There was a lot of expectation on the festival this year as it sold out in record time and overall it delivered.

The Deer Shed Team are already thinking about how to improve for 2016 and tickets for Deer Shed 7 will be on sale from 14th September.