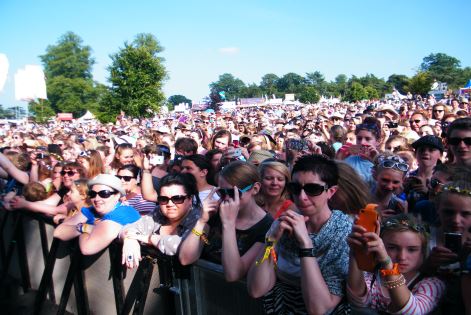 I had never gone to the Cornbury Festival before even though there have been acts on the bill that I have wanted to see, this year I went down for the Saturday and the Sunday of what I have been told is the poshist festival in the UK. Squeeze, Imelda May and The Overtones had played on the Friday of the festival and there was a nice atmosphere as I arrived and pitched my tent at this year’s event and everyone is in good spirits. This is an upper class festival and the tickets are as expensive as Glastonbury, Download and Reading so was it really worth the money because the bands are not as big. I had a good time and you don’t have to worry about the stuff in your tent because everyone is really friendly and stealing is the last thing on their minds. For a lot of the people going to the festival this is the only event they will go to this year because they have kids. The reason they can go to this event is because they can bring their children with them, this is a family friendly festival and everyone can go. Everyone seems to be having a good time and other than music the festival offers a lot from a fair with rides to throwing welly’s to win prizes, to sampling the selection of Ales on offer. You might pay more to get into the festival, but you save money in other places from being able to buy a can of coke for a £1 to the cheapness of the food in comparison to the bigger known festival events.

The first act that I decided to check out was

JJ Grey and Mofro *** (Songbird Stage) an artist which I reviewed not too long ago. With his new album out ‘This River’ he starts to impress with new material from that album including the brilliant 'Somebody Else' which sets a very good chilled atmosphere to the days line-up and there are a lot of people digging the music he is producing. The weather is really nice and hot and there is a really nice family vibe to the festival with everyone bringing their kids to this year’s event including the Prime Minister David Cameron who is in attendance with his family. Also if you looked towards the VIP bar you can see Jeremy Clarkson off BBC's ‘Top Gear’ enjoying the beverages that are on offer.

Lawson **** (Pleasant Valley Stage) pretty boys that have been making waves in the Pop music charts have an army of girl followers packed up the front of the stage singing ever word and screaming. Lawson have really been on a high recently having hits with 'Learn to love Again, Standing in the Dark' and new song 'Brokenhearted'. The thing about Lawson that a lot of Pop bands don't have is they play all their own instruments and write their own songs and their song writing is of a very high standard. If you have not got their album ‘Chapman Square’ I advise you to grab a copy because I can’t stop playing it.

James Arthur ***** (Songbird Stage) won last year’s X-Factor and ‘Impossible’ his debut single has sold more copies than any other winning artist in  the shows past. James is an artist that should be at the top of his career at the moment but interest has diminished with him album not being even in the shops yet. There are still a lot of people though waiting at the Songbird stage in anticipation for his performance.  James comes onto the stage with some arrogance and breaks out into some of his new material. We can see from start to finish that the new songs are simply brilliant and the standard of the song writing is of someone way past his years. He mixes up this new material with a couple of songs from Lauren Hill a female singer best known for her work with The Fugues. I like how James always makes a song his own and brings something new to it. He ends his set with a slowed down version of ‘Impossible’, this song has had a un-need revamp and this one does not sound as good as the original. If something isn’t broke there is no need to fix it. I think you will be hearing a lot more from James Arthur in the future.

Echo and the Bunnymen ***1/2 (Songbird Stage) have been going for years and are a little out of place on this year’s bill but they have played this festival before, but I think their dreary brand of Indie / Goth doesn’t work in a festival filled to the brim with the English aristocracy. Opening up with the grip taking ‘Going Up’ they start of well  and continue it with great versions of ‘Do it Clean’ and ‘Bring on the dancing Horses‘ but songs like ‘Seven Seas’ just sound a little depressing and dreary and not right for the hot day. This is a set of classic Bunnymen material and if you’re a fan you would have loved it but I am not sure a lot of people in attendance really knew the material. They get a few people moving when they hit ‘The Killing Moon’ a song made famous recently by the film ‘Donnie Darko’.

Keane **** (Pleasant Valley Stage) end the Saturday at Cornbury and it is nice to see them headlining a festival for a change. Tonight they give the fans just what they want a collection of songs including a lot of material of their first two album ‘Hopes and Fears’ and ‘Under the Iron Sea’ along with some new material of their album ‘Strangeland’. The whole stage is set up with ‘Strangeland’ above it in lights and singer Tom looks really at home on the Cornbury stage while he sings classic hit ‘Bend and Break’, other great moments in the set included a great version of ‘Bedshaped’ a song I thought would be hard to do live because of the high parts in it and ‘Is it any Wonder?’ a upbeat song that really gets the crowd going. Along with the massive hits ‘Everybody’s Changing’ and ‘Somewhere only we Know’ before ending the main set with ‘Crystal Ball’ which sounds better than it has ever done, before they come back on for a one song encore of the Queen song ‘Under Pressure’ and it sounds amazing. Rumours had been going round that Keane were past their best if that is true I would have liked to have seen them at their best.

Hugh Cornwell * (Pleasant Valley Stage) is the legendary singer of The Stranglers and he is on early today. You can’t see why he is so legendary by his set today which just seems like very bad pub Punk / Rock.

Bo Bruce ***** (Songbird Stage) the lady that should have won The Voice comes on the stage like a character out of a fantasy novel and when she opens her mouth an amazing voice comes out, She is totally breathe taking and not something you would expect to come out of a reality TV show. She has such a stage presence and you can’t not look at her, and it’s not because she is wearing no under garments it’s because she is totally stunning. She comes from the same background as most of people that are attending the festival and fits in really well. Her album ‘Before I Sleep’ hasn’t done as well as it should have, but with songs like ‘Save Me’ I have no idea why, this songs like a creditable Tatu meets the Coors but it has something else. I will be seeing what she does in the future; she really has caught my eye.

Wilko Johnson ***1/2 (Pleasant Valley Stage) is best known for being the singer of Dr. Feelgood is sadly dying of terminal cancer. The news that he only has a couple of months to live has made him be more alive than ever, playing shows all around the World to packed audiences. So many people want to make sure they see a living legend while they can. He is really lively on stage you would not believe that he is dying because he has such life in him pulling faces at the audience and his band. He performs classic material from his solo records and classic Dr. Feelgood numbers, so everyone is left with what they came for and glad they could see him for one last time.

The Silver Seas **1/2 (Songbird Stage) are a little bland today but they do have a good stage presence, even if it is a little boring. The band mix up Blues with Indie and Folk and have released quite a few albums in the last couple of years including new one ‘Alaska’ . I think this band work better on CD and maybe if I knew a few more songs I would have enjoyed more.