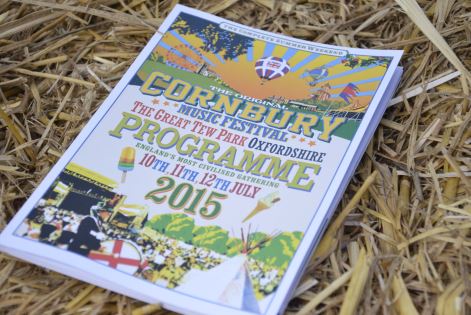 Cornbury Festival entered its 12th year with style and a little something for the whole family to enjoy. As a seasoned veteran of both Reading and Download Festival, Cornbury was a very different experience! Accompanied by my husband and two year old son, we arrived at the festival site in the beautiful Great Tew Park, just outside Chipping Norton in the Cotswolds. The first thing to catch your eye are the glorious views of the Oxfordshire countryside from the campsite, this coupled with the wonderful weather and the immediate feel of family friendliness got the weekend off to a great start.

Unlike a lot of festivals, what makes Cornbury stand out is that it is much more than just a music festival. It is like a food festival, carnival, literature and comedy festival all rolled into one. It is small enough to feel safe with little ones, but there seems to be an endless amount of things to do and discover for young and old (and everything in between!) We spent some of our weekend at the hay-bales of the ‘Riverside Stage’ – this was one of the smaller stages where unsigned and up and coming acts do their thing. The hay-bales kept our two year old entertained while we soaked up what was on offer; The Fireflies were a great start to the festival, a boy-girl duo on guitar and keyboard with a beautiful folky sound, Brightworks and Fourth Time Lucky picked up the tempo and one of the stand-out acts on the Riverside stage was Leader, a local band with great energy who attracted quite a crowd!

Festivals are always a place of discovery for me and Cornbury didn’t disappoint, there were some great acts from home and abroad – Jess and the Bandits on the Songbird Stage were fantastic, a five piece with gutsy, soulful female vocals. I even had the chance to hear them play backstage for ‘Under the Apple Tree Sessions’ where they played some of their own tracks with a Tom Jones cover that really showed off Jess’ vocal talents. Meanwhile on the Pleasant Vally stage, Striking Matches - country duo Sarah Zimmermann and Justin Davis from Nashville, Tennessee - treated the crowds to a bluesy, foot-tapping set. You could really see from their performance how much they love the music they create together, something that was also recognised by ABC’s hit series ‘Nashville’ who have featured Striking Matches on their soundtrack. The greatest discovery of the weekend for me was Larkin Poe, two sisters from Atlanta, Georgia. Effortlessly cool, rocky, bluesy greatness! I enjoyed their set so much I went straight to the merch tent and got myself a copy of their latest album Kin. If you take nothing else from this review, go and check them out, you wont be disappointed!! There were some great performances from more established acts such as The Fratellis, Razorlight, Sir Tom Jones and even Blue. Definitely a wide range of musical tastes and genres catered for across the three main stages.

Whilst stopping off for a much needed ‘wake-up’ coffee at Café Nero (yes, the festival had its own!) we stumbled across an acoustic stage in the back of their tented coffee shop. We listened to a performance by Leddra Chapman, who has previously toured with Sir Tom; a truly beautiful voice accompanied by some acoustic guitar was the perfect compliment to our cappuccinos!

As I said, Cornbury is much more than just the music. There were the usual festival stalls selling hats, floral headbands, vintage clothes and silver jewellery. But what was definitely not ‘usual’ about Cornbury was the food. Forget a dodgy burger van, this place has lobster, organic pies, and even roast dinner! There was a very British ‘tea shop’ – Tea for Tew – where you could get a slice of home-made cake and a cup of earl grey, the plastic tables were all adorned with flowers and there was bunting galore!! There were also two ‘pubs’ on site complete with pub benches to sit on and most importantly a gin and tonic bar that served a vast array of gins and Fever Tree mixers. A comedy tent featured the likes of Katherine Ryan, Joe Lycett and Aisling Bea and a stage for poetry, hosting our very own national poetic treasure, Pam Ayres!

The festival is 100% family friendly, with free activities for kids of all ages to enjoy. An arts and crafts tent, kids entertainment acts, circus skills, even Tatty Bumpkin - children’s yoga! Needless to say our two year old was never bored, he was chasing bubbles, dancing to the music and making his own little friends along the way. There were also children’s fairground rides and walk-about acts popping up here and there. Lots of parents had opted for drag along trailers, complete with bedding and pillows, so little ones could sleep while the parents had a few more cheeky G&T’s! Our son keeps asking us to go to ‘The Festival’, so Cornbury, maybe this is the start of a summertime family tradition for us all!