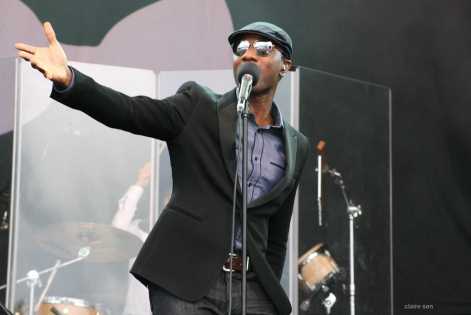 Despite the rain, Cornbury (otherwise known as ‘Poshstock’) was full of lovely people once again for it’s 9th year at the Great Tew Estate, Near Charlbury, Oxfordshire.

Every year it surpasses people’s expectations. Many said that they come back religiously and every time it just gets better and better. The line up was once again strong with Jools Holland, Macy Gray, Seasick Steve, James Morrisson, The Waterboys, Elvis Costello, Pixie Lott and Aloe Blacc, Hugh Laurie and the Copper Bottom Band.

Macy Gray featured on Saturday early evening and dazzled in a beautifully flamboyant sea of sequins. Her Grammy award winning voice was full of soul and the audience were blown away by her talent. Amongst her most famous hits was a funky blues version of  the aptly titled ‘Here comes the rain again’ taken from her latest album, ‘Covered.’

Hugh Laurie was on not long after Macy with his Copper Bottom Band. Who knew this actor was also an outstanding musician? Not long ago he was playing Cheltenham Jazz Festival testing the water and now there’s no stopping him. His piano playing was mesmerising. He can also really sing too. Let’s hope Hugh appears more over the year with the band as the audience absolutely loved them.

This year I decided to spend a little more time checking out the comedy, which was brought to us by Absolute Radio. Most exciting for me was the lovable oldie, Barry from Watford. Barry was brought to my attention through Iain Lee’s live phone in show on Absolute Radio. His tales of his hideous but ever loving wife Margaret and banter with callers gained him a following of dedicated fans. He now features on Steve Wright’s Radio 2 programme and performs monthly at the 100 club in London. His performance at Cornbury was the highlight of the evening for me. If you want to experience this warped old man for yourself, his next appearance is at Watford Palace Theatre on the 20th July.

Also featured on the bill were the super talented Richard Herring, Adam Hess (another hilarious comedian) Flange Krammer (disgustingly brilliant), Jarred Christmas and Frisky and Mannish. With comedy on all day every day over the course of the three days you’re spoilt for choice. This is the place to discover up and coming talent.

Cornbury is one of the leading festivals in the UK and part of this is down to the fact that you can take your whole family and you can feel safe there. It has an intimate garden party feel and everyone is friendly. The facilities are the best I’ve ever experienced at a festival and the shops, stalls, pop up cafes and food tents are all expertly picked for their variety and quality. The food is incredible, fresh and good value for money. You could pick a different country’s cuisine for every day you were there and inbetween that, you can sample the hot doughnuts, crepes and coffee. There’s also a farmers market and home made cakes on offer. (Made by actual old ladies…brilliant!)

There was plenty for the children in the kids area. Apart from the funfair, there’s always the popular circus skills tent and also there are the Puppet Shows, Songs for Kids, Storytelling, Bhangra dance, Bollywood dance, Clay-making, Willow Tunnels, Tin Pan Annie Family Music, Funky Festival Crafts, Face-painting, Graffiti Wall Street Show, Carnival Masks and Tatty Bumpkin Kids' Yoga. For the exhausted adults why not try the Therapixie Massage and Therapy tent next year. There are beautiful vintage clothing stores too, unless you’d prefer a pair of pink sequin hotpants from the fairy shop. Very tempting.

Every year there are loads of celebrities there, which isn’t much of a surprise if you know Cornbury. It’s the place to be seen. As it’s based in the extremely affluent area of Chipping Norton, you can expect to see a lot of people with a lot of money. This year David Cameron was spotted once again enjoying the weekend with his children and wife. See if you can spot him in the photo section!

Lastly, I would like to give a mention to the anonymous eccentric couple who every year without fail dance non stop to every band at the Riverside Stage for every day that Cornbury is on. They bring joy to everyone. We salute you!