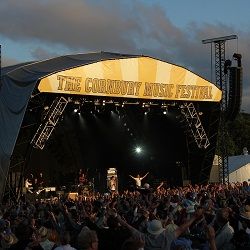 For the last six years, the rural Oxfordshire village ofCharlbury has been home to one of the most easy going and family friendlyfestivals in the U.K. The Cornbury Music Festival is the brain child andpassion of Hugh Philimore, acclaimed event organizer to the rich and famous,and began when he approached Lord and Lady Rotherwick, the owners of thespectacular Cornbury estate, with his idea of a festival on their land.Needless to say, they thought it a wonderful idea and Cornbury Music Festivalhas become a permanent and eagerly anticipated fixture in the local calendarever since. But if you thought this was just another teenage pop-fest, thinkagain.
The first thing you notice when arriving through the gatesof the Cornbury estate is the space, firstly the amount of it and secondly itsbeauty. The idyllic rolling countryside of Oxfordshire continues into theestate, forming the backdrop and very essence of the festival. From the mainarena, encircled by tall oak trees, to the meandering walkway betweencampsites, one is constantly aware of the pastoral charm of the setting. Havingbeen informed of the stunning lake that lies between the spacious campsite andthe main stages, and of the weather that was expected, I made sure to pack myswimming trunks. The lake was, as described, large and peaceful and secludedand made for a wonderful midday break from the crowds and music. It seemed tome at the time, as now, that this might well be another idiosyncrasy ofCornbury that is seldom found at other festivals.
Making my way towards the sound of music and following thecrowds I noticed what must have been the ‘luxury campsite’ and began to wish Ihadn’t opted to use the day pass option. Tipi’s yurts and and camper-vans,visible through the tree’s, occupied a grassy verge and one couldn’t help butwonder at the kinds of luxurious interiors and facilities their occupantsenjoyed. I duly made a mental note to get myself one of these as my residenceof choice for next year.
This years diverse and varied lineup married the glamour andslick performance of some of popular musics biggest names, both past andpresent, with more home grown and even local talent, and did so with greatsuccess. Among the acts were long time Cornbury performer David Gray whosesaturday night headline slot had everyone singing along to his many hits.Westcoast songwriting legend Jackson headed up the main stage to close thefestival on the sunday night with a characteristically polished and familiarset. Newton Faulkner got his entire audience involved in musical pirate storiesand raucous Queen covers that saw them through the light rain that fell on thesunday afternoon, but it was the lesser known acts and local performers thatgave a refreshing edge to the weekends proceedings. Julia and Angus Young, abrother and sister folk duo from Australia, were ‘the find of the weekend’ forme and played a beautifully simple and engaging set on The River Stage. Julia’sencapsulating cover of the Grease classic ‘The one that I want’ was momentarilydisrupted by a frantic father who had lost his 3 year old daughter (Rosie), butwith a swift announcement from the band she was found in no time and the set(and song) continued.
As well as the three main stages, and the acts thatperformed on them to a crowd, were performances of a different kind. Wonderingabout the main arena, falafel in hand I heard what sounded like footsteps, butwith the echo of a tunnel! I turned to find a bow tied, bowler hat wearinggentleman walking along with a speaker (disguised as a suitcase). Peoples faceswould take on a confused expression and, as they turned, a sort of humorousacknowledgment. At one stall I spotted a man in a bright red suite, on thelargest stilts (presumably) I have ever seen, playing racket ball with a girlwho couldn’t have been older than four!
To my mind, perhaps the most striking and endearing featureof the weekend was the way that Cornbury seemed to attract all agegroups andbring them together, and do so with great style and comfort while retainingthat festival feeling. The main stage area was awash with families on picnicmats, grandparents with their grandchildren on their shoulders and childrenroaming freely, even as one got right up close to the guard rail. It was great,and very unusual, to see full families bridging the generational gap in thisway, at a rock festival!
Having been dubbed ‘poshstock’ by many critics, you wouldexpect Cornbury to deliver something a little more palatable than your averagefestival nosh of dodgy burgers and questionable kebabs, and so it delivered. Myfirst port of call, having underestimated packing time and consequently goingwithout breakfast, was Jamie Olivers’ new festival food experiment, ‘JamieOlivers’ Fabulous Feasts’. Served in a neat little cardboard container with afancy plastic fork my ‘proper sausage pappardelle’ was a great start to aweekend of decent wholesome food and good living, indicative of the kind offestival that Cornbury is and that many others are seeking to become.
The Pimms Bus was also in attendance with a steady flow ofsunburnt punters lining up outside its doors, as was a pristine white Waitrosetrailer serving an array of cocktails and champagne. When I set off in themorning for a festival I wasn’t envisaging a lunch of Pimms and fancy Italianpasta!
Having been once, and only experienced the day pass option,I can say that Cornbury is  definitelyworth trying out. If a grimy weekend of excess just doesn’t appeal, then thiscould be the festival for you. The food, setting, music and size of Cornburyall work together to make it an event that all members of the family can attendtogether and enjoy. A truly wonderful way to spend a sunny summer weekend.