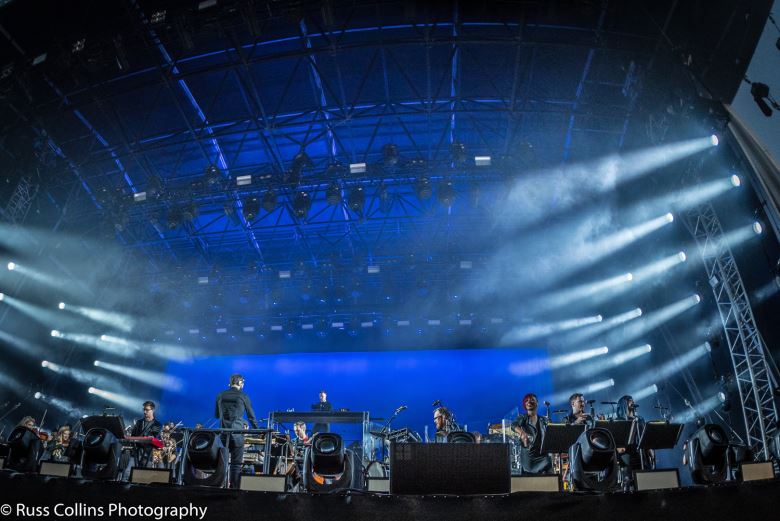 Common People is a family friendly 2 day event which has something for everyone and runs alongside Common People Oxford which happens at the same time, switching almost identical line-ups from each day.

If you have previously experienced the wonders of Bestival and Camp Bestival with its unrivalled atmosphere, euphoric décor and energetic vibe with attractions and food stalls on offer to suit every different taste (zebra burger anyone?) you would feel very much at home at Common People with the brands familiar trademark such as the iconic ‘world’s largest bouncy castle’, The Peoples front room – a tiny little venue in itself, vintage fun fair rides and the trademark patchwork flags make the layout indistinguishable from its bigger sister events in every way minus the camping element. It’s a tried and tested brand with the only difference for this one is you just have to travel or book some digs nearby if you want to go both days. Common people has three stages – The Common Stage, Uncommon Stage hosted by Joiners and the Uncontained Stage. Most of my review is focused on Common Stage acts as far too much to cover by one person at this event!

Attractions and things to do at common people are too vast to mention but it’s worth mentioning the family friendly aspect of this event that includes a feature packed kid’s area with big bears balloon disco, magic shows and a children’s talent show, not to forget to mention big top mania circus which includes circus workshops, hula hooping, juggling and acrobatic aerial trapeze acts.

Despite safety fears surrounding tragic recent events in the UK it was good to see that the festival organisers are taking this very seriously and security had been somewhat stepped up with increased perimeter security and an armed police presence and refreshing to see how the British spirit has not been broken as attendance was not affected in any way as peak attendance as 40,000 revellers attended for this year’s offering possibly making this the biggest ‘small’ festival in the south

I arrived just in time for Kassassin street a band hailing from Portsmouth who although only being around for 2 years are starting to make quite a name for themselves. A band of this calibre would sit much better in a later slot with a bigger crowd and I predict this is the future they have coming. If you haven’t heard them yet please check them out!

Other Saturday acts included the Dutch born grime/rap artist Stefflon Don whom is hailed as a British version of Nikki Minaj, and then there was Elvana – how do you describe this guy? He dresses up as Elvis and sings nirvana songs. I wasn’t sure what to expect but he was brilliant! Come as you are by Nirvana sung by a guy doing an Elvis impression. What more could you want! Next on was Becky Hill, an English singer and songwriter from Worcestershire who rose to fame after appearing on the first series of The Voice and is now a household name. She performed her hits false alarm, and after glow and is also incredibly photogenic as you’ll see in my gallery.

By the time Tom Odell bursts on to the stage with rapturous applause and screaming girls the sun was shining as he performed his hit song ‘I Know’  - I was wearing industrial earplugs their screams left my ears ringing like gongs. He’s one popular lad!

The legendary Sister Bliss played a DJ set to an almost full arena at the common stage. I wonder they like myself were secretly hoping the Maxi Jazz would emerge in a cloud of Dry ice and perform God is a DJ?? I waited and hoped, but alas it was not to be...

Saturday night closed with Pete Tong presents Ibiza Classics with the 65-piece Heritage Orchestra and there really are no words to describe just how epic this was. they have been on tour for a while now and this is the first time they have brought the event to a festival. Guest acts including Chicago House legend Jamie Principle and Ella Eyre who found fame with Rudimental and one of the most incredible laser shows I’ve ever seen at a British festival. Orchestral renditions from artists such as Fatboy Slim, Inner city and Robert miles concluding with another appearance from Becky Hill singing ‘You got the love’ an Absolutely mind-blowing end to Saturday.

I arrived on Sunday in time to see British rap artist Nadia Rose but she was running late, so we had the pleasure of local lad Callum Lintott getting a main stage upgrade immediately after his set on the uncommon stage.  Nadia finally turned up for a very short set before the black cat boppers hit the stage. Next acts were The Signals and the awesome Amy MacDonald who loved jibing at southerners running away from a few drops of rain but the truth was they were all at the uncontained stage for Fatman Scoop! See the gallery for the sheer size of the party going on there!. Back to the main stage for the house gospel choir “meet the choir that house built” is their motto and they are really quite epic!

British sea power and wildbeasts were next followed by a Groove Armada DJ set that got the crowd in the mood for the closing headline act - Kingston born grunge artist Sean Paul who performed hits such as Rockabye, Get Busy and Breathe. If there is one thing Sean Paul is good at is packing out an arena and Common People Southampton was no exception. My first time at this event and fully intend to be back next year!