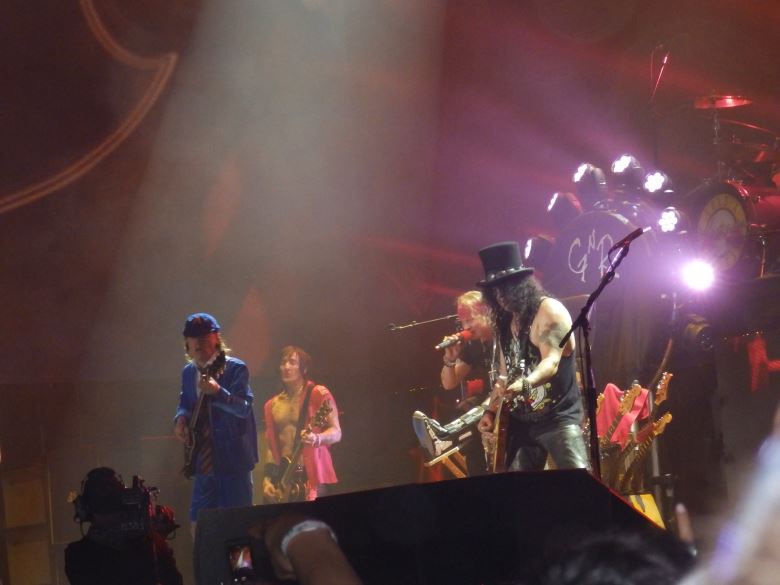 Coachella 2016: classic rock headliners, check; an abundance of electronic dance music, check; commoditised counterculture, definitely. I think I’m ok with this though, and so are the 80,000 plus people who are in attendance each day. After all this year’s Coachella line up brought us the much anticipated Guns N’ Roses semi-reunion combined with the comeback of New York’s LCD Soundsystem. Headlining duties were completed by the world’s highest-earning DJ: Calvin Harris.

Held at the Empire Polo Club in Indio, California, Coachella is a sea of narcissistic, selfie snapping, rich kids who seem to wear identical outfits dictated to them by H&M. The festival organisers have once again provided us with a genre spanning line-up that is heavier on quantity than quality. Electronic beats blast way, rappers rap and the occasional guitar based band weighs in. This all takes place in what can only be described as an extreme environment: the sun is blisteringly hot and the sandstorms that you endure can be unforgiving.

Pricing at the festival is extortionate, it costs $10 to drink a Heineken, so you can forget about drinking through the pain of listening to some of the acts. As for food, Coachella this year took pride in announcing an improved selection of festival food; however, the prices were again exorbitant.

Foals provided the crowds with a stunning set on the Friday, and should have been much higher up on the bill. They gave it their all with their sonically lush, and at times euphoric rock music.

The Last Shadow Puppets played the Mojave tent. The problem with Alex Turner and Miles Kane’s super duo is that the sum of the parts isn’t as good as the parts. The sound is very kitsch, and you can’t help but want Alex to rip into an Arctic Monkey’s riff.

M83 were unsuccessful in transitioning from a studio sound to a live act. It was a tepid display and confirmed that their music is better suited to TV commercials.

LCD Sound System closed out the Friday, and seemed to deserve their headline slot. Their performance of Yeah sending the crowd into frenzy.

Day 2 brought us Gary Clarke Jr, and his sublime guitar talents. It was a very polished set that animated the crowd with each note that he played as well as priming the audience for Saturday night’s headliner Guns N’ Roses.

Taking the stage at an unusually prompt time 3 out of 5 of the original Guns N’ Roses members took the stage. A bloated Axl Rose looked in pain whilst sat in his throne due to his broken metatarsal; Slash and Duff looked in much better shape. There is absolutely no question at all that these guys have still got it as performers. Despite looking a little worse for wear, Axl has maintained his voice and can still screech through the classics. Slash, as ever, made his guitar playing look effortless and treated us to his rendition of the Godfather theme. In true Coachella fashion, we were also granted a special guest: Angus Young came out to help the band play Whole Lotta Rosie and Riff Raff. Perhaps this was a favour for Axl, filling in for AC/DC as their vocalist, due to Brian Johnson’s hearing problems.  It’s hard to say whether the band gets on these days. There was little interaction between them throughout the set, and when the set finished it was left to the band’s more recent drummer Frank Ferrer to help Axl hobble off the stage. As an afterthought, Slash could see this and then returned to help Axl off stage, so maybe they’re friends after all.

By day 3 the Coachella crowd and prices really start to grate. You’d need a pretty big headliner to keep a real music lover captivated I’m talking resurrecting the 2 deceased Beatles and having a full on Beatle’s reunion.  So who did we have playing Sunday night? None other than the world’s biggest DJ: Calvin Harris. He seemed well suited to the Coachella crowd; his vacuous style of music is just the tonic they are looking for. It’s music that requires no thinking and appeals to the lowest common denominator. I heard that he pulled the biggest crowd of the weekend, which is indicative of the typical Coachella fan music taste. Fortunately, I didn’t hang around for his set; I decided to cut my losses and sell my wristband to an American who thought I was an Australian; I happen to be English. Dusting myself off from the Coachella sand, I headed off into the distance and got myself a nice steak dinner at a restaurant in Palm Springs. Reflecting on the demise of quality music at festivals, I promised myself that next year I’ll search out a festival that still values genuine talent.