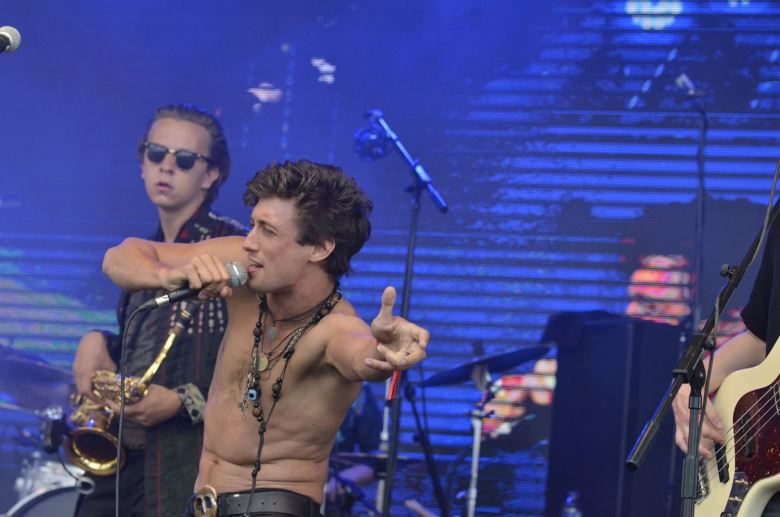 Beaming a self-satisfied smile across Dartmoor this weekend, was Chagstock festival celebrating 10 years in the business, and aside from a few refinements, it really doesn’t feel like much has changed since I came here for the first time 5 years ago, but then, as they say, if it aint broke... because aside from the internationally renowned list of artists and bands, punters that arrive from all over the UK, and the fact that it has consistently sold its 5000 tickets, it still feels like a community event, and you can feel that the people involved, and the Chagstock regulars are proud of what happens here.

But don’t let the laid back, nothin`s changed attitude fool you into thinking you`ll see more of the same each year, this is a festival with a wholly progressive booking programme, in the past I’ve seen some fantastic emerging talent, and this year was no exception, with acts like, Tankus The Henge, the funky rockin blues sound of The Marc O`reilly Band, Up Down Go Machine, and the Unique, hip hopera sound of Josephine and the Artizans all breathing a breath of fresh, sweet air to compliment the established acts that bring in the bread and butter audience.

Supporting Friday nights headliner Donovan, was the hard working Nottinghamshire Celtic punks Ferocious Dog. Who, with two albums under their belt and a third on its way, last year became the first independent band to ever sell out Rock city.

Donovan, the man they used to call the British Dylan back in the 60`s, the one who wrote and performed beautiful songs like catch the wind, Jenifer Juniper, Colours, and the psychedelic classics Mellow Yellow, Season of the Witch, and Sunshine Superman, and a genuinely fitting tag of.. plus many more, finished the night off. I was really looking forward to seeing him, he is one of the last of a breed that inspired a generation of songwriters we still enjoy today, and in his day, I’m sure he would’ve been the perfect finish to a brilliant day’s music, but after Ferocious Dog, and the Easy Star All Stars in the Marquee, he didn’t really manage to capture the moment, but as someone pointed out, even the real Dylan has his share of off nights!

I think it’s fair to say Chagstock is not an intense festival experience, and it’s one of the few festivals where you can see pretty much everything on offer musically, as the two main stages alternate, nice if you like everything, and it does also give everyone a chance to get to the front for their favourite bands, because the crowd is always shifting, and if you don’t like something, there’s fair selection of places to go, aside from the bar tent, a great range of food wagons, shopping stalls, or the live lounge, a small tent, with a modest PA and  entertainment ranging from a teenaged folk ensemble to electronica, and aside from being another little hidey hole from any weather extremes, it gives the more casual performer a chance to get up in front of an audience.

Saturday was fancy dress day, and the theme this year was Legends, which extended to David Bowie, Neptune, and Audrey Hepburn and a few that I wasn’t able to give a name to, but it all added to the fun atmosphere of the day.

Saturday nights main stage headline slots were filled with a couple of right legends. Same horse different Jockey was the slogan on the back of a Blockheads Tee shirt I saw among the crowd, brilliantly succinct in its reference to Ian Durys replacement, Derek “the Draw” Hussey, the new Jockey has turned out to be a champion. Brimming with confidence, Hussey, who is further authenticated for the role by having been Ian Durys aid and minder back in the heady days, is really making the old songs his own, well as writing new with Chas Jankel.  Fantastically tight, inventive and varied set of hits and new stuff.

While Danny & the champions of the World headlined the Marquee tent, The Stranglers followed the Blockheads on the mainstage in what was probably the best double of the year so far for me, I was so impressed by the Stranglers, as I had seen them just last week, and could have been forgiven for expecting the same list of songs, but, aside from the obligatory hits, it was a totally different set. A few people I met across the weekend had inferred scepticism regarding the absence of some original members, and I admit, you can’t simply brush aside the influence and the part that Hugh Cornwell played in writing and creating the legacy of 23 Chart singles, and 17 top 40 albums, but, to my mind, Ex Toy Dolls member and Stranglers Singer / guitarist since 2000, Baz Warne has the conviction and the talent that must surely convince even the most ardent Stranglers purist, he`s the real deal. Couple that with the magical blend of JJ Burnell`s awesome bass sound, and Dave Greenfields unmistakable keyboards, and I’d say the stranglers today are as good as ever they were.

I really can’t emphasise how chilled this festival is, plenty to keep the kids occupied, great bands all weekend, and some of the best scenery Dartmoor has to offer visible from all over the site, at times, it’s hard to imagine anything bad going on in the world outside.