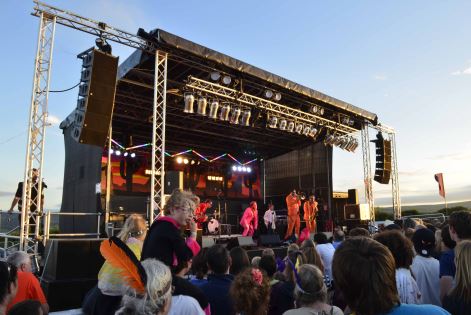 With temperatures predicted to reach a scorching 30c, and simultaneously hellish, heavy thunder storms forecast, things looked to be going one way for Chagstock festival this weekend, there were even rumours that the event had been cancelled because of this, but as I was informed by a local punter, “Dartmoor has its own weather system, so I wouldn’t take any notice of that!”, as it turns out, the sun beat the living daylights out of the site and the festival goers for most of the weekend.

The festival opens Friday afternoon, with bands scheduled to start at 5pm, but here at Chagstock, the garden party turned festival, I get the impression that it’s not about corporate precision, things will start when everybody’s good and ready, and this attitude sets the standard for one of the most laid back events of its kind you’re likely to encounter.

Last year this comparatively tiny festival delivered one of the highlights of my summer season, when the Boomtown rats, fronted by “Sir Bob” himself, played one of their only two live dates right here, that was a real coup and I was keen to see what surprises were waiting this year.

Friday night headliners on the main stage were the Lightening seeds, although they have plenty of hits to chose from, including a number one with Baddel & Skinner, they drew a big crowd, were well rehearsed and sounded great,  I’d have to say probably not the most charismatic, or lively performance of the weekend, this fact being highlighted further as they were preceded by Two Tone-tastic, 80s skankers the Selector, even if you hadn’t been there first time around, or had never heard the hits, this band were superbly tight, energetic and infectiously enjoyable, not to mention the classic tunes, very definitely one of the musical highlights of the weekend for me.

The music flips between the two main stages here and this seems to work well, the two can work in close proximity without sounds from one bleeding into the other, so there’s a really short walk between the two (ideal for the old, drunk or just lazy), and the people at the back for one band get a head start for the front at the next, and if you don’t like whats on at any particular time, theres the “live lounge” which offers a fantastic array of styles from comedy to jazz and all at a much lower volume than the main stages. There’s also the usual selection of craft, retro clothes, sweets and general tat to choose from along the shopping stalls.

Saturday mornings early risers may have caught the 1pm performance by Tantz, this is how they describe their music “a mix of power-klezmer with dub, hiphop and Balkan beats”, it was a truly fantastic shock to wake up to, full tilt for the entire set, these awesomely tight, inventive and brilliant performers had the crowd dancing off their hangovers in no time at all. Maybe im just of that age now where anyone under 30 looks like they should be in shorts and a school cap, but I really have no idea how these barely post pubescent protégés got so good so young, well worth checking out.

Saturday was also fancy dress day and this years theme was cowboys and Indians, a really good turn out of participants and there were some great outfits, I had particular admiration for the full Red Indian head dress wearers in the searing mid day temperatures, which had rendered me pretty much unable to do anything other than sit in the shade with a very reasonably priced pint and listen to music, not a bad way to spend the afternoon!

The day was packed with good quality music from the likes of Flight Brigade, Show of hands` front man Steve Knightly, the Moulettes, and supporting the main stage headliners the brilliant Babyhead who put on a real class performance.

Headlining the Saturday night were the Waterboys, this highly influential band, probably most famous for the 1985 single “the whole of the moon” have undergone many changes of style and persona through the years, but in one form or another, front man and singer Mike Scott has continued to write and release albums, so has a vast back catalogue of quality material to choose from and showed Chagstock why he’s still helping to sell out festivals after all these years.

Considering that this the third year in a row this festival has sold out, and with so many others popping up year on year, it is obvious that Chagstock is doing something right. Possibly because it really doesn’t seem to have strayed far from its roots as an overgrown party, its terrifically chilled, friendly, great for families, it’s far from over priced considering the quality of acts that play here, and it feels safe.

If you’re looking for all that in a festival, I’d book early for next year because my moneys on a fourth sell out.