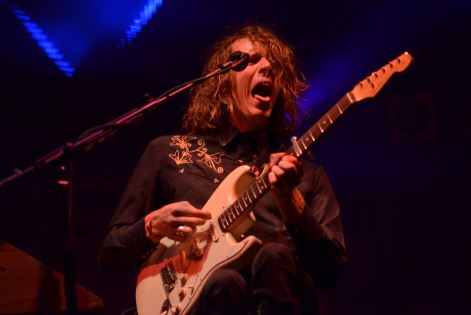 I could have gone to latitude this weekend, latitude is cool, or at least 6 music is cool and they haven’t stopped banging on about it for the past few weeks, I’m sure Latitude is amazing, but latitude costs 200 quid and many people just don’t have that kind of disposable cash, and although the bigger festivals have modern bands, isn’t it better to have fun than be cool? I don’t think it’s just my more frugal side working overtime? Maybe im claustrophobic about being in a big crowd, or maybe I just prefer these little places, and I know I wouldn’t be alone in that thought. I cant remember how many people I spoke to at Chagstock who said “I hope they don’t make it bigger, its just perfect”. But, It has sold out for the last 2 years and im sure the temptation would be there for many organisers to up the anti and go for broke, and unfortunately broke is exactly what happens to many who have tried, but the impression I got from everyone I spoke to from the Chagstock team is that there are no plans to increase the festival size, so settle easy people!

Set in some of the most beautiful countryside Britain has to offer, this is a two day festival, which may not satisfy the hardened festival-ite, but to be honest, for the average person this is plenty enough, time to see some great bands, meet new people, but not have to take part in an endurance test, or maybe you’re simply of that age where 4 or 5 days whooping it up has become a bit too much!

The music this year was as much a mixed bag as you would hope for, a little something for even the most small minded of punters. The first act I saw was Kathryn Roberts and Sean Lakeman, with the sun just starting to cool a little, and the back drop of Dartmoor, this foray into the world of Folk was just the perfect start to the weekend. The pace stepped up significantly when Ferocious Dog took to the Marquee stage. In the last two or three years they seem to have really taken off as a festival favourite, with their own brand of Celtic inspired punk they lifted the crowd ready for what was to be a very lively weekend musically.

Chagstock has two main stages and as one band finished another started 5 minutes later on the other, this works really well if you like everything that’s on offer, it probably works well for the bands too, who all get 45 minutes to set up and sound check and also don’t get a lesser crowd when there’s perhaps a bigger name on different stage.

There were also other places to be entertained, if you were looking for something slightly quieter, the Live lounge might have been what you needed, where a more acoustic sound was available, without the pressure for bands to make people dance, it gave musicians the opportunity to play something maybe a bit more off the wall or creative. This was where I caught the last two or three songs of a really tight, clever three piece called “Towma”, they clearly didn’t seem too bothered about sounding like anybody but themselves, brilliant harmonies and great songs with a tinge of humour. I would really like to hear more of theses guys.

You can of course sample the delights of the food vans at times when the music isn’t to your liking, or even if your’e just hungry, with every type of food available from an Indian takeaway to good old fashioned pie and mash, or you can do a bit of shopping around the various stalls.

The main beer tent seemed a bit undersized last year, but it worked much better this year, although maybe a little too well as with the heat of the weekend, by all accounts stocks were running dangerously low, luckily the Dartmoor brewery “Legend” ale wasn’t affected by the drought, so all was well…. for me.

This year saw the appearance of the “something else tea tent” at Chagstock, this little place seems to get around to more and more of the festivals I visit and provides an essential cup of tea and very interesting selection of cakes as well as the opportunity for people to get up and play on spec, often these people are acts from the main stages looking for somewhere to wind down after a frantic gig, always good fun, but you should be warned, these late evening sessions are often not somewhere you might want to take the kids!

Saturdays line up was another good variety of sounds from “Aurora skies” “Crowns” and “Dizraeli and the small Gods”, but the two main stage headline acts of the day were what most people were waiting for, firstly, Billy Bragg, songwriter extraordinaire, turned up with nothing more than an electric guitar for accompaniment and belted his way through a set of classics, looking confident and ultra sharp with beard and sunglasses, his voice was super powerful, aggressive, and still able to get his point across like no other, a good job since he has more points to get across than your average performer!

But the high point for me was the arrival of the Boomtown Rats, fronted by the legend that is Sir Bob Geldolf. 27 years after they last played together, all original members have decided to go back out and tour, this could surely go one of two ways, sad old men trying to re-capture the magic of youth, or re-establishing the brilliance that earned the band more top twenty hits than most bands at major festivals this year, including two number ones. Bob Geldolf is without doubt an icon, certainly from a musical point of view, one of the biggest names of the last 40 years, love him or hate him, he exudes passion in everything he has ever done and just to see him on the stage in front of me was enough, I was so hoping he wasn’t going to fail! But I think he’s probably intelligent enough to know the score and anything less than perfect wouldn’t have been worth taking out on the road. I never got to see them the first time round, but if they were half as good back in the day as they were at Chagstock then they would have deserved everything they achieved. Bob Geldolf in a silver snake skinned suit, skittered around the stage with a Jagger-esque prance, not showing the slightest sign of his years, delighting the crowd with a back catalogue of hits that left people with no doubt that The Boomtown Rats had more hits that “I don’t like Mondays”, the band was simply on fire and looked like they were enjoying every moment of it. With this being only one of two festivals the band are playing this year, I would say that the Boomtown rats were a very clever booking for Chagstock, and I don’t think there would be many that would disagree that this was a very successful booking too.

Realistically, with the weather we’ve had over the past few years, the sunshine of this summer would probably make breaking down on the side of the M5 a pleasurable experience, but it certainly helped make what is already a great festival simply stunning, everybody had a smile on, and for the first time in so long, nobody was going to be worried about getting their vehicle out at the end of the weekend!