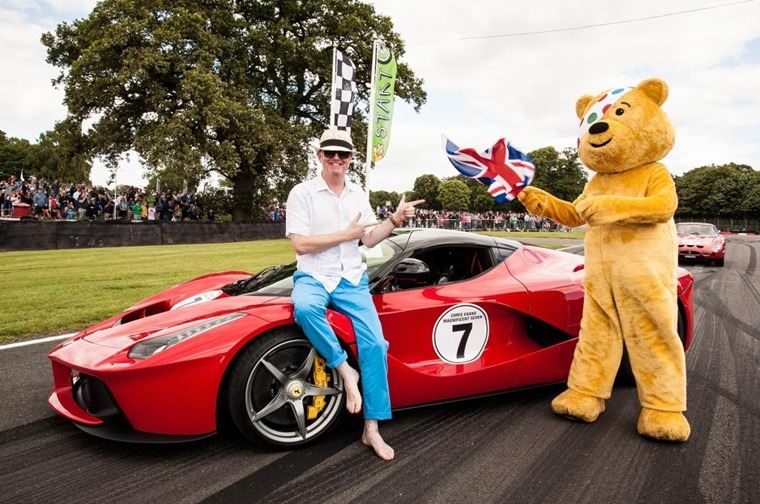 As Chris Evans watches The Corrs from his platform inbetween the two stages for all the crowd to see, I can't help thinking that Carfesters are currently witnessing what it meant to be a regular in 90's TV's favourite bar. Much like TFI, Carfest is another hit in the Evans' cannon, putting the energy of his on-air persona into a festival format. Carfest is in your face, it's non-stop entertainment but it's also welcoming and like bumping into an old friend on a Friday night. It's also everything Chris Evans' means to people with many in the audience growing up with Evans, and their kids now waking up to him on Radio 2. Evans knows his audience and his audience know him - married with Evans' longtime fascination with cars, once again he manages to satisfy his dedicated, infatuated audience.

While backstage I spoke with the Faithless icon Maxi Jazz, who told me that his favourite festival record was 'All Along the Watchtower'. I arrived the day after Faithless' Friday night performance, however it left such an impact on the Carfest crowds that punters were still talking about it at the end of the weekend, with many citing it as the musical highlight of their festival. Not only did the Carfesters I spoke to tell me how much they loved the music but they also had no complaints, which is incredibly rare to find at any festival.

Maxi told me that one of the most meaningful things about being famous for him is putting his message into his music and also the way music makes people come together. Which, despite many Carfesters not being regular festival-goers, was something I definitely saw.

The positive attitude of the perfomers and crew, and the punters considerate attitude towards each other was also mirrored by the profits going to a positive cause in the form of Children In Need. This really gives an amazing event, as Chris Evans perfectly puts it, 'a purpose'.

Other musical highpoints included the Kaiser Chiefs. Complete with mood-setting, irresistable anthemic hits such as the defiant 'I Predict A Riot', the undeniable 'Ruby', 'Oh My God', 'Everyday I Love You Less and Less', 'The Angry Mob', the nostalgic 'Coming Home' and the primal 'na-na-na-na-na' as well as frontman Ricky Wilson's charismatic energy and lovable on-stage banter, the set was the perfect fit for the Saturday night Carfest crowd.

The main stage was a source of non-stop seamless entertainment. Consisting of two stages, bands played without the wait between acts that festival-goers have become used to, with Chris Evans supplying 5 minute interludes summoning the TFI/Big Breakfast-energy that made him one of the most iconic, loved, pioneering, creative and notorious on-air personalities of the last two decades. While doing everything from (enthusiastically even if a little off-key) singing Queen's 'Don't Stop me Now' to hanging out with Pudsey.

Those looking for an alternative to the main stage action could venture into the more chilled Wig Wam stage which hosted emerging talent such as Anne-Maire Quinn, Katy Hurt and ¬¬¬¬¬Son of Jack.

A polarizing feature of any festival is it's food and Carfest got it just right by offering an affordable, diverse range of food outlets - I ate at the hotspot for hot, fresh, festival grub Eat Thai but places such as Oatopia, Urban Eat, Fordhall Farm, Pieminister and Old Fashioned Lemonade Co. among others were also on offer.

Despite the amazing musical and entertainment line-up for many Carfesters the attraction, as the name of the festival suggests, was of course the cars. From the world's fastest shed and the original Chitty Chitty Bang Bang car to five of Chris Evans' infamous personal collection, Carfest offered a unique take on the classic car show format.

One of the most vital things to the Carfest atmosphere was that it felt as if the festival had been designed for families. The main arena was surrounded by screens which was helpful to those who had that familiar feeling of only being able to watch a few songs of a band's set before having to see to their kid, as they could watch the rest of the set on one of the many screens while entertaining their children. One couple triumphantly told me their toddler hadn't cried once with a look of a relief on their faces. Due to the majority of the crowd seeming to be mostly made up of families, this meant that the Carfesters themselves created the perfect friendly family atmosphere which was welcoming, understanding, enticing, accommodating and entertaining for children as well as their acompaning adults.

Other stand-out musical moments came in the form of KT Tunstall's flawless performance and the pure class of Bryan Adams' closing set. As his classic songwriting force shone through and the sun set over the stunning Bolesworth castle site. Carfest found a home in it's new site.