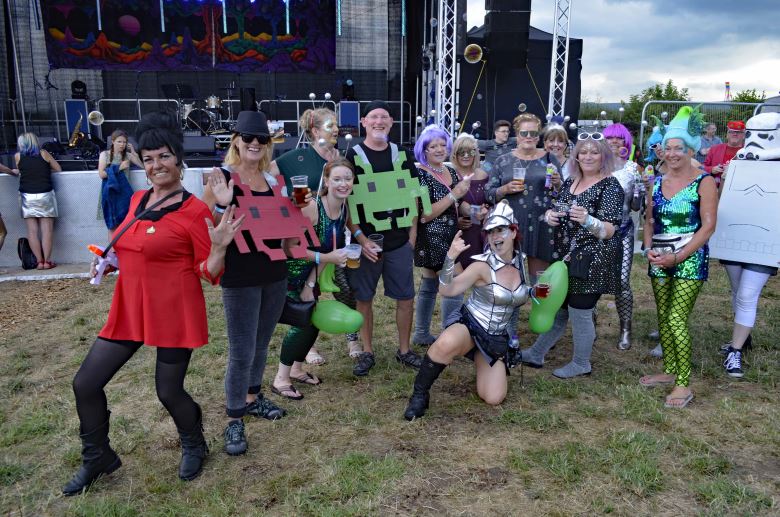 Wow, a one word summary of another excellent year at Camp Bestival. For the lucky peeps who brought tickets to this years Camp Bestival were once again in for a shockingly good event, closing in Camp Bestival's legendary fireworks display. For those of you who haven't been before, camp Bestival is a smaller spin-off of Rob Da Bank's Bestival normally held on the Isle of Wight – however with more of a family focus. This years concert rejoiced in a circus theme as revellers attended, with kids learning Diablo's and playing across the beautiful scenic background of Lulworth Castle. The event targets a rather mixed audience and certainly attracts a very relaxed and party going crowd up for some awesome music & fun as the sun settles other one of England’s most scenic backdrops. I went this year with my husband and we enjoyed another year of family orientated fun at Rob Da Banks legendary event with an awesome headlining act of Basement Jaxx.

The fields of Lulworth are taken over by campers for a brief 3-4 days as a sea of tents and people from all walks of life, covered in neon face-paint, dressed as clowns and enjoying the amazing variety of food available, enough to have the most fussy children easily full up! The music is no let down either with some incredible acts, such as the legendary Basement Jaxx, De La Soul, Chas & Dave, Sophie Ellis Bexter (who's closing set of pop favourites had the crowd lifted). Comedy and family entertainment certainly wasn't in small quantities either, with Milton Jones and his legendary one-liners filling the Big Top in minutes with a sea of laughter. Family favourites such as Michaela Strachan's Really Wild Adventures saw the same children who watched her on TV bringing their children to revel in the same adventures and learn about wildlife. This year also saw the arrival of the very popular Skylanders tournament tent – an instant hit with kids who could be heard from way outside of the designated area with shouts of laughter and fun. In addition to these there were other 100 free activities advertised that kids could do, everything from hunt for the animals to slides and play equipment, inflatable weddings for adults to fancy dress everywhere – it is very difficult not to get swept up in the fun!

The climax of Camp Bestival each year is normally a very famous act followed by a fireworks treat. This year was no exception as Basement Jaxx opened with a tremendous crowd pleaser to a completely packed field. Everyone was clearly waiting for one of the two classics and when 'Where's your head at' and 'Romeo' played, the atmosphere was at its most mad! As a large robot and squirrel danced around on stage in absolute madness, the entire field pulsated with both excited adults and their children, it was an amazing sight and memorable at any age. The final close was a fireworks display, which disappointingly didn't use Rob Da Bank's famous Camp Bestival Projection Mapping Animation on the castle – and instead this year opted for just fireworks. Despite an initial disappointment on the climatic close of this year's event, the Fireworks were some of the best we had ever seen, second only to Sydney at New Year. The incredible soundtrack of Queen to choreographed Fireworks was simply enough to draw a tear as everyone just watched in amazement – it was simply beautiful. Just so you know …. tickets are available for 2015 – get yours now!

Published on 12 August 2014 by darraScott Photography