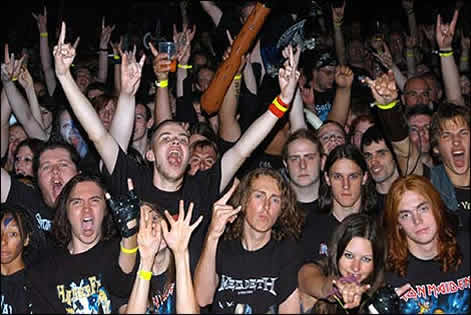 Having driven there on previous years, this time I took the train. Leaving from London Euston to Lichfield, and from there catching a shuttle bus straight to the festival`s front door proved a very easy and effective way of transport, but I must admit I`m one who doesn`t carry more than necessary - On my back, a small backpack with all my clothes. Some beers, tent, air mattress, sleeping bag... These were delivered to me on site by friends who drove there.  There is also a big Tesco at walking distance, so there is no need for carrying heavy crates of beer from home!
It is a short walk from the festival main entrance to its main campsite, which has some food stalls, drinking water and toilet facilities, and a shower truck at £3 a go, which I found worth it. Finding a good spot for your tent is an easy task. That done, due to the friendly small size of the festival, walking back and forth to the arena is no great mission, and allows you to be there on time to watch the bands you like in no more than 5, 10 minutes, and to go back to the tent for some rest, some food, have a few drinks, retouch your make up (not me!), etc. while a band you don`t want to watch is playing, or even in the (average 35 minutes) gap between main stage bands.
This year’s line-up was pretty alright to my taste, and well worth the £105 price tag.  There was something for all tastes. Headliners WASP, Immortal and Motorhead, as well as bands like Morbid Angel, Kreator, Exodus, Hammerfall, Devin Townsend, Therion, Finntroll, Wintersun, Grave Digger, among so many others, delivered as expected and kept a smile if not in the faces, at least in the minds of all of us evil metalheads. In my opinion a very small problem, Motorhead had their set cut short by reasons unknown. And I would raise my beer to Angel Witch, headlining the second stage on Saturday, putting on a great show, entertaining and probably surprising the ones that only knew of them by their self titled song, which they played to an out-loud singing crowd.
The arena size and layout were the same as in previous years, which I consider a plus. The size of the main stage, as well as the space for the crowd are very fitting, with the other two smaller stages to each side, within easy access and short distances, but without interfering on one another`s sound. There are food and drinks stalls all around, the bar, the fun fair with its nice lights and smoke effects, the bumper cars and other rides, a small corded field for some Viking and Medieval fights, a signing tent in which you have the chance to meet many of the bands, as well as the usual metal market, selling everything from band t-shirts and accessories, to funny hats and glasses, masks, helmets, fancy dresses... In short, all of those silly things we tend to think it`s the best buy ever when we are a little tipsy.
For me, the big downside of this, and other English festivals I have been to on this and on previous years, was the beer. I know it goes with sponsorship and etc, but I simply cannot down 3.8% Carlsberg on a paper cup for £3.80 a pint.
I also think that for the cosy atmosphere, the size of the festival and its ticket price, the official merchandising should be sold for less than the £20 they charge. Something like £15-17 would be more fitting, and make people feel more like they are part of the festival as a family, and not as mere costumers and consumers.  Other than that, there is nothing else I could complain of.

The weather was pretty good, beating the mostly rainy forecast we all had checked. It also couldn`t pass unnoticed the large number of families/kids present. I have seen some of the sweetest young kids rocking out to the bands, most of them correctly wearing their earplugs, and it was funny to watch that no one, no matter how badass they were or tried to be, could walk past without giving out a smile or stopping to look at them enjoying themselves. I bet most boyfriends and husbands walking past them had their girlfriends and wives asking them the "can we have one toooo?" phrase!
In short: Great festival, great weekend, fully packed with good times and nice new friends. Cannot wait for next year, cleverly postponed by a week not to clash with the last week of the Olympics.

Published on 16 August 2011 by sepultallica