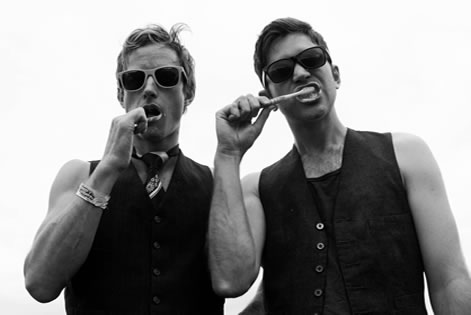 Thanks to bleak weather forecast and an ominous last minute dash from organisers to give away free tickets, anticipation for the weekend was muted.

On first arrival, the site in Ware, Hertfordshire, was uninspiring. Surprisingly small and flecked with plain, white marquees better suited to your uncle's wedding, first thoughts were, is this it? Just a few hours later, after stumbling across prolific pockets of mischief and merriment, it was repeatedly announced "the best of the summer".

Opening the main stage were winners of competition Road to Standon. After hundreds of entries, a series of heats and a final judged by an industry panel, standard was high and curiosities roused. Experimental indie band Citizens launched onto the stage, with blossoming guitars underpinning the beautiful haunting voice of frontman Matt West.

At dusk, the energy began to bubble. Hoards of gods and monsters emerged, running amok in the labyrinth.  Hide-holes and hidden arches led to party venues from the epic to the bizarre. A doorway led to a vast dancefloor; where contorted monster faces bounced into the air: flashes of pink faux fur, flickering fairy lights and the twirls of snakes amid a luminous Medusa wig. Through the crowd trailed a Loch Ness Monster chain twelve people long.

It has been said many times before, but it really was the crowd that made it special. Boy, do these people know how to party. Two girls no older than eight pulled moves that would make Beyonce proud and a bejewelled elderly gentleman wearing a three piece suit complete with dickie bow and top hat was still having it at dawn.  There was not one ounce of trouble - although one witty lad dressed as a looter hauled round a wide screen TV box all weekend - and a friend’s handbag duly got handed in at the bar having been momentarily abandoned.

After founder Alex Trenchard had been jailed earlier in the year and top act Spiritualized had pulled out last minute, the event had suffered some bad press. Yet organisers had pulled out all the stops to delight attendees.  Daytimes could be spent swimming or supping pimms on the lawn and evenings jigging to gypsy swing. Whilst at night the chaos roared with choices of stomping grounds including the Cow Shed and the Horse Box.  The line-up, although predominantly up and coming acts, got nods of approval from most music elitists.

The Raghu Dixit Project, described by a member of the crowd as 'three chubby Indian blokes" as she declared them the highlight of the festival, roused the crowd to near hysteria. Their mood was infectious, with an act stuffed with witty one liners and chuckles that wouldn't look out of place on a Father Christmas.  But it was their contemporary Indian folk that brought everyone to their feet, culminating in their request for the audience to attempt a "traditional Indian dance that takes years to master". In fact, the dance required everyone to jump up and down as if on a pogo stick. In seconds the audience became a sea of jack in the boxes, boisterously careering into each other with smiles wide.

On Saturday night Saul Williams had to fight for attention after being upstaged by the previous man to take the microphone. Looking a little nervous, Steve Melville had proposed to Karina, who squirmed her appreciation, toying the ground with the tip of her boot. Minutes later he joined his still blushing bride-to-be and adorned her finger with the ring. The audience’s collective sigh of endearment was still ebbing as Williams began his heavy, pounding monologue. The dark power rock struggled to engage the majority of the blissful crowd who were strewn across the grass enjoying the afternoon sun.

Headliner Lamb were uninspiring. Their set failed to grip the crowd’s attention, seeming outdated and flat. People meandered off from the main stage, and those making the right choice headed straight to the Cow Shed.  There, Hercules and the Love Affair dominated the stage with their heavily tongue in cheek glamour dance.  Drag queen divas ricocheted operative voices as lasers scattered across an aghast crowd embraced by colour and vibrance.

Minutes after they had finished and while still catching my breath, a man approached and beckoned me to follow. Adorning a pair of silver sequined leggings topped with a fur coat and accessorised with pink sweat socks and matching head band, the effect was glitterati 80s pimp. He disappeared through a cubbyhole in the wall before reaching his hands back out to pull me through. Headfirst I tumbled in to collapse in a soft play room complete with space hoppers. It was here that he greeted me with his story, told with ferocious enthusiasm….

Head over heels for Hercules and the Love Affair, he had made a sneaky attempt to get backstage. Burrowing under the marquee fabric and scooting along on his haunches, he had soon been caught by security. In a last ditch attempt, he claimed he was from Time Out and begged for a review. The lie was screamingly apparent. Eyeing him suspiciously, the security ordered him to be escorted from the area and my story-teller had followed them defeated. But with a mischievous wink, the security walked him straight passed the open-door of the band’s tour bus.  Seeking his chance he leapt into their laps, arms wide, head colliding with faux bosoms. "We love you too", Hercules cried, smothering him in a group hug.

Sunday night came too quick. Legs were tired and moods struggled to maintain their euphoria. Luckily DJs had the antidote: cheesy 80s power ballads.  From Whitney Houston to Toto, the crowd became a high fiving, drink spilling chorus with their arms in the air.  The time for the music to be cut came and went as security unsuccessfully tried to end proceedings, each time being swayed by an adamant, greedy crowd and the beats of another classic that even had their hips swaying. Finally, it drew to a close with Bugsy Malone's megamix, a clichéd climax that was deflating yet tender.

As the crowd wandered back to their tents, huddles were already talking of reunions next year. Same time, same place.