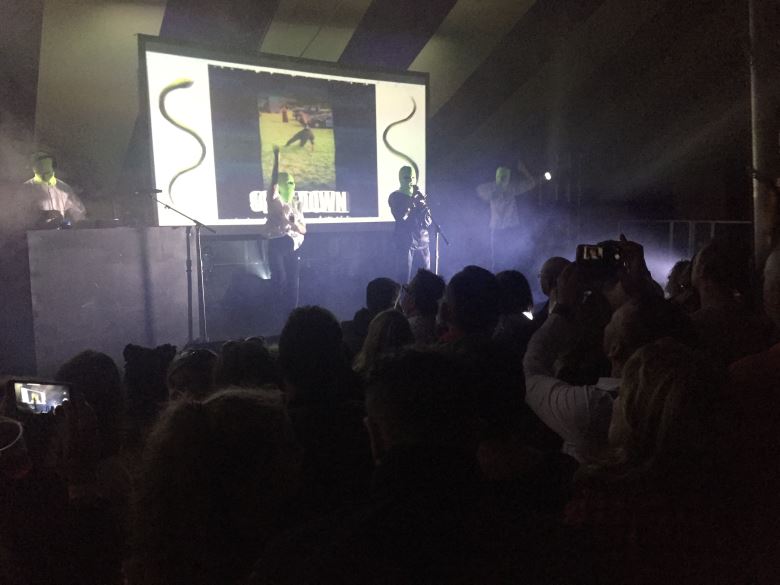 As they say in Italy, my head feels like a balloon. Two days on from Byline Fest (sited in the stunningly beautiful Sussex bush…okay Ashdown Forest, but bush is more amusing, aka childish, in the headline) the debate about modern slavery is still unsettling me, and this morning over my café breakfast I had a long discussion with a complete stranger about collusion, Islamophobia, the demise of neo-liberalism and the rise of fascism. What’s going on?

Byline is a very different kind of festival, not the usual hang out, chill out and freak out kind of a thing, but instead a thought provoking, challenging, mind expanding, mind altering, mind boggling, long weekend of extraordinary people and weighty debates, intense emotion and, yes, a fair bit of music. I loved it, albeit I need some soothing therapy to help me to integrate all the disquieting information I imbibed. Makes a change from other substances I suppose.

This festival will wake you up and shake you up. It’ll challenge, inform and very likely radically change the way you see the world. I found it uncomfortable at times, but thrillingly so. It sounds somewhat overblown to say it I know, but Byline is an important festival and potentially a significant driver of the upswell of grass roots change we so desperately need to see in the UK and across the globe.

This was only Byline’s second year and there was very much a sense of it still finding its feet. Let’s get the music done with first – the line up was impressive if you have a taste for punk/post punk bands such as The Vapors, The Members, Badly Drawn Boy, The Blow Monkeys, Courtesans, Seething Akira and a whole load of other noisy notables. As it happens I do have an occasional taste for this sort of thing, but overall I would have preferred a somewhat softer and more contemporary musical yang to complement the high intensity yin of all the intellectual and emotional debate.

There is though one massive exception to this: high tempo, theatrical, lurid green balaclava-ed, kick ass feminist anarchist techno-punk super heroes Pussy Riot were incredible, amazing, extraordinary, fantastic and wonderful. I swoon…this is my sort of girl band, authentic girl power at it’s courageous best. Rumour has it they’re coming back next year (early bird tickets for the whole weekend are already available for only £48 I’m told).

There was comedy to be had too, none of which I managed to catch unfortunately as I could have done with some levity, and poetry, some of which I did catch and wasn’t totally convinced, and late night dancing and, well, all sorts of other shenanigans, but the real grist of the festival was found in its many debates. The variety and standard were exceptional, with numerous top journalists and notable social and political commentators in attendance, as well as celebrities including John Cleese (I can happily report that he is still funny if a little old school in some of his attitudes), Alexei Sayle, Joanna Scanlan and, remarkably, Gary Lineker.  The latter’s interview was, sadly, something of a fluffed open goal as his surprisingly evolved political and social views were not explored in any depth. Time was even wasted – highly unnecessarily given the nature of the festival and the availability of copious YouTube clips – chatting about his football career. A shame as the man has a lot of popular influence.

I felt I only scratched the surface with the debates. I went to a fair few but there’s only so much you can take in. In particular those on collusion and investigative journalism, Islamophobia, modern slavery, whistleblowing, Silicon Valley, and press ownership and funding, stood out for me. Best of all was a Guantanamo Bay internee chatting with three civil rights lawyers, including one who eventually got him released. It was nothing short of mesmerising.

Unfortunately the Sunday was marred somewhat by an all day biblical grade rainstorm, I guess god must have mixed feelings about the Leveson inquiry and cyber security, but even this deluge wasn’t enough to significantly derail the quality, depth and intrigue of the day’s many discussion highlights.

There are inevitably a few ‘even better ifs’, including: the loos weren’t cleaned often enough (nothing new at a festival, but…); there could have been more activities provided for kids (there were bits and pieces for them to do and a weekend running wild in the forest is pretty good of itself, but as it stands it didn’t feel like a particularly good festival for them to me); but most of all there needs to be more provided as an antidote to the at times intellectually and emotionally overwhelming debates. How about a dedicated positive news tent for example (perhaps hosted by the online newspaper of this name), combined ideally with an extended comedy line up? It’d be a great place to go and chill, rebalance and recharge before reentering the hurly burly of the uber serious stuff.

I have no significant complaints though. Byline is already a great little festival and I strongly suspect it’ll become even better (and bigger) over the coming years. Okay, as the one of the urbane organisers inadvertently more or less said, at times it feels as much like a conference as a festival, but hey it’s a hybrid and it’s an exceptional one at that. It packs one hell of a punch, it’s important, go along next year and be the change you wish to see in the world.