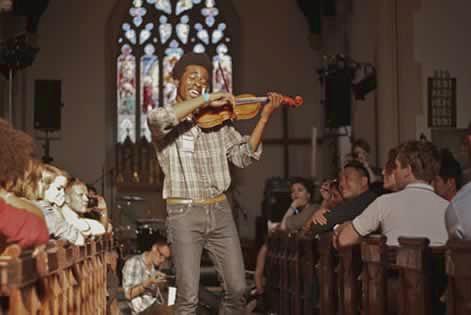 Slightly suspicious of anything in London calling itself a festival I braved the 'engineering works' underground for Bushstock. Spread across four venues in Shepherds Bush I was wondering how it could come together. Any concerns I had evaporated as soon as I got to St Stephens Church as I was completely blown away by the music and the singing. At such close quarters you get a real feel for the artists and their songs especially in St Stephens where performers were lit by the setting sun through stained glass windows and the acoustics amaze.
The church was the perfect setting for The Staves whose heart rending vocals echoed around the aisles astounding the audience. The almost medieval surroundings allowed the unplugged ingenuity of Marques Toliver to shine, albeit not quite as brightly as the blinding sunlight streaming upon him and his violin. King Charles reigned supreme in the pews winning his subjects with wit and feeling.
Over at the Goldhawke a sunny friendly pub and the smallest of the venues there was a laid back atmosphere and we were right by the stage for Louise and the Pins strolling rhythms and pretty country inspired songs. All the acts so far had been brilliant so I did not mind where I went, knowing it would all be good I headed off to check out Shepherds Bar and arrived in time for Lucy Rose. Definitely one to watch out for in the future she has great personality on stage and through her songs, sung beautifully and accompanied by haunting strings and an at times slightly calypso beat. Lots of us wanted to dance but by now the bar floor was littered by casualties of a day out drinking and having nowhere to sit in this full up venue they had taken to the floor.
The Tree Top Flyers flew through their set but the volume was ear splittingly loud so I could not hear a word of the lyrics which made for a great but long instrumental. Noting the queue to get back in as I left to find Ginlik I couldn't help but wonder if queuing on the streets of London might somewhat spoil that festival feeling. I lost the festival feeling anyway wandering around looking for Ginlik which is a great venue in an old public loo but actually underground and unsignposted when coming from the Shepherds bar - mobile internet to the rescue! Peggy Sue had filled the venue and everyone was up and dancing, another polished performance with beautiful vocals but at the end of the day, literally, I had heard a few similar acts already. Safe to say one of next big acts is going to be one with female vocal harmonies though which one will get there first is anybody’s guess, they are all deserving but my money would be on The Staves.
Heading back to Shepherds Bar for the Guillemots a personal favourite, I was pleased that I didn't have to queue but disappointed with the sound quality in the venue, overwhelming near the stage and slightly tinny at the back. I was glad that Guillemots picked up the pace though people were finally dancing and jumping around, always the best way to end a festival, I had wanted to dance in the aisles at St Stephens but rapturous applause had had to do.
What a brilliant idea to use such different venues within walking distance to host what should become a must see event on London’s calendar. Between venues there are the endless eateries, bars and pubs of Shepherds Bush for respite which is needed because apart from the pews of St Stephens you will be lucky to get a seat. St Stephens was my favorite venue by a long way, the danger with the other venues is that they are some of the thousands of pubs/clubs/bars in London where you can listen to music on a Saturday night. But it is the music of Bushstock that really stands out and will set this night apart from others in London. I would definitely come back to this festival considering the standard of the acts though I would have liked to have seen all of them!
This is a festival to lose yourself in the music and proof that London can host a festival in the city. The only downside was that we were mostly inside on a perfect summer’s day, the hope would be that Bushstock could warm a wet winter weekend as well as cool a hot summer’s day and provide twice the fun with or without the sun.