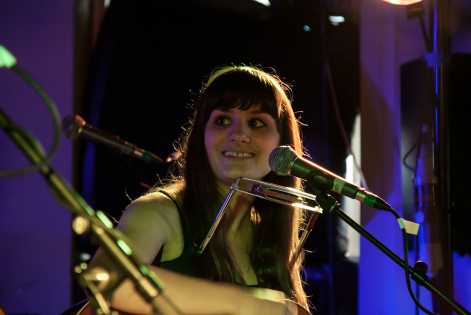 Shepherd's Bush: A Bank Holiday is always a risky time to plan an event in London. Not only because numbers may be artificially low, but also due to the curse of the British weather, in which any planned event will automatically be deluged when the previous weekend will have been gorgeous. So pity the organisers of Bushstock, who dared to tempt the rain gods by organising their four-venue festival dotted around London's Shepherd's Bush on Jubilee weekend. But, for the most part, it stayed pretty dry, and this mini-festival, started in 2011 by the promoters and record label Communion, was well-attended without ever feeling crushed.

First up for me was the singer songwriter Mahalia, who delivered heartfelt lyrics to an enthusiastic audience in St Stephen's Church. She has a good voice, and the backing band, restricted though it was to an acoustic guitar and laid-back bongo playing, blended well, particularly on a cover of Mardy Bum by the Arctic Monkeys. The lyrics were given plenty of room to breathe and she sang with palpable conviction. But I wasn't too sure about the heavy urban accent – it all felt a bit too Kate Nash – and the arrangements were a little too obvious. She has talent, so I hope she finds a way of singing her way out of the musical corner she has backed herself into.

Finding some musical space to call his own is not a problem suffered by Nick Mulvey, formerly of Mercury Music Prize-nominated band Portico Quartet. Since going solo and returning to his first instrument, the guitar, he has let his self-taught and entirely hypnotic playing style come to the fore. Fusing elements of folk, classical and Latin, he plays beautifully intricate melodies, and his strong, clear voice floats seamlessly over the top. Nick's lyrics were fresh, thought-provoking and unafraid to mix powerful emotions with whimsical childhood references, all to great effect, particularly on the barnstorming finale Cucurucu. That the church was packed out was not a surprise, given the immense talent of this sensitive and utterly absorbing singer songwriter, although it was interesting that at least 80% of his audience were female. That aside, Nick is a brilliant artist, and if you don't know him already from his solo or previous work, I suggest you check him out.

By the time I arrived at Shepherd's Bar, tucked into the ground floor of a fairly anonymous looking block of office and studios, the sun was out, and I was ready to loosen into party mode. As fate would have it, the next act to take the stage was Juan Zelada, a Spanish singer who had a six-piece backing band that incorporated brass alongside the usual rock combo. There was nothing particularly different in the Latin-infused-via-New-Orleans sound, and the playing, while well-drilled and pacy, lacked a certain something. That the gig was a hit with the crowd was largely down to the charismatic Juan, who quickly got the audience singing and dancing along. The music was right for a lazy summer Saturday when we all wished it was warmer and the bar was next to the beach. I just can't quite imagine wanting to listen to it at any other time.

Something much more compelling was on offer from Ellen & The Escapades, an acoustic pop/rock band from Leeds whose first album All The Crooked Scenes was released in April. Musically, the time was the 1970s, and the place was somewhere between Countryville and Rock City. It was all very Fleetwood Mac and Joni Mitchell, which occasionally meant that Ellen et al sounded a little obvious, but most often resulted in strong, thoughtful, soulful rock, with an accomplished and confident sound. Ellen has an easy, intimate voice, with a lovely rasp, which I imagined would be overpowered by the band in the louder moments, but she managed always to keep her presence, and it all combined to create uplifting music with a slightly sad undertow. Although they follow the traditions of 1970s folk-infused rock, Ellen & The Escapades have managed to beat their own path, and I suspect they will find it a fertile patch for some time to come.

Fifth band, third venue. This time, the outfit were Amber States and the tiny stage of the underground Ginglik was where they powered their way through a series of pastoral rock numbers, making short work of their allotted half hour. The sound was mature and muscular, but lent enough of a subtle edge by finely played cello and muted keyboards. The lead singer has a rough edge to his voice that reminded me of a young Rod Stewart, although I don't see him donning ball-hugging leopard print trousers any time soon. At times, Amber States were quite wistful and romantic, rising and falling expertly through the emotions, and others they caught you by the throat. Overall, if their recently released EP is anything as good as their live performances, their already strong following will surely only get stronger.

You can't buy that kind support, of course, but the band to take the stage next at the Defectors Weld might suggest other things can be purchased. Let's Buy Happiness are an alt-rock band whose sound is rooted in post-punk. Maybe they were having an off night, but this technically proficient band aren't particularly inventive or compelling. The songs apparently had drive and dynamism, in that they got loud and soft, fast and slow, and all the boxes were ticked, but it didn't really amount to much. Lead singer Sarah Hall has a decent enough voice, but she doesn't sing in a way that makes you want to listen to the lyrics, or become lost in the emotion she is(n't) projecting. The band seemed uninterested in the audience and didn't really try and connect with them. I can see why this band, who are decent enough, have supported so many bigger name acts, including Idlewild, The Temper Trap and The Futureheads, but I can't see them doing much more than that.

In contrast, south London band Bastille, who followed them onto the Defectors stage, were pretty much the real deal, almost fully formed for the big time, whatever that will turn out to mean. They produced a string of heartfelt, passionate, catchy instant classics, heavily laden with chants, strong percussion, and swelling keyboards, all with a dance sensibility that instantly lifted the audience into the palm of their collective hand, so to speak. And through it all, there were thoughtful, memorable lyrics to keep the interest, and the mind, ticking over. Dan Smith makes a funny, engaging and self-deprecating frontman who is quite content to pull aside the veil between performer and audience. Plus, he has enough levity to sport the same hairstyle as that on his Eraserhead t-shirt. That impish attitude clearly underpinned their choice of covers, including Corona's Rhythm Of The Night, and by the time they finished their set, the cheering crowd demanded an encore, which was apparently unexpected by the band, who did a good performance of a rarely played track. If I have a complaint, it is that Bastille's songs can end up sounding a little too similar, and the big emotional numbers can end up as a sort-of Keane-meets-Vampire Weekend pastiche. Dan also needs to work on varying his vocal line a little more, and avoiding using the same swoops and chants on too many tracks. But all in all, it is perfectly clear why Bastille were signed to Virgin by EMI late last year, and they were a fitting end to a great day, in which Bushstock served up the perfect bite-size festival to create music snacking at its finest.