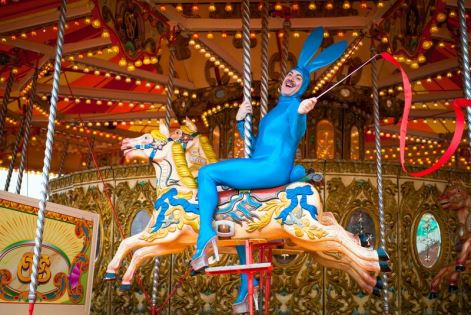 With their infinitely diverse range of acts it’s no surprise that both Brighton and the Brighton Fringe Festivals continue to grow from strength to strength every year. Running from 4th – 26th May, Brighton Festival has been described by the Guardian as, ‘the defining moment in the Festival year’ and that is not without good reason. First held in 1967, hosting such performers as Lawrence Olivier and Anthony Hopkins, the festival has continued to expand and blossom into the largest art festival in the UK featuring the eclectic, cultural melting-pot of idealistic styling we see laid before us in 2013.

During the festival season, the town is awash with music, dance, visual arts and outdoor spectacles. Walking through the streets is like swimming amid a sea of acts, art and theatre, so my advice, upon arrival, would be to spend some time bimbling through the Lanes taking it all in. It was, on one of these lazy walks through town, that I discovered a gem which otherwise would have gone totally unnoticed, a band under the name of ‘The Top Bananas’. Usually a five piece band, their busking outfit today consisted of two men, one singing and sporting a guitar, the other slapping the hell out of an un-amplified double bass. They covered a range of songs including; Greased Lightening, Hit the Road Jack, No Limit, Ignition (at the request of someone in the crowd) and finishing with a interesting take on the timeless classic: Itsy Bitsy Yellow Polka Dot Bikini, merging seamlessly into croons of ‘Just oooone Cornettoooo’ and the Go Compare advert. Their highly improvised and cheeky, crowd pleasing style was a massive hit, drawing in a large crowd who gathered in front of them on Church Street. 10/10 for entertainment and foot stomping value. With the pace and the relentlessness of their cover set list, once you’re caught listening you won’t be able to leave before the final song.

Next on my hit list was Lucinda Williams. All the way from the States, the crowd is promised an ‘Intimate Evening’ with the artist, whose voice has been likened to ‘bourbon poured over broken glass’ and I for one, was not disappointed. Having been persuaded by a friend to go for ‘just one drink’ at MyHotel, a cocktail bar not far from Brighton Dome, I am slightly ashamed to say we stumbled in a little late for the performance. Whilst we were taking our seats, Lucinda made the transition from her song Pineola to the Jackson. Now, if Lucinda’s voice were bourbon, I would liken the reaction of the crowd to ice rather than glass, melting in the palm of her hand between soulful, country guitar licks and meaningful lyrics. An elderly lady sitting next to me couldn’t help but move around in her seat to the rhythm as the rest of the audience looked on seemingly lost in the act. Lucinda Williams, a class act, she oozes cool. A truly prolific songwriter, especially for those like myself, who love the element of storytelling within their music

However, when it comes to style, circus and acts of a truly spectacular nature, one need look no further than the Spiegeltent, located at Old Stein, Brighton. Upon entering The Famous Spiegel Garden, my eyes were drawn to the Aperol Spritz bar with its army of orange clad bar staff, the uniforms of which matched the orange and white décor which, in turn, complemented the bright orange drinks served within the tent! The Spiegel Garden is an eye catching wonderland ready to tantalize your taste buds, seduce your lug ‘ols and entice your eyes. The acts within this venue, such as the famous Bullet Catch, are fittingly as fantastical as their setting, displaying performances of caberet, burlesque, circus and magic, a true bewitchment of the senses. Due to the recommendation of a friend, I had the fortune of witnessing the wonderful spectacle that is La Clique which turned out to be the high light of my festival experience hands down. It is no surprise that this beautiful band of wildly talented reprobates has an impressive back catalogue of awards under their belt, including an Oliver, and has been touring a whole range of venues throughout London, New York,

Paris, Sydney and Montreal. The stage, set in the middle of the room with the audience circled around it, gives the impression of a circus with ‘Rubberband Boy’ Shay Horay as the ring master introducing the show. Then follows act after act ranging from the deliciously absurd styling’s of Scotty the Blue Bunny to some downright bizarre performances from Queen of Hearts, Moira Finucan, to the well oiled (quite literally!) acrobatic performances of Stephen Williams, affectionately known as ‘The Lady Mechanic’. The show also featured hilarious and breathtaking performances from the Wau Wau Sisters. Their trapeze act blew me away. Tearing up the space above the stage to the tune of ‘Welcome to the Jungle’ by Guns’n Roses, the duo tumbled and crawled over and around each other in mid air amid a big cloud of miscellaneous white powder they were huffing from a large bag.

The acts I have mentioned, along with many other, combine to create a debauched mish-mash of fun, fancy and frivolity. It is this that makes La Clique something of an experience rather than a show, and make no mistake, you will not fail to be delighted and amused as well as savagely entertained by this crew.