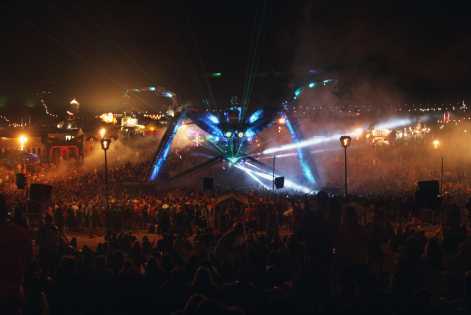 So I was told of a strange hippie festival somewhere in middle England where the love runs free and no one ever sleeps. I went along this year to what was literarily a small scale town complete with suburbia and yummy mummies with push buggies carved out of what was presumably farmland (although, I have been known to assume everywhere outside of London and Manchester to be farmland).
Boasting arguably the most acts – in numbers and diversity – you’ll see anywhere outside of Glastonbury, Boomtown was punching well above its weight and it would have taken an almighty effort by anyone to explore the whole site and take it all it had to offer. Needless to say, I tried, starting with the town centre and its many nooks and crannies including small tents barely big enough to hold 10 people and a faux CCTV window showing porn. It was officially the middle of it all before nightfall Friday when it was upstaged by a giant metal spider drawing all in with thumping bass and techno. This was the Arcadia stage and it went on to play host to Shy FX, Ratpack and Dirtyphonics as well as amazing lights, laser and circus stunts show every night.
More sunshine on Saturday greeted a few weary faces including mine who clearly went too hard on the previous night and found themselves awaking on crushed tents surrounded by empty beer cans or for the slightly luckier ones, tents that had mysteriously turned into the hottest saunas known to man. The news of Beenie Mans cancellation later filtered thu, although by this point binning the programme would probably be a good idea as nothing ran on time but this hardly mattered as everyone there only seemed to care about having a good time and beating the previous nights record of ‘how many cans of bare or recreational substances could be consumed before passing out’ regardless of who was playing where or when.
By Sunday, I had seen the Dub Pistols get up to their usual stage madness, Caspa and breakage tearing thru early sound difficulties, the dazzling Tanya Stephens sing about audience members ‘ding dongs’ and discovered a host of new acts to follow on my return to proper civilization, from Engine Earz on one of the biggest stages to Sykes beautifully delivering several popular tracks in their unique style to an audience of 10 in a room no bigger than my bedroom.
I could easily spend the rest of the article listing the truckload of shall we say ‘interesting’ people or events I came across on my journeys rather than the few big acts I actually managed to see. From the ‘rave police’ soundclashing and market stall sound system to a mechanical fire breathing bull with wheels for hind legs being ridden around by a balding man, these are the people that make this festival what it is and these are the people that help it stand out like a stubborn but wonderful morning glory in the mist of bland corporate festivals. Proudly stuck in the 70’s Woodstock era when press tents and VIP areas didn’t call the shots, I didn’t get the freebies that usually accompanied guest, press or VIP tickets but I couldn’t care less about it and can’t knock boomtown for being true to it’s ideals and staring clear of big name brand sponsors and the prawn sandwich brigade.