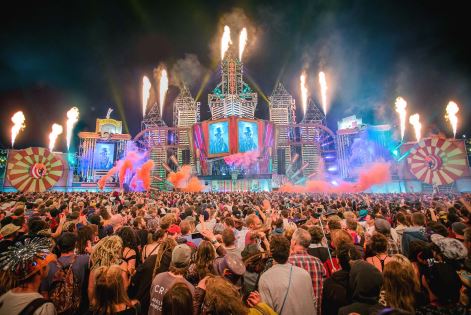 Chapter 7: The Palace Has Risen

It’s safe to say there is no town quite like Boomtown in the UK right now. It is the most everythingist festival. It’s the best, the dirtiest, most imaginative, most wonderful, and most completely exhausting. It’s a fantastical place where sparkles meet grime, where hippies meet garage girls, where falafel meets…rotisserie chicken.

Whilst we did not personally experience it there is a whole area dedicated to kids and families; KidzTown and family camping, dedicated family entrance and special discounted family tickets. The day time activities in the majority of the hilltop area are family friendly with workshops, activities, skate ramps etc.. all available for free for little ones to early teens. Whilst the downtown area and some parts of the night time stuff in HillTop are not suitable for children there is still so much on offer.

The site is split into eleven ridiculous districts; each with a variety of entertainment more crazy than the next, leaving punters wanting to stay for at least a week to fully explore the madness of Boomtown. Each district has it’s own distinct style of architecture (yes it’s an actual town), music, random (I mean….random) style of theatrical entertainment through it’s street venues and sideshows and, consequently, a distinct type of partygoer.

Mayfair Avenue for instance, is the ‘posh’ part of town. A place to put your knees up to a bit of electroswing with the gentry and bust your butt at a vintage remix party with actors and actresses hurling abuse at you as a common Citizen. A lot of fun is also to be had watching those who may have had ‘a bit too much to drink’ taking on Mayfair’s roller disco – Bump.

From psy-trance and techno infested woods, to huge open fields with some of the most impressive stages and open-air sound systems I’ve ever experienced like the Bang Hai Palace. A beacon of power built as a gift from the Comrade Jose the Mayor of Boomtown to the Citizens of Boomtown (yes it’s really quite mad), it is the crowning glory of the festival. The nine-storey monstrosity of a stage is one of the most imposing constructions that I’ve ever seen. With enormous display screens, giant images of the Mayor of Boomtown, it belched 30 feet turrets of fire to the beat of the music – some of the finest drum and bass, rave and experimental electronica in the world including Squarepusher, Noisia and an epic Metalheadz Takeover all of Sunday night.

The story of Boomtown runs deep within the festival. I pledged my allegiance to Comrade Jose at the Town Hall on Sunday afternoon with fifteen other Citizens. After a right good rollocking from the judge myself and four others were sentenced to ‘Enlightement’. I won’t divulge the whole story but I can tell you that it involved some outrageously flirty hippies making us all ‘take’ and ‘receive’ the ‘truth’, a good douse of white sloppy liquid and a lot of feather tickling up my shorts.

The Town Hall also hosted some of the most exciting acts at the festival with Slamboree, the self-proclaimed pyro dub rave circus doing exactly what they it says on the tin – an epic and varied stage performance accompanied by banging tunes and….a wonderful guest appearance from Beans on Toast. Festival experience complete.

I went to an office Christmas party at the Job Centre in Old Town where we played musical statues to blaring Christmas music, hugging people in festive jumpers surrounded by crap decorations. I witnessed the funeral a young man called James who had volunteered to play the part of the deceased in the Church of the Sturdy Virgin. James; an actual normal person, was put into a coffin and lowered into the ground whilst the audience mourned his tragic death. Then we went into the church and sang Queen before James was miraculously reincarnated looking…understandably… a little weirded out.

There was an actual pirate ship that played bouncy Balkan-influenced….stuff during the day (check out Bristol’s very fine Gypsy Unit for some funky gyp-hop) and was the stage for the Invisible Circus’ pirate battle reenactment with fireworks shooting from cannons and aerial performers swinging out into the sky from the rigging.

As you may have gathered…strange things happen at Boomtown. Perhaps the strangest that I witnessed was on the last night, when the music stopped. As my party and I started to make our way back from Distrikt 5 we heard a loud clangy rhythm. We turned a corner and saw around a hundred people banging random objects into a shipping container making a weirdly catchy beat. Then as we walked past the hidden woods – a good distance from Distrikt 5 we found the same happening – this time people had found oil drums and other makeshift percussion instruments. The Citizens of Boomtown had decided to take matters into their own hands.

The creativity, the attention to detail and the sheer scale of this festival is something that has to be experienced to be believed but just a little warning for those who may be used to going to more chilled out festivals and are considering going to Boomtown. As amazing as this festival is, it is unmistakably edgy with a lot of hardcore music and a lot of hardcore partygoers. There is also a pretty serious hill that splits the site with a long stair case on one side and a path on the other which, normally, has a travellator that carries you up the hill for a fixed fee for the duration of the weekend but for some reason this year was cancelled – so do plan your day if possible and I would recommend a reasonable level of fitness/drunkenness ;)

Published on 02 September 2015 by ukfestivaldan