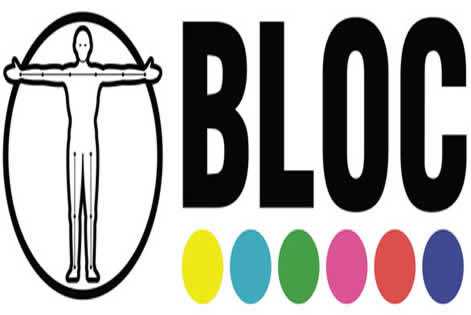 Bloc.2012 at London Docklands: It's hard to know where to start when reviewing a festival that gets cancelled less than halfway through. Do you focus on the, now blindingly obvious, issues that made the shut down and police intervention inevitable? Do you begin with the febrile atmosphere that almost caught light in the main arena when it was announced that the biggest draw of the weekend would not be taking to the stage? Or do you start with the positives, and the performances you did see before BLOC Weekend was prematurely, and disappointingly, chopped down by circumstances of it's own making?

On the face of it, BLOC Weekend could, and should, have been a winner. A rich and varied programme of some of the most the most innovative and ground-breaking, not to say downright brilliant, acts in the electronic, rap and experiment music worlds, gathered together in a new and interesting site in Royal Docklands over two days in July. Not surprisingly, it sold well, and BLOC began to fill up nicely once the post-work crowd piled off the DLR at Pontoon Dock and made the short journey to the main entrance. So far so good. Apparently.

You always get a slightly different view of a place or event when you are there as press, but even I noticed that there were too many security staff on the door, checking for drugs with dogs and leafing through your wallet, and nowhere near enough officials on the actual site. This created such a backlog at the main entrance, I was later told during one of the many periods of hanging around and waiting, that one-day tickets were regularly being upgraded to two-day passes.

Once inside, it was immediately clear that the venues within BLOC were arranged poorly, with the three main music areas crammed into a small corner of the site, leaving whole spaces with, essentially, nothing. Why would anyone bother going to the floating cocktail bar, for example, when it was clear it would take at least 10–15 minutes to get back to anywhere that had anything going on? And then there was the food and drink. Yes, there were bars in the venues. And one outside. But they were small, understaffed and horribly overworked. There were hardly any food stands and...well, I got bored of noting things that could and should have been better. I am an optimist at heart, I wanted to hear some amazing music and the electric buzz of the crowd.

For me, first up was Steve Reich & Bang On A Can Allstars. Classical music, no matter how progressive and out-there, is a tricky sell at a non-classical music festival. But electronic beep-heads are a generous and patient bunch, and after a shaky start involving a pointless hand-clapping piece with the maestro himself and an overly long and challenging cello work played by a lady who was entirely obscured by her music stand (shame, because her winning smile and shiny gold dress could have been so much more appreciated by the slightly impatient crowd), an inventive and entertaining electric guitar duo and frankly mesmerising clarinet piece lifted the set to entirely different plane. I hate to be a naysayer, but Steve Reich isn't actually a great composer, certainly not as good as everyone says, but he gets invited to these things probably because he says yes and because there are so few amazing modern composers who are still alive. However, he hasn't lasted this long without being good, and there was meat in the stew before I had to sneak out to guarantee my place at the next venue. He needs to work on the music stand thing, and remember that one of the most amazing things about live classical music is the breathtaking interplay between virtuoso musicians, right there in front of you – i.e., ditch the one-soloist-and-a-backing-track format. But, overall, it was refreshing and extremely satisfying to see classical music on the stage, and it was appreciated by the crowd.

You know, it has been a while since I was in the presence of a bass so loud and powerful that my eyeballs vibrated and the air stopped in my lungs. It isn't an unpleasant effect, of course, but it does take you by surprise, even if you are half expecting it. The Main Arena had filled up nicely before the curtains were pulled back to reveal what looked like a series of transparent blocks from a futuristic building site on the centre of the stage. And nothing else. There was no time to stop and think about that, however, as the first wave of body-shaking sounds crashed over you and Amon Tobin, Brazilian electronic musician and sound engineer, unleashed the live version of his seventh studio album ISAM (Invented Sounds Applied to Music). It was an extraordinary set, and the perfect synthesis of technology, lighting and music. The blocks turned out to be merely a projection point for an incredible array of visuals that melted, transformed and shook to the ever-evolving architectural monoliths of sound that Amon constructed at a booth within the blocks. Occasionally, his face would be illuminated, to the delight of the crowd, and then disappear again into the mass of images and light. That you felt this music was inevitable, in a literal sense, but it was also impossible not to be swept up into the raw power and invention of what he created. There were two encores, the final one breathtaking in every way. If you get the chance, go and see ISAM; just hold onto your eyeballs...

Eyeballs are pretty much all you see of DOOM's face, and it is strangely endearing that a middle-aged man with a noticeable paunch still performs in a shiny mask that obscures most of his face. But this is the rapiverse, and normal rules don't apply. It was a bit bare just having DOOM up on stage with a simple visual of his videos on a screen behind, but it didn't matter, as he treated us to a masterclass in rapping and interacting with an audience. It was intimate, informal and embracing, for such a big space, and it was obvious that DOOM enjoyed himself. The sad thing was that the audience were not quite fully on-board. It had taken too long to fix what must have been a series of technical gremlins between Amon Tobin and DOOM's sets, and the goodwill that is so necessary between a festival and its massed audience (after all, any festival, no matter how well organised, is massively inconvenient and frustrating to get around) was ebbing away.

After DOOM's final encore, it was obvious that things were slowly, irretrievably going wrong. I was, as always, right at the front, squashed against the barriers and in the crowd. I don't go into the pen if I can help it, partly because it is a slightly annoying place to work – the space is too narrow and there are too many hangers-on and show-offs bouncing around and getting your way trying to take pictures for Facebook with, basically, a cameraphone – and I like talking to the crowd while I am waiting for the next thing to shoot.

After DOOM, a slightly irritated man came on stage to tell everyone that the next act (Snoop Dogg, no less) would be delayed, and we should all take five minutes to leave the Main Arena and wait until they could fix some technical problems. Of course, no-one left and time ticked on. I chatted to the people around me, who were lovely, but not happy. We watched the instruments and decks for Snoop's band being set up and then abandoned.

The temperature slowly climbed and the boos started. Water bottles, belatedly handed out by staff, flew onto the stage like the first spits of a coming rain storm. The gaggle of photographers, girls in sparkly dresses and friends of friends in the pen were pushed further and further away from the stage. Then they disappeared altogether. A camera man on stage looked into the crowd as more water bottles rained down, quickly dismantled his kit and left. And still no announcement.

The air was heavy with tension and I wondered for the safety of my camera. I thought about jumping the front fence and heading out via the pen. But I stayed, and started photographing the crowd. Some of the guys who had been in the pen wormed their way through the increasingly angry audience and started shooting too. A girl jumped the front fence, clambered onto the stage and booed, before she was swiftly removed. And the wave of discontent swelled and grew. These were long, hot, tense moments. We have all heard about crushes, panics, rushed moments in overcrowded venues, and I defy anyone not to have wondered, at least for a second...

A small knot of people appeared on stage, striding through them a woman in a hi-vis jacket. She stood behind a mass of decks to announce that it was all over; there would be no more acts on the main stage tonight. It was inevitable, the rain of bottles and the anger, and entirely justifiable. The announcement was too late and nowhere near understanding enough.

These people, thousands of them, turfed out of the Main Arena after waiting fruitlessly for the biggest act of the weekend, were bitterly disappointed. But it got worse. Of course, this site, so poorly arranged and with so few facilities, couldn't cope with thousands of people at the same time. The police were polite, but firm: The party was over. Time to go home. Pity they waited so long to do decide that, as the last DLR train was about to leave, and there were precious few buses. I was lucky, I got a lift back home, but thousands weren't, and that will stick in the memory longer than any music.