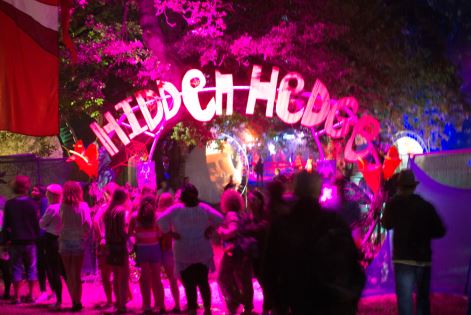 Now in its 13th year Blissfields is going from strength to strength. Winner of best small festival in 2007 and shortlisted for Best Family Festival at UK Festival Awards 2013 its feel is still a small exciting festival with an emphasis not only on a assortment of good music, local food and beer but also a new craft and workshop area where you can try your hand at a pottery, leather craft and even tie dyeing a T shirt! With my tent packed and great weather forecast all weekend I even left my willies behind!

This year’s head liners on the main stage were indie rockers Mystery Jets and for a second year running Bastille. There was a varied range of musicians all over the site, with chilled vibes in the acoustic tent, the Blisscotheque Bus blasting out pop and dance tunes and heavy bass pounding out from the mysterious Area 51 until 4am.

Mystery Jets, freshly back from a US tour supporting Mumford and Sons, drew a good crowd. We were invited to snuggle up close as the sun when down to have a good ol’ sing along. They paid tribute to Blissfields as the first festival they every played and were ecstatic about being invited back.  Away from the main stage in the Bradley Bubble tent Post War Years were blasting out some interesting electronic sounds and Public Service Broadcasting were doing their very best to not actually speak to the audience.

Closing the main stage on the Saturday night was Bastille, again pulling in a big crowed with new found success of their debut album Bad Blood. The band put in a very good performance singing all their crowd pleasing hits with style and energy. With a lot of thanks to the great audience Bastille front man Dan Smith climbed up the sound system to give the crowd a final wave before playing out with their encore “Of the Night”

Away from the music a huge array of activities were going on. Following from the success of Sports Day last year there was a loose overall theme of film entitled “The Directors Cut”. This ranged from daily music documentary and short film screenings, optional fancy dress to an all out Bugsy Malone cream pie fight with winners receiving golden invitations to the evenings Premier Party.  The crafts field enticed you in to try your hand at something new and make a personalised memento of the festival such as a floral woven head garland (they are very “in” this year) or a hand stamped leather wristband. There was also a Blissfields Beer festival in partnership with a local real ale brewery. There was a wide selection of ales, IPAs and locally produced ciders. My personal recommendations are for a Boondoggle (it was tasty as well as having a silly name) and if you are quick enough the special strawberry cider is defiantly worth trying a pint (or four). There was also a decent range of fresh food as well, with a mobile wood fired pizza oven, Blissbugers and organic fair-trade candy floss all on hand.

Overall  Blissfields is a great small festival where you will find a varied mix of families and a relaxing fun weekend, teenagers trying out their festival legs and some old-hands who have done it all and realised that you can get it all and more at smaller festival.