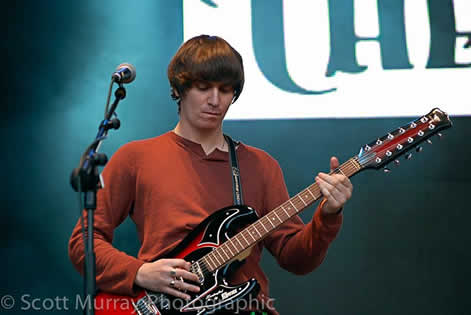 The Yorkshire town of Bingley plays host to it’s fifth music live festival housed in the picturesque surroundings of Myrtle Park. This rural woodland setting would, for three days, feature 2 stages, toilet and baby changing facilities, a family area with arts and crafts, an assortment of food stalls, and what appeared to be the world’s longest bar, which came in useful for its sell out 15,000 crowd. There was no onsite camping however , so for any of those who were over served (shall we say) during the weekend it was a blundering stagger to one of the sites close by. Gates opened on Friday at 5:30 pm, 11:30 am Saturday/Sunday with the last bands exiting the main stage at 10:00 pm ,9:10 pm and 8:30 pm respectively so there was plenty of time for people to make that all important connection or get the young ones home for a respectable hour. The ability to do these was further aided by close proximity to the train station and a free park and ride service.
The first act on the main stage when we arrived on the Friday was High Wycombe hardcore outfit Young Guns who, though looking ostensibly like Mcfly in Slayer T shirts, proceeded to deliver an energetic, exuberant set that held the attention of the gathering masses . Following on shortly was Brighton six piece The Go Team who impressed with their Indie laced Funk Soul fusion (and twin drummers). Before making way for Newport punk rock, reggae, rap, metallers ‘Skindred’ who, after arriving on stage to the 20th century Fox fanfare, delivered a head pounding set that had front man Benji Webbe stalking the stage looking like a hell spawned fusion of Will.I.Am and Rob Zombie. The evenings entertainment was capped off with headliners The Fun Lovin’ Criminals who delivered an effortlessly cool set overseen by the ever charismatic Huey Morgan. Guaranteed crowd pleasers Scooby Snacks, King of Bodega and their signature anthem Fun Lovin Criminal left the audience clapping, cheering and hollering for more. An added bonus for all those who turned up on the Friday was the fact that it didn’t cost any of them a penny! That’s right folks- the whole nights line up was free (which may have explained the later gate opening ). That said we didn’t see anyone complaining.

It was during Saturdays programme that I first began to notice the two things that would be come my enduring images of the Bingley festival. Firstly, a lot of the acts were using two drummers (why is that? I’m genuinely intrigued!) and secondly, I kept seeing huge columns of plastic and paper cups jutting skyward and cutting through the crowd like shark fins. This was happening as part of the festivals green initiative to cut down on waste with the cups being traded in for 10p each provided they were in an acceptable re useable condition. Many of the children in the audience seemed to jump at this potentially money spinning enterprise and went forth through the crowd collecting as many as they could, like bands of Regency-era street urchins. Other green initiatives included the traders offering fair trade and ethical products plus the second stage running on solar power.

Returning to the main stage. Acts of the day included Dione Bromfield, who came to the attention of the media initially for having Amy Winehouse as her godmother and mentor, but has since gone on to impress with her genuinely soulful voice which was evident on the day, with a set that included two emotive covers one being the Shirelles Mama Said and the other was Cee Lo Green’s Forget You. Fans of hip hop and R n B were appeased with a set from South London M/C Rapper Dot Rotten. Texas Four piece White Denim heralded a set that felt like one big folk, blues psych rock fuelled jamming session, before John Fratelli took to the stage (with two drummers) and engaged the crowed with a selection of his hits including his former bands catchy anthem Chelsea Dagger. There were back to back sets from two of the Indie scene’s big hitters. Firstly, Athlete, who attempted to create a health and safety hazard by getting as many of the crowd as they could to sit on each others shoulders and then the Mystery Jets who avoided this potentially expensive compo claim inducing practice but like Athlete didn’t do a half bad job of entertaining the crowd. It was then up to Newports other favourite sons Feeder to show why it is that they are so comfortable on the festival stage with a first rate set that included fan favourites Buck Rogers and Just a Day with lead singer Grant Nicholas clearly enjoying the reaction the band were receiving from the crowd. Maximo Park closed the night with one of their typically energetic and lively performances, finding time between tracks such as Girls who Play Guitars and The kids Are Sick Again to include a new song but to the best of my knowledge singer Paul Smith forgot to mention what it was called. Throw in a firework display to round off the proceedings and that was Saturday in a nutshell.

Our Sunday got underway with Tottenham Rap/Grime merchant Wretch 32 who came onto the stage (with two drummers) before launching into his signature style that included samples from the Stone Roses and ACDC. He was followed shortly afterwards by fellow Londoners The Stereo Mc’s whose own brand of hip hop, electronica and Dance has not dulled or tarnished in any way over the years, giving the crowd a 45 minute rave that was for many one of the pinnacles of the whole festival. That said, with classic tracks like Step up, Connected, and Elevate my Mind getting an airing, it would be hard to see why things would be any different. The Sunshine Underground followed with an impressive soundscape that continues to cement their credentials as the ones to watch, before being followed by Eliza Doolittle, who I thought was an odd choice considering the majority of the other acts on the bill. My opinion counts for nothing however as the pop starlet seemed to hold her own, and be surprisingly well received by the audience. Equally well received was Hoylake’s The Coral who took the audience on a neo psychadelic musical odyssey that included tracks Jacqueline, Dreaming of You and a cover of the Beatles Ticket to Ride. London based drum and bass hip hop collective Chase And Status closed the festival with a visually arresting melding of light, sound and vision, with M/C Rage living up to his monicker by using the ‘f’ word as though it was about to be outlawed. The bands raw energy proceeded to propel the crowd into a frenzy with tracks such as Fire in Your Eyes turning the whole site into a sea of writhing bodies. This breathless set closed the festival and indeed the festival season for us in truly memorable style. A final firework display to round off the proceedings followed by the realisation that it was back to the real world for me in the morning left a bitter sweet taste. But one that had been held at bay by a fine three day event. An event that continues to garner good reviews from the press and the public, helped in no small part by its high standards of production, diversity of acts and the professionalism and friendliness of its staff.

Published on 07 September 2011 by iamchronos